Here is a look at the most compelling images from the Portraits–Stories category of the World Press Photo 2021 contest. 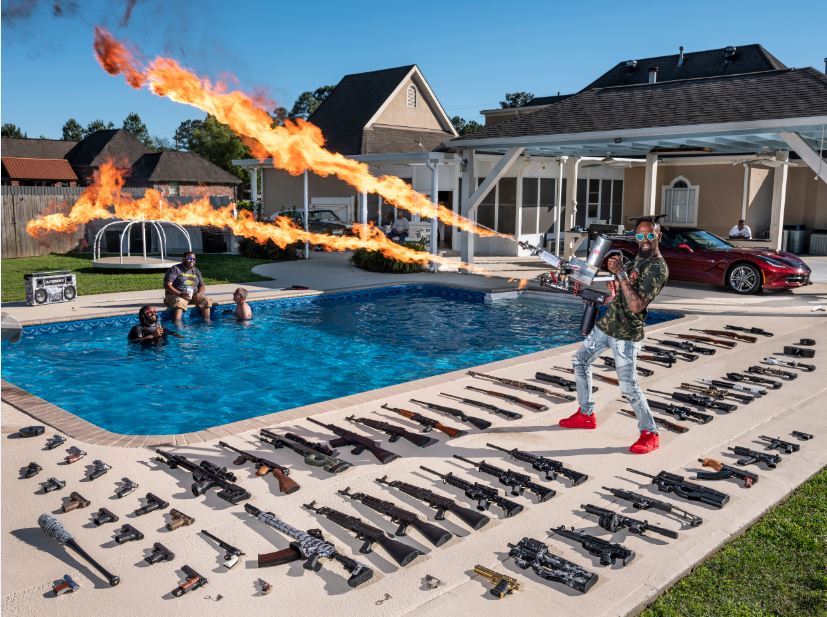 Torrell Jasper (35) poses with his firearms in the backyard of his house in Schriever, Louisiana, USA, on 14 April 2019. A former US Marine, he learned to shoot from his father as a child. 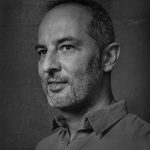 Gabriele Galimberti is an Italian photographer based in Tuscany.
Galimberti’s work mainly consists of telling the stories, through portraits and short stories, of people around the world, recounting their peculiarities and differences, the things they are proud of and the belongings with which they surround themselves. Social media is a fundamental part of the research needed to get in touch, discover and produce those stories. Photograph/Paolo Verzone

The ‘Ameriguns’: According to the Small Arms Survey– an independent global research project based in Geneva, Switzerland–half of all the firearms owned by private citizens in the world, for non-military purposes, are in the USA. The survey states that the number of firearms exceeds the country’s population: 393 million guns to 328 million people. Gun ownership is guaranteed by the Second Amendment of the US Constitution, which dates from 1791 and has long been a controversial issue in American legal, political, and social discourse. Those who argue for the repeal of the Second Amendment or the introduction of stricter gun control say that the Second Amendment was intended for militias; that stronger regulation will reduce gun violence; and that a majority of Americans, including gun owners, support new restrictions. Second Amendment supporters state that it protects an individual’s right to own guns; that guns are needed for self-defence against threats ranging from local criminals to foreign invaders; and that gun ownership deters crime rather than causes more crime. According to the independent Gun Violence Archive (GVA), the US has had more mass shootings than any country on the planet, with 633 mass shootings in 2020 alone. 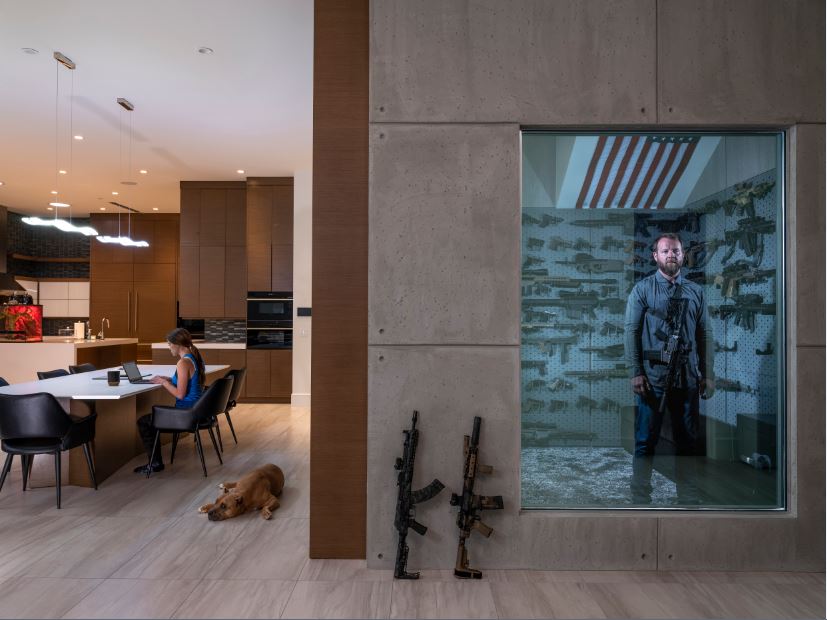 Robert Baldwin Jr stands in his secret gunroom, behind a one-way mirror in his home in Las Vegas, Nevada, USA, on 16 April 2019. His girlfriend, Tori, sits at the table. Robert received his first gun—a .22-caliber rifle—as a gift from his father when he was six. 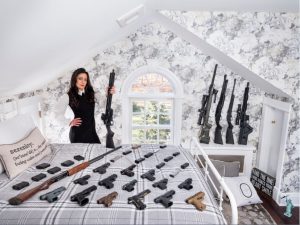 Bree Michael Warner (43) poses with her firearms in her bedroom in Putnam Valley, New York, USA, on 12 January 2020. Bree worked as an actress and TV-show host in California, where she became a National Rifle Association member and a firearms instructor. Now living in New York, she teaches women how to shoot, both for self-defense and as a pastime. 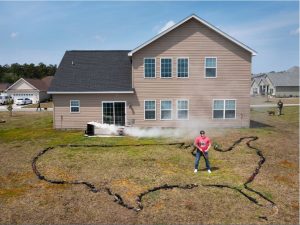 Will Renke (35) stands with most of his firearms arranged in the shape of the USA, in the backyard of his home in South Carolina, on 8 April 2019. Will fired his first weapon—a Fox Savage .410 shotgun, which he now keeps carefully preserved— when he was 10, and now buys a new firearm every two weeks. 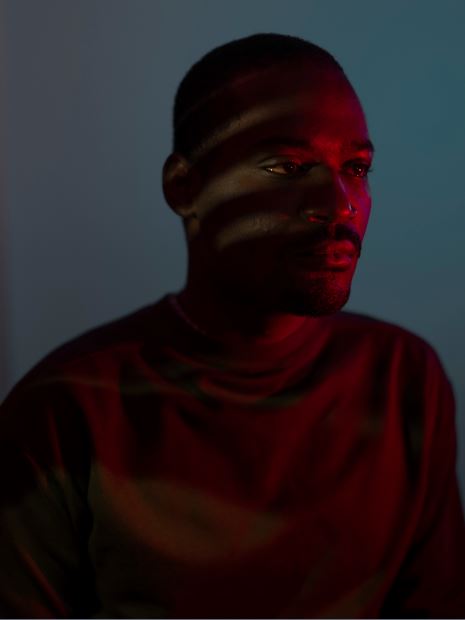 Christ was born in Gabon and came to Italy to study economy at university, in Florence, Italy, on 13 June 2020. 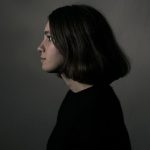 Alisa Martynova is a Russian photographer who lives and works in Florence, Italy. In 2019, she was awarded in the photography category of the Premio Combat Prize and was the second prize winner of the Premio Canon Giovani Fotografi. Her work was shortlisted for the Photolux Award and the PHmuseum Women Photographers Grant. Photograph/Francesco Levy

Nowhere Near: More than one million immigrants from Africa officially reside in Italy, as well as an unknown number of undocumented migrants, many of whom have made a perilous and often life-threatening journey to get there. The photographer compares migrants in Italy to scattered stars, a constellation of young people from different countries, of different genders, and with different traits. They have all come to Italy for different personal reasons and are celebrated for their individual stories, in a way that tries to resist stereotyping of African migrants. A 2016 study by the International Organization of Migrants pointed to insecurity, conflict, and discrimination as the main drivers of migration, not solely economic and work reasons. Discrimination on the basis of social group, religion, or sexual orientation was mentioned by almost half of the study group. In October 2020, the Italian government adopted a decree overturning many of the anti-immigration policies introduced by the previous interior minister Matteo Salvini, leader of the right-wing Lega Nord (Northern League). 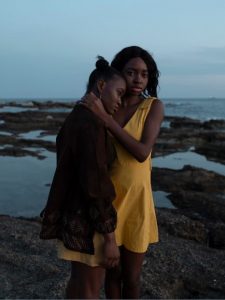 Angel (right) and Gaia are school friends from Livorno, Italy. Both are of Nigerian origin. Angel was born in Italy, shortly after her parents moved there, as her father was setting up a wine business; Gaia came with her parents two years ago, as they wanted her to go to an Italian school. 1 June 2020. 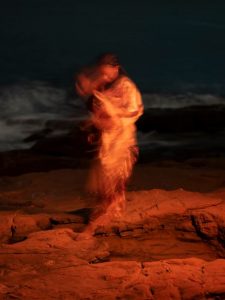 Blessing came to Italy from Nigeria, and works in Livorno, Italy, as a childminder. She is married and has a child of her own. 9 March 2020. 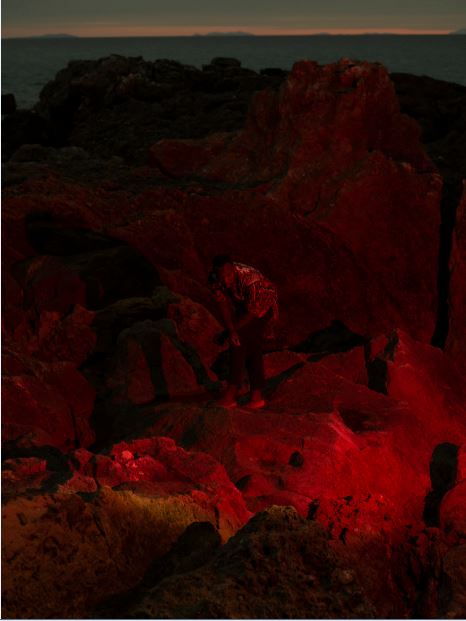 Steve Kevin (who prefers to use the name Clayton) dances at the seaside in Castiglioncello, Tuscany, Italy, on 2 November 2020. He came to Italy from Cameroon to study, and is setting up a dance school to teach traditional African dance. 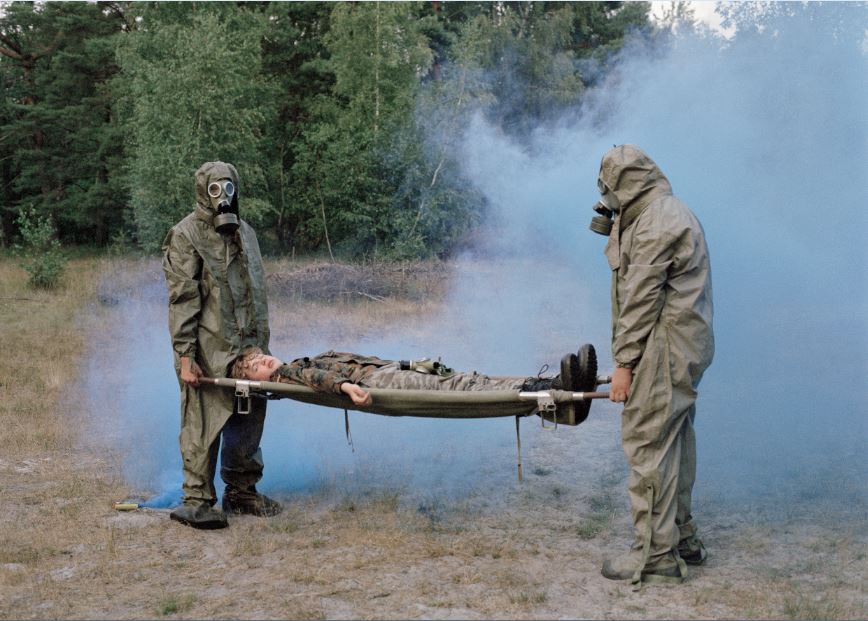 Piotr, Jurek and Tomek participate in an exercise simulating an air pollution emergency, at a summer military camp in Mrzeżyno, Poland, on 7 August 2020.

Niewybuch: Military summer camps for youth have existed in Poland since the 1920s. The young participants are put through boot camps, challenged physically and mentally, and given instruction—often on former army training grounds—in skills such as tactics, survival, self-defense, and topography. They are also taught to shoot, using air rifles and sometimes replica weaponry such as machine guns and grenade launchers. The camps are promoted as opportunities for adventure and recreation, and as character-building and encouraging teamwork. Organizers maintain that participating in games with replica weapons prevents children from seeking out real ones. On the other hand, there is criticism that suggests the popularity of the camps stems from the rise of nationalism in Poland, particularly since the coming into power of Law and Justice (PiS), a right-wing populist party. Patriotism and nationalism play a significant role in school education. 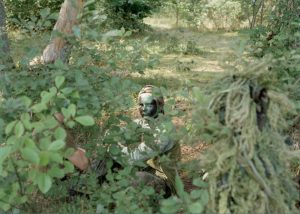 Wojtek practices camouflage at a summer military camp in Mrzeżyno, Poland, on 8 August 2020. 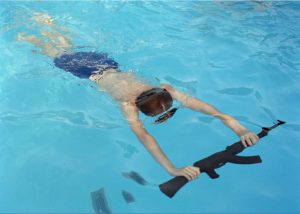 Mateusz practices swimming with a weapon, at a summer military camp in Mrzeżyno, Poland, on 7 August 2020. 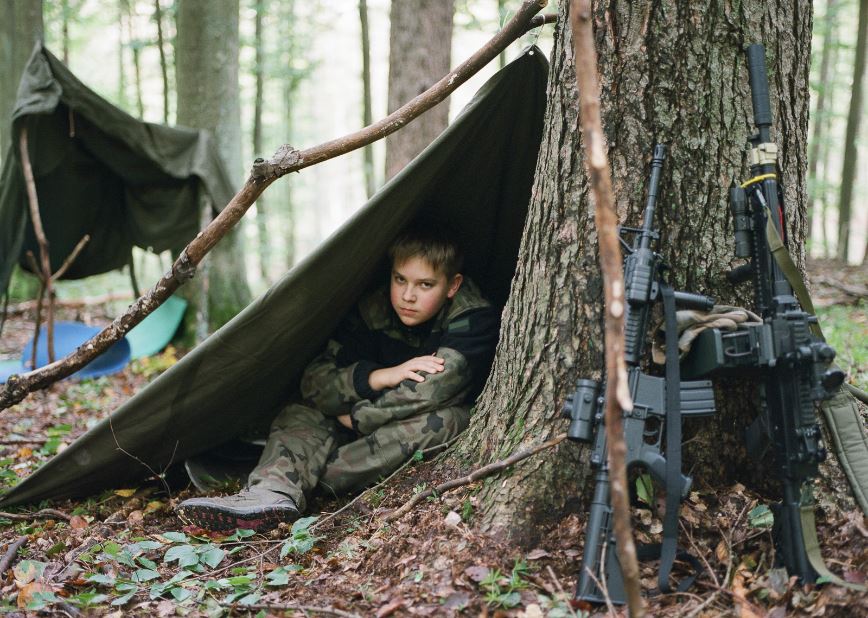 Robert rests in his newly built shelter during an activity at a weekend military club in Żuławka Forest in Gdańsk, Poland, on 17 October 2020.