Here is a look at the most compelling narratives from the Environment–Stories category of the World Press Photo 2021 contest. Firefighters combat a fire outbreak at the São Francisco de Perigara farm, which is home to one of the largest populations of Hyacinth macaws (Anodorhynchus hyacinthinus) in Brazil, on 14 August 2020. About 92 percent of the farm area, mostly dedicated to preservation, was destroyed by the fire. 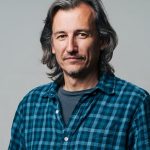 Lalo de Almeida (1970) studied photography at the Instituto Europeo di Design in Milan, Italy where he began working as a photojournalist for small agencies covering daily news. He later covered domestic and international events including the war in the former Yugoslavia. Upon returning to Brazil, he joined the newspaper Folha de São Paulo where he worked for 25 years while producing other documentary projects including ‘The Man and the Land’ concerning traditional Brazilian populations and their relationship with the environment. Photograph/Gabriel Cabral

Pantanal Ablaze: Nearly a third of Brazil’s Pantanal region—the world’s largest tropical wetland and flooded grasslands, sprawling across some 140,000 to 160,000 square kilometers—was consumed by fires over the course of 2020. According to Brazil’s National Institute for Space Research, there were triple the amount of fires in 2020 compared to 2019. Fires in the Pantanal tend to burn just below the surface, fueled by highly combustible peat, which means they burn for longer and are harder to extinguish. The Pantanal, which is recognized by UNESCO as a World Biosphere Reserve and is one of Brazil’s most important biomes, is suffering its worst drought in nearly 50 years, causing fires to spread out of control. Many of the fires started from slash-and-burn farming, which has become more prevalent due to the weakening of conservation regulation and enforcement under President Jair Bolsonaro’s administration. The Brazilian Institute of the Environment and Renewable Natural Resources (IBAMA) has seen its funding reduced by around 30 percent. Bolsonaro has frequently spoken out against environmental protection measures, and has made repeated comments undermining Brazilian courts’ attempts to punish offenders. Environmentalists say that this is encouraging agricultural burning and creating a climate of impunity. Luciana Leite, who studies humanity’s relationship with nature at the Federal University of Bahia, predicts the total collapse of the Pantanal, if current climate trends and anti-environmental policies persist. 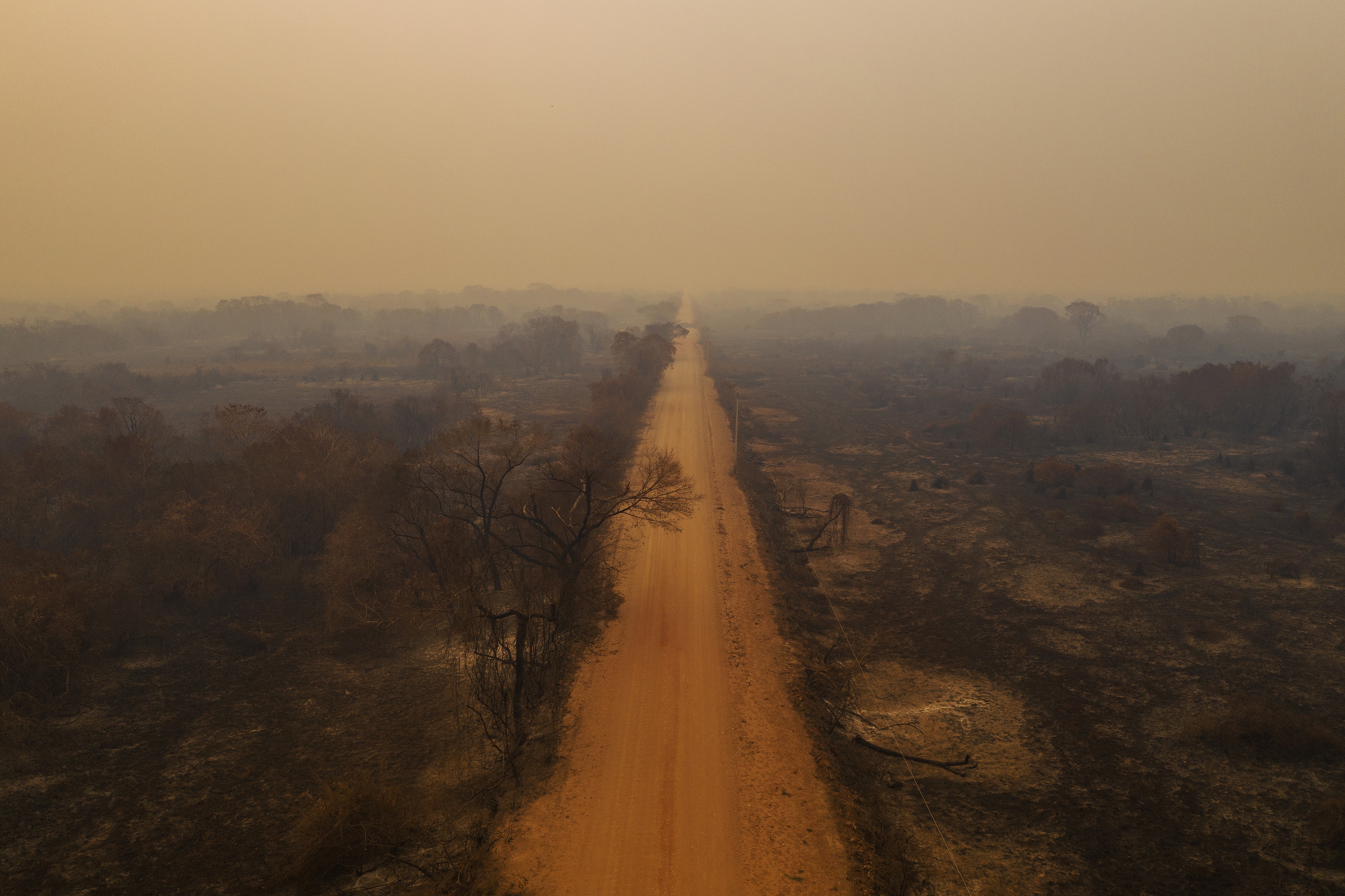 Burnt landscape lines the Transpantaneira, a road crossing the Pantanal, near Porto Jofre, on 5 September 2020. The road is known for its wildlife-watching opportunities. 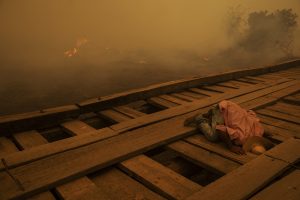 A volunteer looks for fire spots under a wooden bridge on the Transpantaneira, on 13 September 2020. The road, which has 120 bridges, most of them made of wood, is the only access to the community of Porto Jofre and to several farms in the Mato Grosso region. 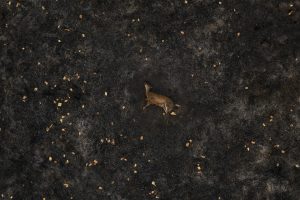 A dead deer lies in a pasture burned by wildfires, on 13 August 2020, in an area of the Pantanal devastated by a wildfire from which even the swiftest of animals could not escape. 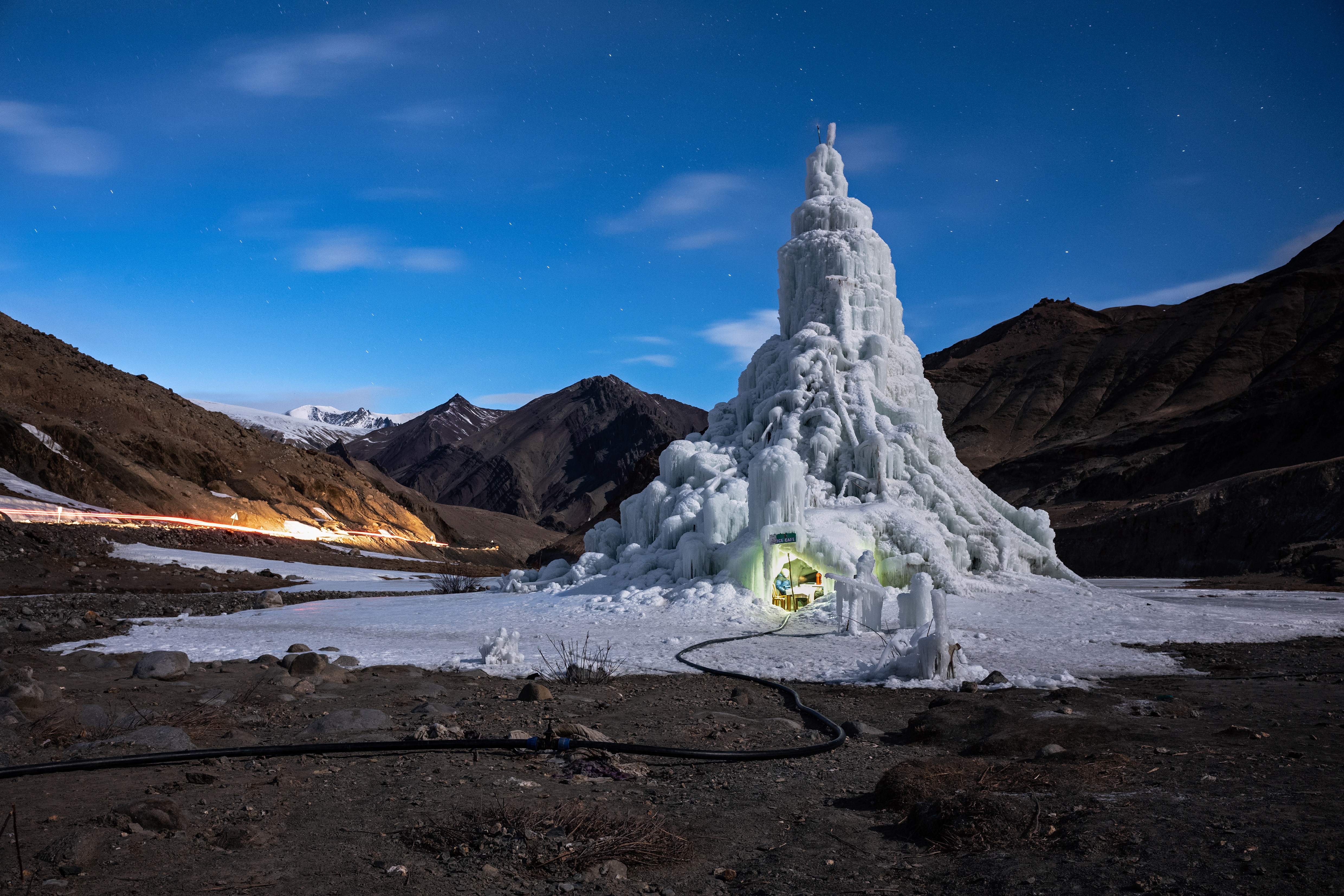 The youth group that built this ice stupa in the village of Gya installed a café in its base. They used the proceeds to take the village elders on a pilgrimage. 19 March 2019. 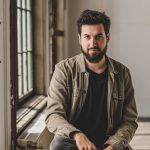 Ciril Jazbec (1987) is a Slovenian freelance documentary photographer. His work focuses on communities that are confronted by the effects of globalization and the climate crisis. In his long-term projects, he aims to raise awareness about the deterioration of our planet and the increasing impact of the climate crisis. He has seen the rising sea levels in Kiribati, the erosion and melting of permafrost in Alaska, and has spent over seven months in Greenland documenting climate effects on the Inuits. Photograph/Primoz Lukezic

One Way to Fight Climate Change: Make Your Own Glaciers: As Himalayan snows dwindle and glaciers recede, communities in the Ladakh region of northern India are building huge ice cones that provide water into summer. Ladakh is a cold desert, with winter temperatures reaching -30°C, and an average rainfall of around 100 millimeters. Most villages face acute water shortages, particularly during the crucial planting season in April and May. In 2013, Sonam Wangchuk, a Ladakhi engineer and innovator, came up with a form of glacier-grafting that creates artificial glaciers in the form of conical ice heaps, resembling Buddhist religious stupas. The ice stupas store winter meltwater and slowly release it for the growing season in spring, when it is most needed for crops. The stupas are created in winter, when water is carried down from higher ground in underground pipes. The final section rises vertically, and the difference in height causes water to fountain outwards, in subzero temperatures, freezing to form a stupa. Stupas were established in 26 villages in 2020, and a pipeline is under construction to create 50 more. Stupa creator Wangchuk says that the stupas stand for a final attempt of Himalayan mountain communities to fight the climate crisis, but should not be considered as a solution to the challenge: that remains the responsibility of national governments, and people adopting environmentally friendly lifestyles to reduce emissions. 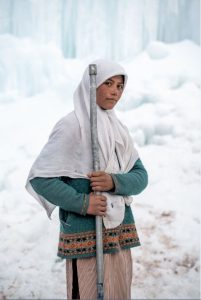 Farida Batool, a student at the middle school in the village of Karith, high in the mountains on the Pakistani border, has helped build several ice stupas, together with her fellow students. 24 March 2019. 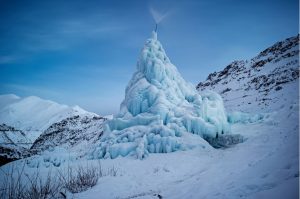 Water spouts from the delivery pipe to form the 24-meter-high stupa in Gangles, near the regional capital, Leh, on 16 March 2019. A member of the Shara Phuktsey team stands on the 33.5-meter-tall stupa he helped to construct, on 20 March 2019. 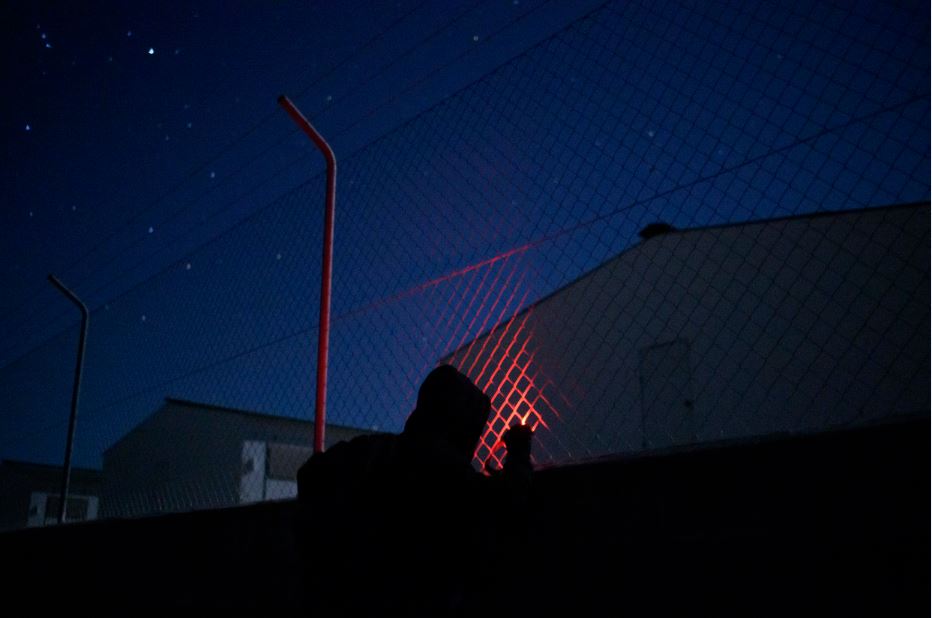 An animal-rights investigator explores the perimeter of an intensive pig farm in Castilla-La Mancha, in order to gain access to the farm and document the living conditions of the animals, on 9 November 2019. 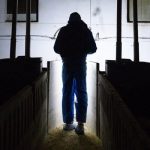 Aitor Garmendia is a photographer focused on documenting the lives of exploited and liberated non-human animals. Through reports and graphic investigations that portray both animal exploitation and animal rights activism, his work offers information for the analysis of speciesism and its consequences. He is one of the contributors to HIDDEN: Animals in the Anthropocene, We Animal Media’s book of photography documenting our relationship with non-human animals in the 21st century.

Inside the Spanish Pork Industry: The Pig Factory of Europe: Spain is one of the four largest global exporters of pork, alongside Germany, the US, and Denmark. The European Union as a whole consumes around 20 million tons of pork annually, and exports some 13 percent of its total production, mostly to East Asia, in particular to China. An EU-funded campaign, Let’s Talk About Pork, has been launched in Spain, France, and Portugal, giving its objective as a drive to counter fake claims surrounding meat production and the consumption of pork in Europe, and to demonstrate that the sector meets the highest standards of sustainability, biosecurity, and food safety in the world. Such standards include guarantees that animals do not suffer pain, and that they have enough space to move freely. Animal rights groups, on the other hand, argue that such practices as routine tail-docking and narrow gestation crates for sows constitute animal abuse, and that animal pain and suffering is widespread. Animal rights investigators say that the industry makes access to farms difficult, and that they are compelled to gain access to such facilities covertly, often at night, in order to document what happens inside. These photographs were taken on a number of such incursions, on different dates, at various facilities across Spain. 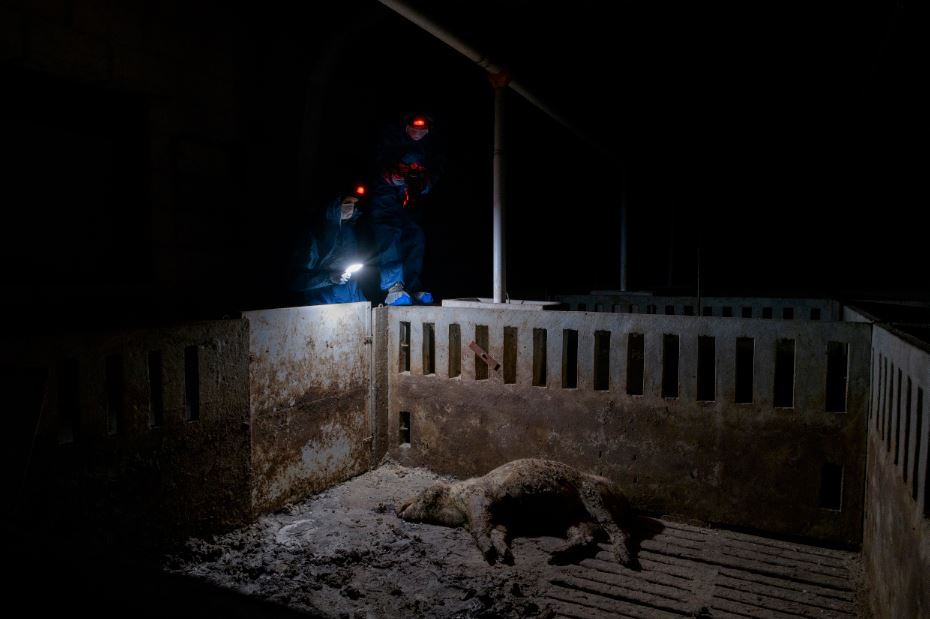 Investigators film a fattening enclosure at a pig farm in Castilla-La Mancha, on 28 February 2020. In November 2019, when they first gained access, investigators found decomposing carcasses. Months later, during a second visit, it appeared that the bodies had not been removed. 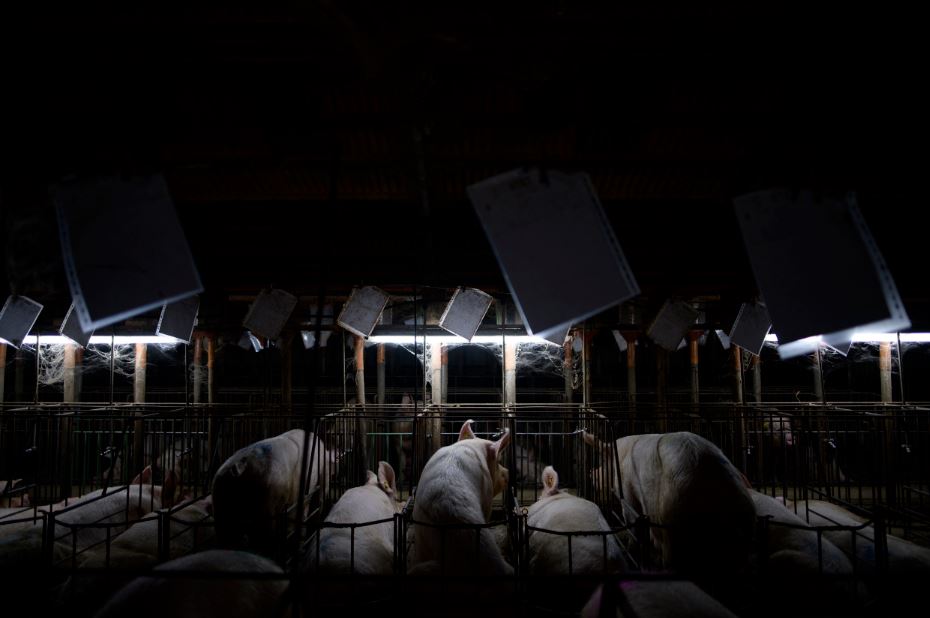 The gestation area of a pig farm in Aragon, on 24 December 2019. European Council Directive 2008/120/EC, relating to the minimum welfare standards of raising pigs, allows the placement of sows in individual crates where they remain immobilized during the first four weeks of pregnancy. Gestation crates are generally arranged so as to accommodate hundreds of sows next to each other. 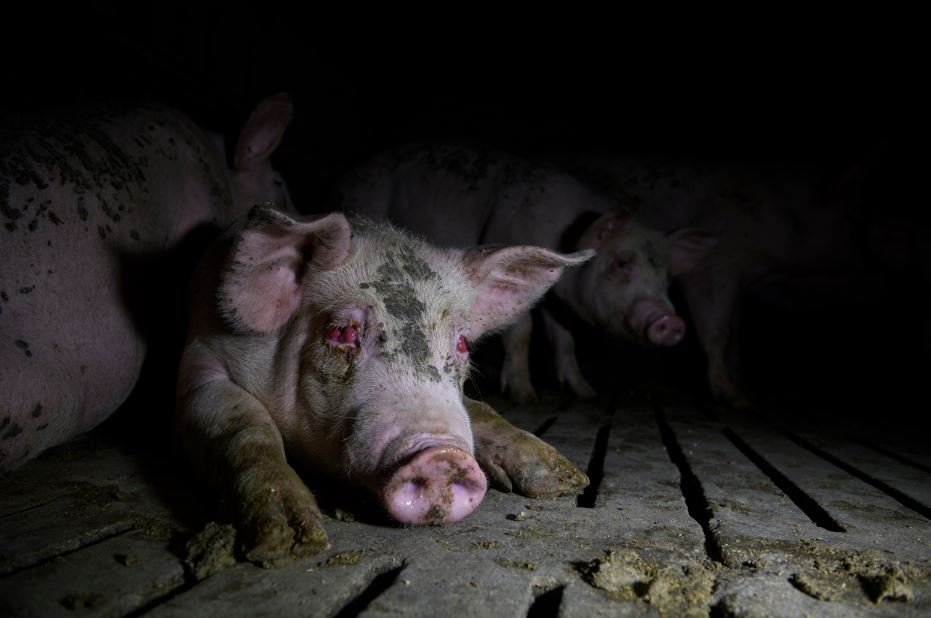 A pig suffering from an eye infection at a farm in Castilla-La Mancha, on 28 February 2020. Inside the sheds, pigs are exposed to gases such as methane and ammonia, produced by the slurry accumulating under the floor of the enclosures, as well as dust from feed and dry fecal matter.