Using an available light source directly behind the couple can help eliminate distracting backgrounds. Underexposing even further will give you this effect. Photograph/Sneha Jayatheertha

There are LEDs, spotlights, floodlights, flickering neon lights and even natural light… you need to know how to make them all look good.

Use White Balance Creatively: In certain light, the ‘wrong’ WB can heighten mood. Auto WB may be great for accuracy, but while shooting in warm light, a setting like Daylight or Cloudy can look more romantic.

Know What to Expect at a Wedding: Be it an indoor sangeet or a twilight baaraat or a ritual at noon, you need to be ready with equipment, techniques and ideas. So get to know more about all this beforehand.

Reach the Venue Early Enough: Not only will this help you conduct a few experiments to get your exposure and techniques right, it will also help you plan your vantage points and angles for making the best use of the existing lighting situation.

To Avoid Flicker Inconsistencies: There may be exposure problems while shooting in fluorescent light because they constantly flicker. Solve this by ensuring that the shutterspeed is not faster than 1/250sec.

Simply Switch on the Room’s Lights: When making formal portraits indoors, creatively use all available interior lighting, be it a bulb, a decorative lamp or a desk lamp. You could even include the light source in your frame for added ambience.

Move to a Better Lit Area: You can always request your subjects to shift to a well lit area. While this sounds almost mundane, it is surprising how many photographers fail to do this.

A Quick Fix for Skin Tones: Overexpose the frame by one third of a stop to brighten your subject’s skin tones. Be careful about retaining details in the highlights, though.

Shoot in the Dark with a High ISO: This will lead to some noise in the image. But it is always better to get the shot than to not shoot at all. Remember that a high ISO is not a substitute for the use of flash.

Change Your Point of View: Avoid distracting lights or unwanted activity in the frame by simply changing your position with respect to the subject. The focused, harsh light on the couple, has amplified the shadows and created drama. Photograph/Vivek Sequeira

Why is a Fast Lens so Important? Lenses with maximum apertures of f/1.8 or f/2.8 are best suited for low light situations. If there are decorative lights in the frame, you can always turn them into bokeh.

Invest in a Hot Shoe LED Light: These small, inexpensive sources of continuous light are effective to fill in harsh shadows at short distances. They also feature variable colour temperatures and can accommodate filter accessories.

Use Umbrellas with Strobe Lights or Flashguns: These are great for lighting large groups. Umbrellas are always better than softboxes or other flash diffusers because the amount of light thrown has a wider spread and is of a greater intensity.

Don’t Fire Your Guns into Smoke: Firing a flash into smoke will only result in terribly washed out patches. Shoot in RAW. Make contrast adjustments later.

Shooting Parallel to Walls: The effect of harsh light can be softened if the subject is moved towards a surface that bounces light back (a wall or a curtain).

In Low Light, Shoot at the Wide End: The wide end of a kit lens offers a larger aperture than the telephoto end, allowing a higher shutterspeed or lower ISO. It also makes camera shake less apparent.

Use Lens Hoods to Avoid Flare: With many sources of light at a wedding, a lens hood becomes a must-have accessory. A dedicated hood will help avoid ghosting from disturbing the frame.

Yet, Do Not be Afraid of Flare: A bit of softness because of flaring can lend an almost dreamy effect to your shots. So try getting shots against the light as well.

Let Sunbursts Create Drama: Sharp, overexposed points of light will cause sunbursts. An aperture of f/8 or narrower will give you better sunbursts.

Use Bokeh in the Foreground or Background: When there are too many lights in your frame, throw them out of focus by using a large aperture. This will make distracting lights seem more appealing.

Combine Silhouettes with Graphical Shapes: Look for frames within frames, repeating shapes, and dramatic shadows to make even a clichéd silhouette look cinematic and grand.

Make Use of Unusual Light Setups: The spotlight in most hotel venues is not an ideal light to work with. However, it can be used to draw attention to a subject in a theatrical fashion. When photographing against the light, you need to carefully consider how to light the couple effectively. Photograph/Prakash Parmar

When in Doubt, Meter for the Face: Take a Spot Meter reading off the couple’s faces, even for large group shots. For the final exposure, compensate very slightly.

Flash Away Mixed LED Light: Coloured LED lights necessitates the use of low powered flash, to get skin tones right, while retaining a bit of its ambient flavour.

Use the Videographer’s Halogens: As a frontal light source, a video light is reasonably effective for stills. Avoid it as a sidelight or a backlight, unless you want the harsh shadows for effect.

Wait Till They Are Lit Up: Often, all it requires is for your subject to simply look up, or in a slightly different direction for the light to appear flattering.

Use the Shade for Softer Light: Harsh light produces shade. If there is large patch of open shade, move your subjects into it to get softer gradation in tones. When photographing against the light, you need to carefully consider how to light the couple effectively.

Retain the Mood of Low Light: At weddings, dim lighting is often used for ambience. The camera’s light meter will automatically brighten things up. You need to deliberately underexpose to retain the low light effect in your pictures.

Bracket Important Frames: When unsure, use Auto Bracketing to shoot three shots at different exposure values, just to be sure you get one right.

Shoot Carefully, But Shoot a Lot: The chances of getting good pictures go up the more you shoot. Don’t waste a moment.

Digital Darkroom to the Rescue! In tough lighting situations, shoot in RAW. If you happen to make a mistake, you can make corrections in postprocessing.

Convert to Black and White as a Last Resort: Despite your best efforts, an important shot may go bad because of poor lighting or clashing colours. In this scenario, try processing the image as a classic B&W photo. 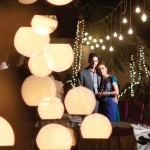 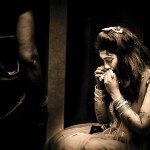 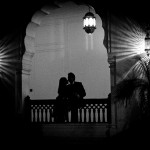 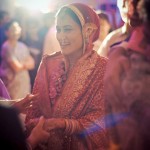 Flare results in an overall loss of contrast. But, when used well, the washed out effect can lend a vintage look to the photograph. Photograph/Kunal Gagwani