To recreate exactly what the eyes see, I make a conscious effort to avoid distortion in the images. Photograph/Romain Jacquet-Lagrèze

Romain Jacquet-Lagrèze takes you on a tour of Hong Kong through images that explore the skyscrapers of the city and leave you awestruck.

This article was originally published in July 2013.

The unique perspective of seeing your surroundings by looking straight up, wasn’t new to me. Earlier, while walking through forests, I would often lift up my head to see what was above. However, this series took shape only after I arrived in Hong Kong. This was a different kind of forest, a forest of buildings. I fell in love with this city, and so, the images are my tribute to Hong Kong.
This series is an obvious reminder of the competitive Hong Kong skyline where each building is trying to be the tallest, the boldest, the most beautiful, the youngest, the oldest or the most famous. Hong Kong is not a place that you can fully explore on the flatness of a map. Here, elevators and stairs that lead people to restaurants, shops, offices, and their homes in these high rises, deserve their own street names.

My Perspective
Vertical Horizon is a photographic exploration of a relentlessly growing city. While wading through our own city, lost in our own thoughts, we tend to not pay too much attention to what is going on above us. Through this project, I wanted to emphasise the large scale of these structures that contrast our own little selves. The photographs have a mix of interesting patterns, perfect geometry and mindboggling reflections. Photograph/Romain Jacquet-Lagrèze

The Process
I already knew which kind of photographs I was looking for, but did not know where exactly I could make them. This resulted in an extensive exploration of Hong Kong across multiple districts to find the perfect locations. Many times, even if I had discovered a good spot, the light would not be at its best. This meant going back to the same location multiple times so that the weather matched up to my expectations. This would often be early in the morning or during sunset, when I would get lovely natural light.
The graphical nature of the images often baffles the viewers making them wonder if the photographs were digitally manipulated. It was very important for me to ensure that the images reflected the reality of what I saw. As a result, I did not indulge in any enhancement or postprocessing.
At the end of the day, Vertical Horizon is more about understanding and exploring essence of the city. It is not a series of images that were made by simply pointing the camera at the sky. For me, the meaning of this series runs quite deep, as this city is a reference to how we grow as people. Our lives are like buildings; we start at the bottom, and as we reach for the sky we realise that our foundation is crucial to our success.

My Equipment
I used a Nikon D5000 along with a Sigma 10–20mm wide angle lens. I avoid using a tripod as it was important to be as free as possible when shooting. The endless repetitive patterns in these structures has a reverse vertigo inducing effect. Photograph/Romain Jacquet-Lagrèze

Tips to Photograph Your City From A New Perspective 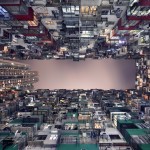 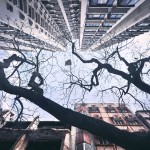 Other than skyscrapers, the series also showcases the widely diverse The series is environment of the city. Photograph/Romain Jacquet-Lagrèze