There was water all over, all over the camera, all over me. Techniques are alright, but beyond a point, one has to smell the action to really get into its visual soul. Photograph/Raj Lalwani

Raj Lalwani experiences the Raid De Himalaya 2016, one of the grand chapters in the Indian motorsporting calendar, and comes away, with a few photos and some thoughts.

There was a brief while, on the way to Kaza, when a tiny voice inside of me seemed to give up. This isn’t something I can do, said that voice of doubt, a thought that has almost never come to my head. Mountain sick, car sick, I decided I was just sick of this in general, as I blinked through my fourth night of no sleep straight, holding onto my camera, almost as if it was that one spot of comfort, one air of familiarity. Exhausted, exasperated, I threw my head back and wondered if this was what the Raid was about, the Raid de Himalaya that the fun fellows at Maruti had invited me for, the motorsporting milestone that gave my friends a hint of a goosebump and a spark in their eye, when I told them that I was going to photograph it. And there it was. As I threw my head back, I started to witness the great gig in the sky. I saw stars. Real ones, not the ones caused by all the sleeplessness.

And there I remembered something that the great Prabuddha Dasgupta had said, that it’s not always easy. “Nobody said it was going to be easy, but that’s just half the joyride. The part of the adventure is the non-conclusiveness of what we do. Because once you get it all right, that’s when the adventure is over.” That night, fellow photographer Ishaan and I stayed up till the wee hours of morning, setting up a tripod in the biting cold of –7 degrees, to watch those same stars, glide by, while we greeted the officials of the Raid, as they prepared for the start of the next morning. In all my exhaustion, in all my exasperation, while I continued to doubt whether this kind of a rally was for me, a part of me realised that this kind of a rally was me. The equally sleepless motorsport champions I met that night were crazy, just like us photographers, for it is only insanity that can explain love and passion that’s so strong, so infallible. 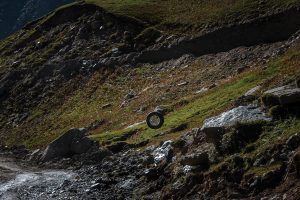 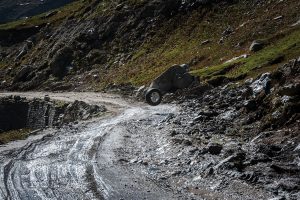 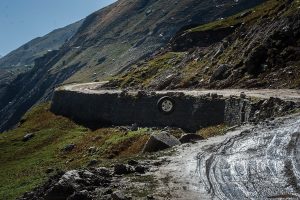 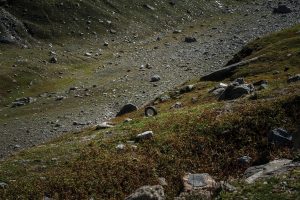 Cars and bikes have never really fascinated me. I’m someone who much rather prefers an amble. Speed is an antithesis of how time flies around me, and the whole idea of adventure, for me, is only in my head. But we forged a connection, the next morning, as I spent time, chasing cars, dust and gravel in the air, and water all over me. The rush, the thrill that I never fathomed, of a road rushing past when you are in the zone of a good drive, is pretty much the same as the high that one encounters when a good picture beckons and says hello. It’s not always easy, I remembered, the next day, as we got a grim piece of news. Motorcyclist Subhamoy Paul had crashed into a boulder in an unfortunate accident. He passed away on the spot. In solidarity, the remaining hapters of the Raid were called off, Paul’s tragic demise being a somber reminder of the caution and responsibilities that every kind of thrill brings. But that is what it is with journeys, both literal and figurative, both in motorsport and in photography, we don’t know where we are going, but we have to continue to wander, with a continued sense of wonder. To do what one is in love with, to traverse through various paths, steep, unrelenting ones, not so much to get where we want to, but to enjoy the ride. 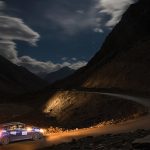 The rally drivers and riders had their own machines, while the photographers and press followed them in a Maruti S-Cross. Some evenings weren’t as demanding, and allowed us to photograph our own journey as well. Photograph/Raj Lalwani 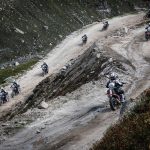 The Himalayan terrain is undulating and unforgiving, much like the path to anything that is worthwhile . Photograph/Raj Lalwani 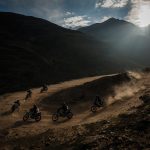 Sequence photos have always fascinated me, for they chart not only where we come from, but also where we go, with all the dust and drama that follows. On the right, was a bizarre and rare sight of an entire wheel flying off, the way the car recovered, being a story of great resilience. Photograph/Raj Lalwani 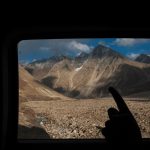 Every kilometre brings a new photograph, the window of the car presenting a frame. Photograph/Raj Lalwani 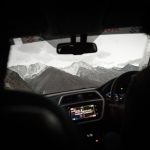 As the terrain changes, as does the background, as did our visual approach. Photograph/Raj Lalwani 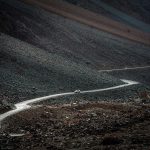 The Adventure category was not as extreme as Extreme, but a relatively more languid race is still a race. Photograph/Raj Lalwani