There may be lots of moments during your travel when you have to wait for someone or something to begin. Do what Dinesh Khanna does at such times. “Whenever I have to wait for someone, I don’t just stand in one place, I walk around, look for a potential subject that I can photograph.” Photograph/Prashanth Vishwanathan Shot with: Apple iPhone 6s Plus

A journey without pictures is unimaginable…Natasha Desai suggests a few practices that you can apply to your cellphone photography during your travels, wherever they may take you.

Whether it is a vacation with family or a road trip with friends, photography and travel are intrinsically linked. And, with our cellphones, chronicling has become even easier. So, whether you head to the mountains or to the beach in search of nirvana, we have a few ideas that you could use to make your cellphone travel diary truly distinctive.

Find One Thing to Concentrate On
There are a tremendous number of things to take in when visiting a new place. Sights, sounds, fragrances, colours, people… the urge to capture it all can get overhwleming. You could cut through it all and pick one thing to shoot through the trip, whether it is the colours that you consider in your composition or the striking faces you see around you.

Take Inspiration From: Pierre Poulain— “Can you achieve one photograph where you don’t have to explain, where it is so simple and you do not need the mercy of words to tell your story? If not, then your photograph is not simple enough.”

Do the Opposite
The point of view of the image is determined by an individual’s height. On your trip, experiment with vantage points you would not normally shoot from.

Use a New App
This Time This sounds like a simple idea, but one that is not explored enough. You could use apps that completely transform photos like Glitchr, Polar Panorama, Mextures, amongst others.

Chase the Light
The early morning light and the golden hour have a beautiful quality to them. With the shadows that come with it, you could make the light a graphical subject in your images.

Take Inspiration From: Daido Moriyama— “When I walk around I probably look like a street dog because after walking around the main roads, I keep wandering around the back streets.” Sometimes the most simple, ignored aspect like the clouds can tell a story about a place. “Any artist picks and chooses what they want to paint or write about or say. Photographers are the same,” said Richard Avedon. Photograph/Arati Kumar-Rao Shot with: Apple iPhone 6s

Tell the Story Minimially
A typical travel diary includes pictures of everyday scenes, people, and food. Make sure that the elements in your image are interacting with each other as little as possible and make creative use of negative space.

Take Inspiration From: Mary Ellen Mark— “The background can sometimes fight with the subject. When you’re in a crowded area, you have to separate the elements: move around and layer a crowded frame to place things at different distances and angles.”

A Unique Point of View
Search Instagram for images of the place that you are visiting. With so many uploads, it will give you an idea of what not to shoot!

Take Inspiration From: Diane Arbus— “I don’t like to arrange things. If I stand in front of something, instead of arranging it, I arrange myself”

Be Unafraid
Shoot genres that are outside your comfort zone on your travels. If you shoot nature, try architecture or people instead.

Take Inspiration From: Martin Parr— “I often do not look at people I photograph, especially afterwards. Also when I want a photo, I become somewhat fearless, and this helps a lot. There will always be someone who objects to being photographed, and when this happens you move on.”

Find a Single Point of Focus
Whether it is a particular trait of the city, a repeating shape or motif, shoot just the one thing that is a unique characteristic of that place.

Take Inspiration From: Rene Burri— “…Go and cover things that nobody else is thinking about. Put your nose into things… the fantastic thing about photography is that you are able to freeze a moment that can never come back .” 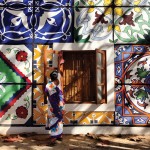 Walker Evans found, “There are infinite possibilities both decorative in itself and as popular art, as folk art, and also as symbolism and meaning and surprise and double meaning.” Look for the characteristics of the place you are visitng with a keen eye. Photograph/Ritesh Uttamchandani Shot with: Apple iPhone 5s 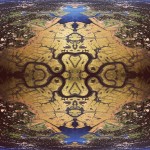 Have fun with your images like Elliott Erwitt said, “I’m not a serious photographer like most of my colleagues. That is to say, I’m serious about not being serious.” Photograph/Prashanth Vishwanathan Shot with: Apple iPhone 6s 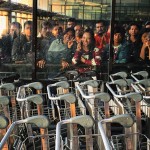 Avoid cliches of a partiular place, as Alex Tehrani says, “Anyone can shoot chaos. But the most perceptive photographers can make compelling pictures out of uninteresting moments.” Photograph/Prashanth Vishwanathan Shot with: Apple iPhone 6s Plus