Thousands of spectators gather to watch the Pulikali performers, some joining in the dance as well. Photograph/ T Narayan T Narayan is an independent photographer, who has covered some of the most important sociopolitical events in India for more than 25 years. He started his career as a Senior Photographer for ‘The Times of India’, and went on to head India’s leading newspapers and magazines like ‘Hindustan Times’, ‘Outlook’ and ‘India Today’ as the Photo Editor.

T Narayan captures the spirit and colourful frenzy along with the hours of work that goes on behind the preparations of the Pulikali festival in Kerala.

This article was originally published in June 2016.

Pulikali, translated as the frolic of the tigers, is a festival celebrating Onam in Thrissur. Performers are painted in vibrant colours to resemble the formidable animals. They then dance to the beat of the drums, as they make their way about the city. This festival dates back to 200 years ago, when the Maharaja of Cochin wanted to show off the masculine spirit of his armed forces.

The artists start painting early in the morning, and the entire process takes about seven hours to complete

My purpose was to capture all the tremendous effort it takes to make this festival happen. The body painting begins early in the morning. The proverbial tigers are brought to life through the skill of the artists who paint through the day.

These days, the performers also wear face masks to enhance the overall effect.

The entertainers, too, have to stand for hours as the paint dries. I noticed that as each layer of paint was coated, the men start getting into their roles by roaring at each other and even scaring children!

This build-up to the festival is often overlooked and I hoped to do justice to their endeavour through my photographs.

– As told to Natasha Desai 74-year-old Chathunni said he used to have a huge belly, but with age it has reduced. Photograph/ T Narayan

Tips on Photographing a Festival from Behind the Scenes 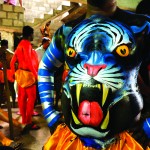 The artists are paid on the basis of the size of their bellies. The bigger they are, the higher they are paid. Photograph/ T Narayan 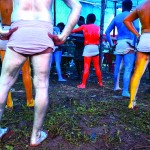 It take two to three hours for each layer of paint to dry, and each performer goes through several layers of it. Photograph/T Narayan 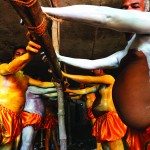 Since the men have to spend hours standing while the paint dries, they use bamboo sticks for rest and support. Photograph/T Narayan