The Dazzling vivo X50 Pro: So Much More Than What Meets the Eye

The technology under the hood of the sophisticated vivo X50 Pro can make a photographer just out of anyone. K Madhavan Pillai and Conchita Fernandes give you a preview of its ingenuity. 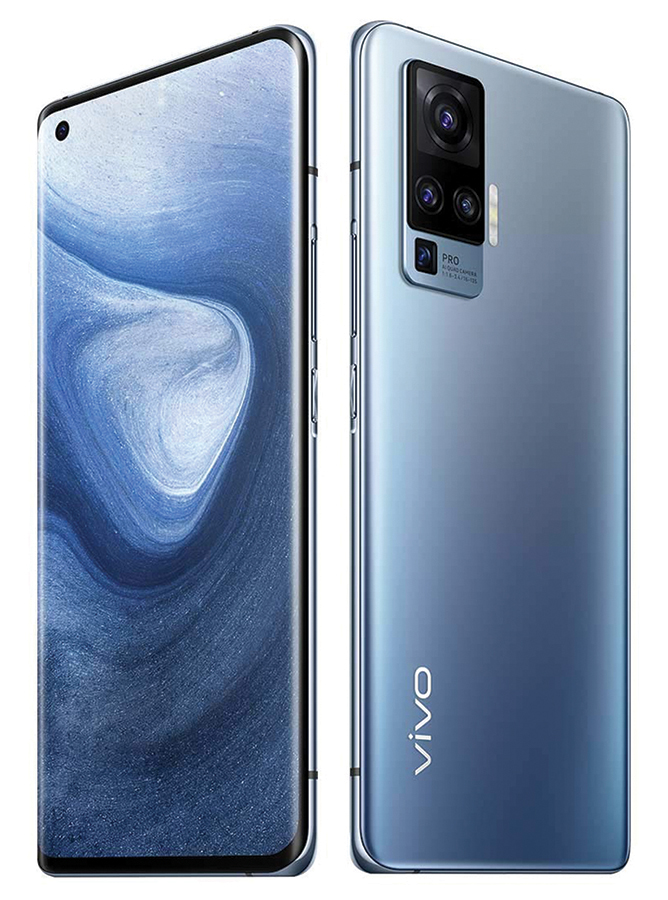 One of the things that makes photography so endearing and dynamic is that it allows us to freeze moments in a world that refuses to stop moving. With the constant reverberating threads that bind us to this state of unfolding moments, the tools that we use to slow down time and create evidences of moments has changed over the years. With the advent of smartphones, the camera has morphed into an object that is not just with us at all times, but a device that we continue making demands of especially with regards to how we choose to make photographs. 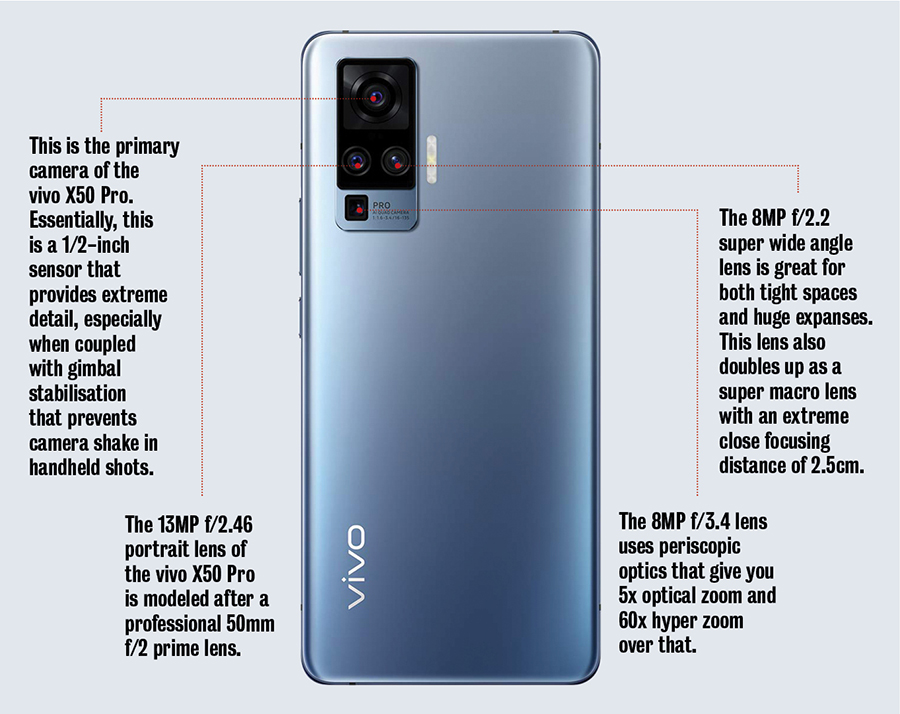 vivo is one of the few companies that has attuned itself to the needs of photographers, and now with its latest phone, towards videographers as well. Since its inception in 2009, it has brought about incremental changes in the camera technology employed in its phones. It was the first company to introduce the pop-up selfie camera in 2018, and very recently launched the first ever use of gimbal technology for stabilisation in phones, in their latest offering, the vivo X50 Pro.

K Madhavan Pillai, Chief Editor of Better Photography and I, Conchita Fernandes, Senior Features Editor, took the X50 Pro for a spin to see just how well the camera works in different environments.

The vivo X50 Pro showcases excellent dynamic range in the way that its camera is able to resolve detail, both in colour and texture. Photograph by Conchita Fernandes

How the vivo X50 Pro was used to photograph the Main Cover of the October issue of Better Photography
The Astro Mode in the X50 Pro works on vivo’s Sky Divider algorithm that separates the sky from the ground, shoots multiple frames of the starry sky, and then assembles them back together through an alignment algorithm. This removes any smear on the stars caused by the earth’s rotation during long exposure, while keeping the ground image clear with rich details. 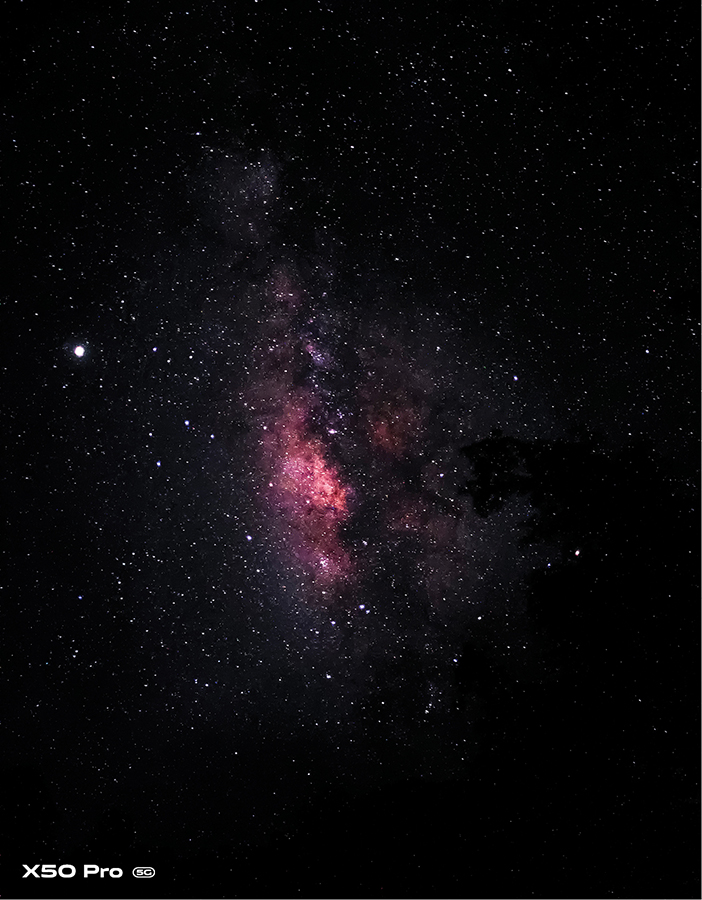 Rakesh Pulapa’s photograph of the celestial nightscape of the Milky Way galactic center was made using the vivo X50 Pro’s Astro Mode, in the forests of Maredumilli in Andhra Pradesh. Photograph by Rakesh Pulapa

Award-winning travel photographer Rakesh Pulapa photographed this celestial nightscape of the Milky Way galactic center in the forests of Maredumilli in Andhra Pradesh. For him, the magic was revealed by the beauty of the pitch-dark forests and clear skies. “The image was made in July on a day where it poured heavily until 10pm. An hour later, the sky cleared up considerably and I was able to see the Milky Way. Immediately, I set up the vivo X50 Pro on the tripod and using the Astro Mode in the phone, I was able to make the photograph,” Pulapa recollected. 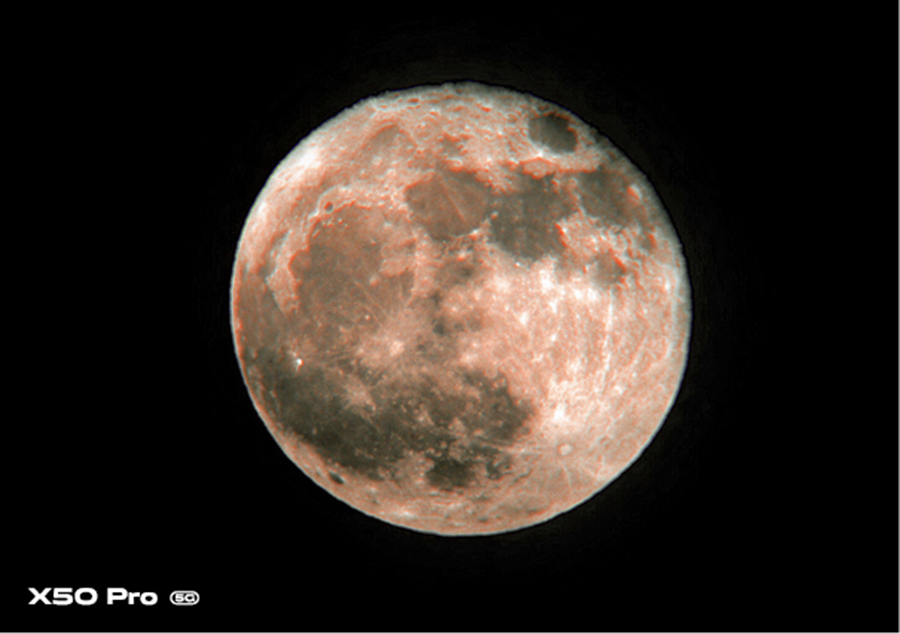 This image was shot using the Supermoon mode in the vivo X50 Pro. Photograph by K Madhavan Pillai

Gimbal Stabilisation… the First of its Kind
The vivo X50 Pro’s gimbal system, an industry first, is more effective than conventional stabilisation systems in phones. Unlike the lens-based cameraphone stabilisation systems, in the X50 Pro, the entire camera module is stabilised with the help of a double ball suspension that allows for movements of +/-3°, which is three times the angle offered in most phones. Moreover, unlike the 2D alignment in the X and Y-axis in traditional OIS, the gimbal accounts for a third axis of movement, that is, the Z-axis.

The Revolutionary Gimbal Stabilisation
The vivo X50 Pro comes in a classy glass exterior with a quad-camera setup that is placed on the rear corner of the phone. The 48MP f/1.6 primary lens sits on top of the tier, reminiscent of a ‘big eye’ that serves as a unique signature design element. The lens houses the Sony IMX598 sensor (one of Sony’s top rated sensors) that delivers more light and an increased signal-to-noise ratio for better image quality at night, and is also the one that contains vivo’s pathbreaking gimbal module.

The gimbal stabilisation is one of the stand-out features of the vivo X50 Pro. It can be activated in settings under the ‘stabilisation’ feature, and upon doing so, an animated ball appears on the camera interface that reflects the movement of the gimbal. Photographers can use it as a guide to shoot clear, stablised images or videos by making sure that the ball is always at the center of the concentric circles on the screen; a brilliantly implemented feature.

One would think that gimbal stablisation would benefit only videographers, but the vivo X50 Pro shows you the difference brought about by the gimbal stablisation when photographing stills. I found it to be particularly beneficial in situations where light was scarce. Phones, generally, don’t perform as well when there’s a dip in the levels of light and often render images that are blurred or shaky. But with the gimbal stabilisation in the X50 Pro, you get up to 3.64 stops of image stabilisation. What is expected of you is that you remain absolutely still while the image is being rendered, which can take a few seconds depending on the nature and availability of light. 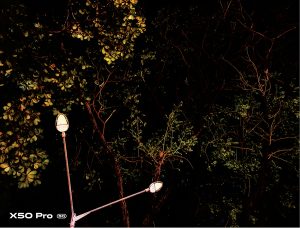 This image was shot using the traditional Photo mode on the vivo X50 Pro, and underexposed to simulate the conditions of the actual scene. Photograph by K Madhavan Pillai 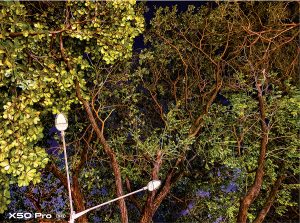 This is the after shot to the image below, shot using the Extreme Night mode of the vivo X50 Pro along with the activated gimbal stabilisation. The Extreme Night mode automatically activates when the light level goes below a certain point. The ability of this mode to gather light and make a detailed, good exposure is striking. Photograph by K Madhavan Pillai

In the two photos above made by Madhavan, you can see the before and after images of the same location, shot using the Extreme Night mode with gimbal stabilisation. What is visibly evident, aside from the tactfully sharp image, is that there is a fair amount of colour enhancement brought about by the improvement of light. The Extreme Night mode offers four styles—Black & Gold (for its sophisticated look), Blue Ice (for its cool and calm look), Green Orange (for its mix of warm and cold colours) and Cyberpunk (for its futuristic look).

Whimsy and Spectacular Night Portraits
Below the 48MP lens sits the 13MP f/2.46 portrait lens. The Portrait mode offers a bokeh feature with various specular effects ranging from circles, hearts, triangles, stars and pentagons. When making the portrait, you are expected to be at a distance of 0.5 to 2.5 meters from the subject to obtain best results. To test how well the bokeh mode worked, Madhavan photographed Nilofer in various spots in Bandra. What I liked about the Portrait mode is how it smoothly rendered the background blurry without making the subject, in this case, me, appear like a cutout. The other feature that I thought was extremely helpful was the prompt provided by the phone upon initiating the Portrait mode. A circle and a white circular patch appear on the screen, and the idea is to move the phone around until the white patch appears in the circle, upon which the phone automatically takes a picture. However, you can choose to not adhere to this and make a picture anyway, but this added feature helps for better compositions. There are also different styles or filters offered in the Portrait mode, namely, Vintage, Northland, Fashion, Summer Party, Japanese Style, Monochrome, Silver Salt, and Wet. The filters are modern and calibrated to produce the effect that it’s supposed to. 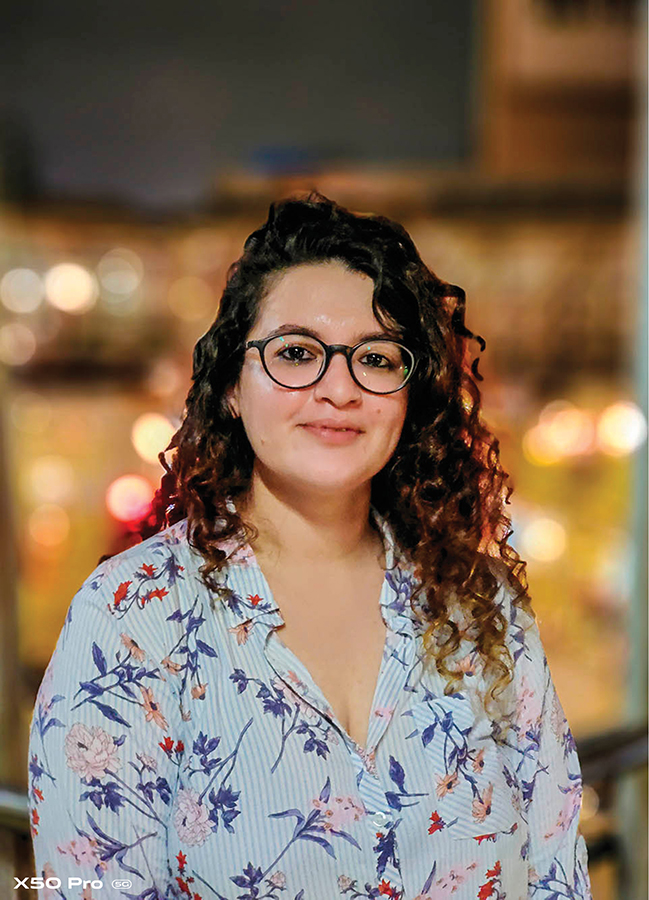 The Portrait mode in the vivo X50 Pro offers a variety of bokeh effects to add a dash of whimsy to your photographs. There are also eight interesting filters to experiment with different hues. Photograph by K Madhavan Pillai

“The details and realism of the bokeh on finding the right background is spectacular.” -K Madhavan Pillai

Closer Than Ever with 60x Hyper Zoom
Periscopic cameras in smartphones employ a prism mirror system that extends the focal length of the lens without causing any protuberance at the rear of the phone, thereby providing greater optical zoom than what is typically available in smartphones. The 8MP f/3.4 periscopic lens that sits on the bottom of the camera tier on the vivo X50 Pro offers 5x optical zoom and up to 60x digital zoom. Handheld, the phone promises stability at up to 30x digital zoom, beyond which it would be advisable to use a tripod for better stability. The images below were made at different zoom lengths from the rooftop of a high rise building overlooking the dockyard in Mazgaon, Mumbai. 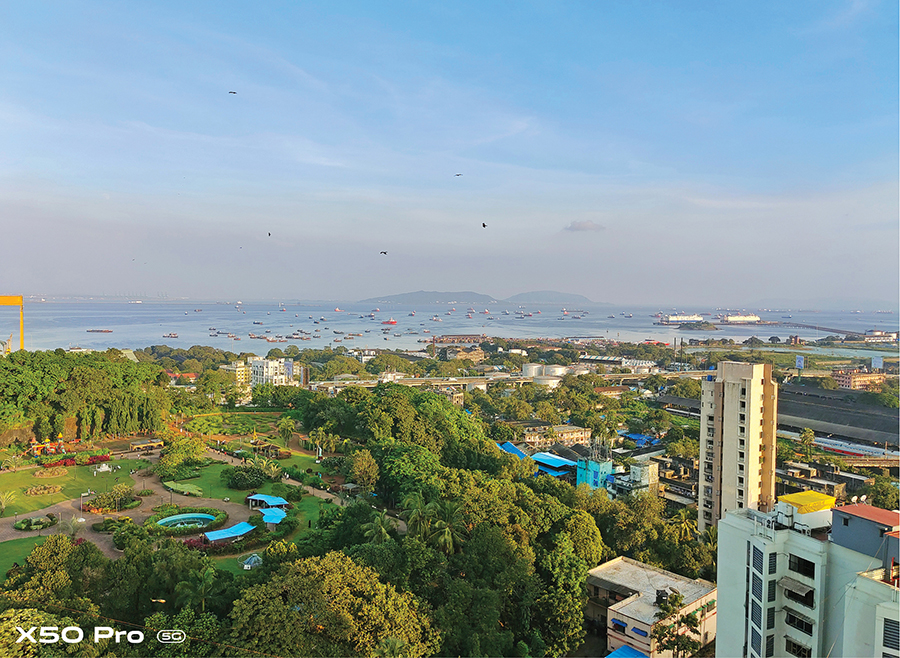 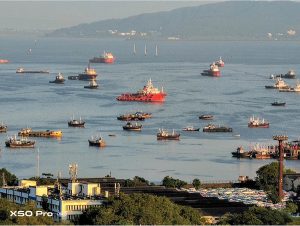 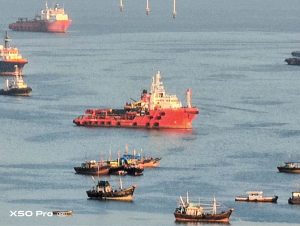 The zoom feature is great if you want to photograph a performance on stage or intricate details of monuments or even dabble in a bit of architecture photography by concentrating on the compactness of distant buildings and apartments.

The Intimate World of Macros
The vivo X50 Pro offers the ability to shoot macros with its 8MP f/2.2 super-wide angle lens that is located right beside the portrait lens. In a well lit environment, the lens can focus clearly at a distance of 2.5cm, and produce intricate details unlike most phones. Madhavan, who photographed a variety of leaves and plant matter in his garden, advises photographers using the Macro mode to ensure that the phone is absolutely steady. Use a tripod if you have to, to get best results. If not, make sure that you are at least in a position where you are physically comfortable. 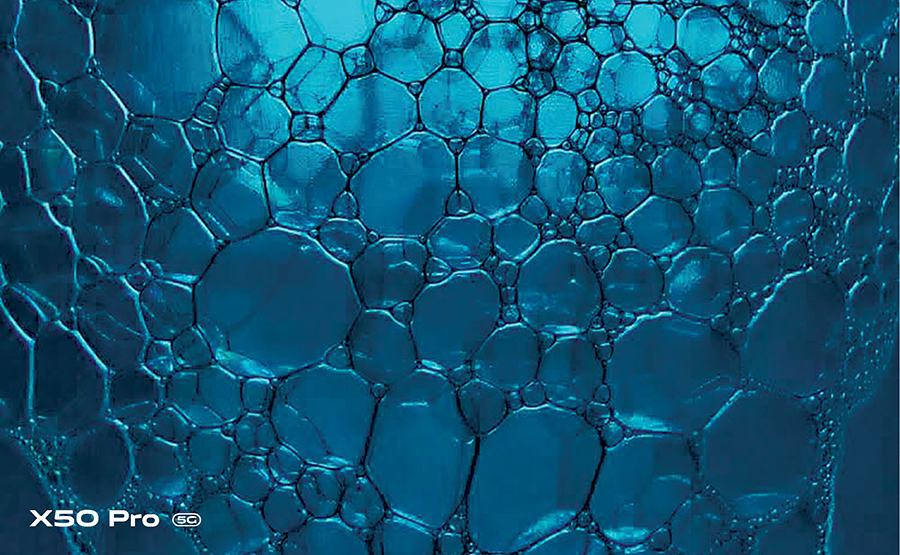 The Macro mode in the vivo X50 Pro brings out an incredible amount of detail and textures when used in good lighting. Photograph by K Madhavan Pillai 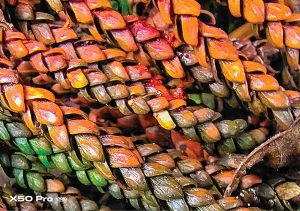 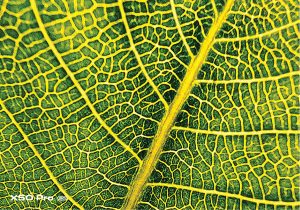 “I made about sixty macro images in about an hour, in my home garden and backyard. This is testament to how effective the Macro mode in the vivo X50 Pro really is.” -K Madhavan Pillai

In the Heart of the Action
The vivo X50 Pro’s gimbal technology proves its mettle in the Pro Sports mode of the phone. Madhavan and I had the opportunity to photograph Jayesh Dilip Rane, a professional football player, who is a midfielder for the ATK Mohun Bagan FC in the Indian Super League. Incredibly agile, Jayesh gave us plenty of moments to photograph. We decided to shoot him from a low angle to emphasise and dramatise his movements. It wasn’t a particularly sunny day, in fact, we photographed through a light drizzle. Despite this, the Pro Sports feature did an incredible job of capturing Jayesh’s interaction with the football. The gimbal stabilisation made sure that there was no shake even though Madhavan and I had to slightly reposition our phones as Jayesh moved around. Moreover, the Auto Zoom technology in the phone helps in the detection of a moving subject and keeps it in focus for motion capture, for clearer photos. 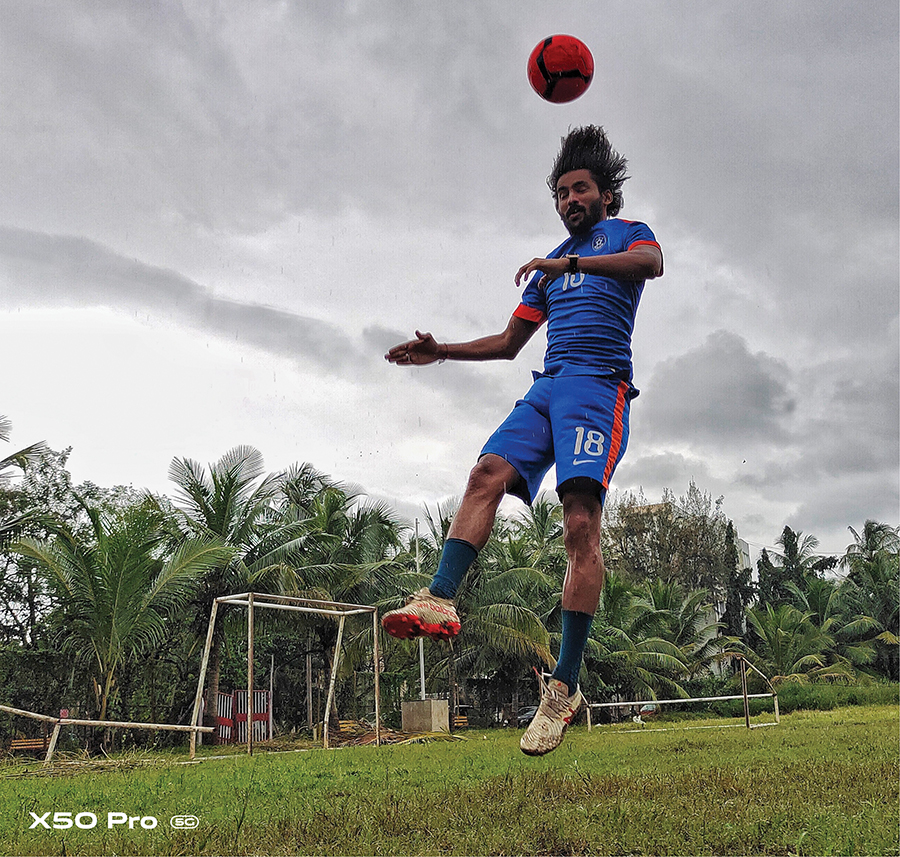 This image of Jayesh, mid-air, was photographed using the Pro Sports mode. The camera does an excellent job in maintaining focus even when the subject is on the move. Photograph by Conchita Fernandes

The vivo X50 Pro’s motion tracking autofocus is quite ingenious. It can track faces, eyes, human bodies… any subject that takes up the largest space in the frame. The Auto Zoom feature is another unique addition to the phone that is designed for subjects barring humans. By simply tapping on the subject, the camera recognises its profile and contour and continues to keep the subject in focus. The focus continues even when the subject moves out of the frame and returns, and is quite useful when making photographs of young children or pets.