During a blizzard, Brian Maffitt took advantage of the blinding snow to create something completely new.

Recently, the mighty snowstorm Nemo swept across northeast America. While most people were preparing themselves to brace the storm, I decided to photograph this phenomenon, but in a different way. Through some trial and error, I managed to create this series using my camera, an old projector and a children’s movie.

My Perspective
Many years ago I had experimented with a colour projector as a light source for a video. While it worked, the brightness of the projector was not enough to really light the subject properly, and there were artifacts that made the recordings unusable. Imagine pointing a camera at an old TV screen and you can conceive a version of what I was seeing.
I was preparing to shoot the blizzard with spotlights, when I remembered the projector trick and decided to try it again and see if I could add some colours to the snow. I assumed the low light sensitivity of the Canon EOS 7D would be able to capture some nice pictures. I was right. Capcha: As the wind increased and the snow blew faster, the trails turned into multicoloured ‘beads’ of light. These dots are produced by the individual frames from the video. Exposure: 1sec at f/6.3 (ISO 640). Photograph/Brian Maffitt

The Process
It was a spur-of-the-moment decision to use the projector after I was displeased with the results from the spotlight. A lucky moment of intuition.
I was looking to photograph long exposures of snowflakes that would capture the fractal motion of the snow. I also wanted to paint them with the light from a projector to create multicolour trails. So, I used an Optoma DLP projector and attached it to my Apple TV. To illuminate the falling snow with beautiful colour projections, I needed to find a movie that would be bursting with colours. Therefore, I chose to project the children’s movie The Lorax, into the snowstorm.
I set up my equipment in a darkened room and used the tree outside my window as the backdrop. This made sure that there was plenty of contrast between the snow and the background. I then began to project the movie on to the falling snow.
I shot freehand, using the Bulb mode, with the most successful exposures coming in at around one second. However, I needed to adjust the length of the shutterspeed to compensate for the speed of the falling snow and the amount of snowflakes in the frame.
After many adjustments for the ISO and aperture settings, I finally found a sweet spot that produced rich, clear, saturated photographs. The trickiest part of the evening was finding the right location that gave me good visibility of the snow while maintaining a dark background. Even at night, a snowstorm produces a large amount of ambient light, so pointing into the sky was useless. The nearby pine tree proved to be a very suitable backdrop.
I shot for a while and managed to make a final select of 16 images. After the shoot, I cropped some of the images and increased the contrast slightly to darken the background.
It helped that I was indoors… doing this outside would have been challenging for the equipment and my fingers.

My Equipment
For this series I used a Canon EOS 7D to shoot the snowstorm, an Optoma DLP projector and a movie playing off an attached Apple TV. RGB Threads: The frame captured something strangely familiar. This could just as easily be woven threads, or strands of DNA. Exposure: 1/10sec at f/6.3 (ISO 640). Photograph/Brian Maffitt

To see more of Brian Maffitt’s work you can visit www.flickr.com/photos/brianmaffitt

This article originally appeared in the January 2014 issue of Better Photography. 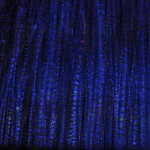 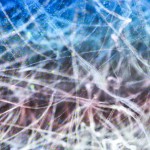 Woolly Threads: This is an example of what I set out to shoot that night—long, wispy colourful snow trails. Exposure: 2sec at f/6.3 (ISO 640). Photograph/Brian Maffitt