What Slithers in the Bushes… I shot this Common Cobra (naja naja) while a number of experts were handling it during a snake show. Do not attempt this if you do not have proper knowledge of snakes. Photograph/Alok Brahmbhatt

Most of us fear snakes. But for some others, they make beautiful subjects for photography. Keeping in mind the dangers, Alok Brahmbhatt sets out to photograph these stealthy creatures.

Description
To photograph commonly found snakes, in a way that they are easily identifiable when encountered.

Duration
Numerous trips in the wild, after the monsoons.

Notes
Snakes can be found in the wild, in the bushes, below stones, between blades of grass or even near your house. While shooting, be careful and maintain distance to avoid trouble.

What made me sympathetic towards snakes, was the unfortunate death of one during a trekking adventure. I began to observe snakes closely and I realised how beautiful they are! My respect for these creatures grew, as I continued to study more and more about them. Eventually I combined my curiosity for snakes and passion for photography—to share it with those who fear these beautiful creatures.

My Perspective
Before starting out on this assignment, I studied and gathered as much information as I could about snakes. Wherever and whenever I got the chance, I went to snake shows to help me learn more about their behaviour.

There are about 250 species of snakes in India—out of which about 50 are venomous and most of these are found in the sea. Only after my confidence increased and I could recognise a few common snakes, did I decide to shoot using my DSLR camera, normal and telephoto lenses.

The Process
Shooting snakes is actually as simple as shooting other wildlife subjects. The difficult part is locating them, going close and getting the right angle. When I was shooting, I tried to capture the shape of its mouth and scales, because they are important features, especially for identifying a species.

Once I found a snake, I first determined whether it was non-venomous or venomous. I am very particular about focusing. For instance, focusing on the eyes of the snake adds to the value of the photograph. In some situations, I managed to shoot their entire length, including the tail. These pictures received a lot of appreciation from those who wanted them for educational purposes.

While shooting deadly snakes like vipers, I tried not to stand directly in front of them. Whenever I needed to get my shot from the front, I always maintained a safe distance and used my telephoto lens. I also wanted to shoot snakes when they were eating. When they eat, they usually stay very, very still, which would have provided perfect opportunities for good snake portraits. But I was not that lucky.

It is very important to pursue this kind of photography in the presence and guidance of snake experts. In order to gain the confidence of these experts, you will have to prove that you are not there to harm the creatures, and that you are serious when it comes to learning about them. Sometimes, I also sought help from snake rescuers, who receive a number of calls to rescue snakes during the monsoons.

My Equipment: These images were shot over a period of time, so the equipment varied. I used the Canon EOS 350D camera with an 18-55mm f/4-5.6, Canon 90-300mm f/4-5.6 and Canon 200mm f/2.8L USM lenses. I prefer to use focal length between 150mm to 200mm, because it gives a better background blur and is also safer to shoot with. Shooting snakes with a wideangle is very risky, but the final results can be interesting.

Popular Venomous Snakes
To identify whether a snake is venomous or not, there is only one way—which is to know the species. Here are some of the common venomous snakes found in India:

Important Cautions to Keep in Mind

This article originally appeared in the September 2008 issue of Better Photography. 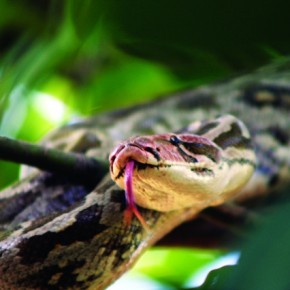 This Indian Rock Python (python molurus) was found near a forest adjoining my college. I followed it for a while, before I took this shot with a 300mm telephoto lens. Photograph/Alok Brahmbhatt 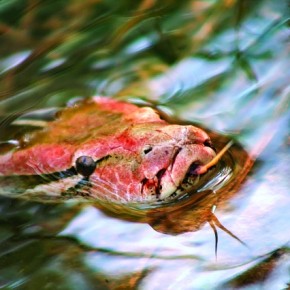 The Indian Rock Python (python molurus) slides into water if they sense prey there. I shot this one in a wildlife sanctuary with a 50mm lens. It lunged forward to attack me. Luckily, I escaped with a small bite. They are non-venomous. Photograph/Alok Brahmbhatt 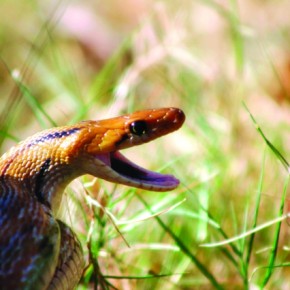 I shot this Common Trinket (elphe helena) when a snake rescuer went to release it in the wild. As soon as he released the snake, it gave us this aggressive look, which was unforgettable. Photograph/Alok Brahmbhatt 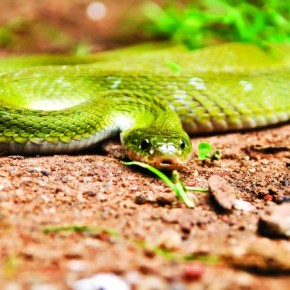 I found this Green Keelback (macropisthodon pulmbicolor) on the banks of a pond. This is a very calm and non-venomous snake, so it is quite easy to shoot. Photograph/Alok Brahmbhatt