A stick figure is shown climbing up the stairs. I like this image, because it depicts the structure of the human body and how people move around. Exposure: 44.2sec at f/14 (ISO 200). Photograph/Puneet Dembla

Puneet Dembla attempts to draw stick figures using a torch instead of a pencil.

Photography means drawing with light. If you take the term literally and paint with light, you will be amazed with the results! You do not need brushes or colours to light paint. All you need to do is use a light source as your paint brush and the scene in front of you as your canvas. You can use different coloured lights for variety, include real people in your images or simply light paint the scene. The possibilities in this fun, experimental technique are indeed, endless.

My Perspective
I came across the concept of light painting accidentally when I was toying with my camera. While experimenting with the Bulb mode in the dark, I noticed that the light coming from the battery charger registered as a streak of light. This amazed me and I went on to write my name with light, quite successfully too! Gradually, I tried writing more names and drawing faces. These experiments inspired me to light paint stick figures that perform certain actions in the long exposures.

The Process
I pre-visualise situations that involve action and which can be effectively depicted by stick-figure drawings like a tug of war, a person running, a couple of workers on the job and so on. The actions performed by the stick figures need to be striking as well as unusual.
Once I know what the frame will look like and the sort of action it will involve, I look for a background that will serve as the perfect canvas. Then, I simply practise drawing the stick figures for a while. Once I have perfected them, I bring in props and place them in the frame.
My tripod is set up at a considerably low height, and I use a wide-angle lens as I intend to shoot mid-length and close-up shots. I use an inexpensive tripod and I discovered that the tripod does not remain perfectly stationary for the length of the exposure. Also, if I am shooting extremely long exposures, I need someone to keep the shutter-release button pressed in the Bulb mode. So, I thought it sensible to invest in a wireless remote trigger to make crisp light paintings all by myself.
I divide the process of my light painting into two parts within a single long exposure. In the first half, I light paint the line drawings using an LED torch. In the second half, I use the torch to light the surrounding area and the background. This is to enhance the line drawings and to make them look dramatic. I avoid staying too long in once place with the light source facing the camera. This causes flaring and leads to overexposed images.
My post-processing only involves removal of noise (if any) and colour correction. I also correct the white balance of the images, if required. Since the postprocessing is minimal, it does not take me more than a day.
Each photograph that you see here is based on a lot of trial and error. Some required as many as 22 retakes. Light painting needs a lot of practice and you might need to reshoot a number of times. It is important to keep trying, as the perfect light painting can be elusive for only so long. Experiment as much as you can and have a lot of fun!

My Equipment: I shoot with a Nikon D40 and use an 18–55mm kit lens, a Simpex 333 tripod and a Nikon ML-L3 wireless remote. The light painting gear involved a powerful Eveready Digi-LED torch as it lasts longer than other, more common torches. You can achieve similar images using any camera that allows you to make long exposures. 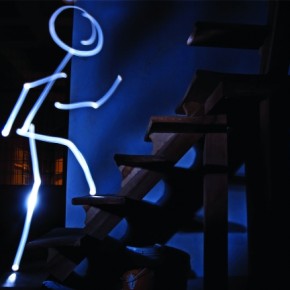 A stick figure is shown climbing up the stairs. I like this image, because it depicts the structure of the human body and how people move around. Exposure: 44.2sec at f/14 (ISO 200). Photograph/Puneet Dembla 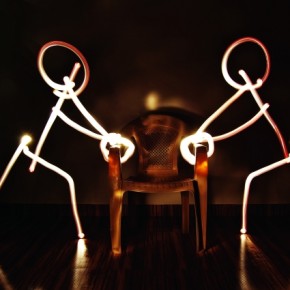 I felt that the actions of these stick figures were akin to those of our politicians’ struggle for power and is a tongue-in-cheek commentary on politics. Exposure: 53.6sec at f/5.6 (ISO 200). Photograph/Puneet Dembla 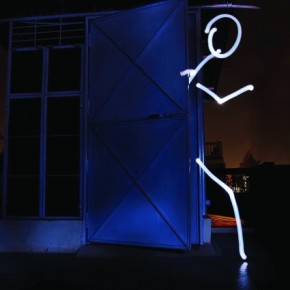 This image took three tries before I got it right. I made a stick figure that was as tall as the door to convey a sense of scale. Exposure: 56.5sec at f/16 (ISO 200). Photograph/Puneet Dembla 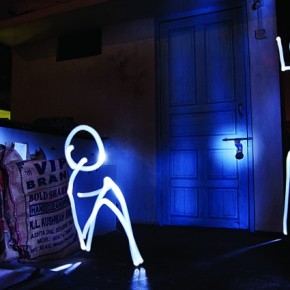 Here, I have sketched two workers resting at their workplace after a long, tiring day of work. Exposure: 79sec at f/14 (ISO 200). Photograph/Puneet Dembla 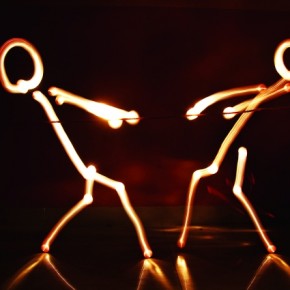 Creating this tug of war was the hardest. I was overjoyed to see that one stick figure turned out well, only to discover that the other looked skewed. Exposure: 80.6sec at f/9 (ISO 200). Photograph/Puneet Dembla