Mornings and evening sunlight throws long, exaggerated shadows. To make them seem darker and longer, let the shadow dominate the foreground and expose for the highlights.

Everywhere we go, shadows are constant companions. As photographers, we often fail to notice their form and beauty. Shobhan describes 20 easy ways to capture shadows.

The very meaning of the word ‘photography’ is drawing with light. In some places around the world, photography is also depicted as the recording of shadows. In Hindi, photography is called ‘chhaya-chitra-kala’, or the art of creating pictures using shadows. Renaissance painters from Italy coined the term ‘chiaroscuro’ for the use of contrasts in shade and light to create mood. Indeed, shadows are just as much a part of a photograph as highlights and they can be used to make stunning photographs.

Observation is the key to capturing shadows well. They can vary greatly depending on the time of the day and change according to the position and type of light. Here are some great ideas to get you started.

1. Shoot Only the Shadow
It is common to include shadows with the main subject. But to deviate from the ordinary you must explore other idea. Shooting only the shadow, without any other element within your frame, can make your photograph look mysterious or like a work of fine art.

2. Let the Shadow make a Frame
When you shoot through a window to capture a bright scene outside, you could create a frame with the shaded window. In brightly lit conditions, this shadowy frame can be rendered almost black by exposing the scene for the brightly lit subject outside.

3. Subject and Shadow Interaction
When you include both the subject and its shadow in the frame, you need to think of an interesting way to capture both. For instance, you can use your subject’s shadow to creatively fill up space within your frame.

4. Adding Someone Else’s Shadow
Capture the shadow of person along with somebody else or some other object in your composition. Though the shadow and the object will seem disjointed, this adds an interaction between the unseen and the visible object within the frame. This usually gives a strange feeling to the picture.

5. Shoot Shadow Self-portraits
Have you taken the time to notice your own shadow on the ground? Observe what happens to your shadow as you walk past street lights at night. Very often we miss the most usual and regular visuals, just because we are always looking for something out of the ordinary. Pay attention to your shadow at different times of the day (and night) and freeze the frame for a self-portrait! This is, perhaps, the easiest way to explore and capture shadows, as it is with you all the time!

6. Using Shadows for Low-key Shots
A low key image is where the darker tones dominate the photograph with small areas of highlight. For this type of photography, position yourself against the light such that the light source is either behind the subject or slightly off to one side. Let the shadows be a large part of your frame. You also need to underexpose the image to make the tones deeper. If you are shooting outdoors, set your exposure compensation to underexpose by half a stop to one stop. This will saturate the colours of the sky and will render the shadows almost black.

7. Emphasise Colours with Shadows
Strong shadows on a coloured surface can add contrast, making the colours automatically seem more rich and vibrant. Shadows also serve to enhance the shape and form of your subjects. Generally, there is three to four stops of exposure difference between a strong shadow and a well-lit brightly coloured surface. Thus, when you saturate colours by underexposing by about one-third or half a stop, the shadows on that surface will become almost black.

8. Adding Depth to your Image
Long streaks of shadows and light moving from the foreground to the background add a sense of depth and distance within an image. In these types of compositions, it is usually better to have shadows move obliquely across the frame rather than parallel to the edges. These types of elongated shadows are frequently found in morning or evening light.

9. Different Times of the Day
Observe the nature of shadows thrown by light at different times of the day. They will be of different sizes and lengths. When the sun is lower in the sky during mornings and evening (just after sunrise and before sunset) the shadows formed will be oblique and longer whereas shadows formed during noon time will be directly overhead and very short. This also depends on the sun’s position with relation to the subject. So choose a time according to the kind of effect you want to create.

10. Celebrate the Unseen
Shadows can be looked upon as patterns and shapes. When you frame your composition independent of the object creating the shadows, you can enhance the feeling of mystery if you concentrate on capturing the shadow as an interesting shape. The viewer will remain curious as to how the shadow was created.

11. Change Your Perspective
A different vantage point from the usual eye-level perspective always catches attention. Sometimes moving your subject is just not possible—but when you move around it, the impact can be completely different. This might mean shooting from directly above or from the sides. By doing this, you are also moving away from the norm and making your shot look completely different from the rest.

12. Shoot Shadows from a Height
Shooting shadows from a height gives the photograph a sense of distance and space. It also allows you to include more than one thing in the frame along with the shadows. Shooting from a height makes your image seem flat, abstract and sometimes surreal.

13. Create a Shadow Collage
Mount your camera on a tripod and fix its position so that it does not move for a day. Try shooting the shadows and patterns formed by an object at different times of the day from exactly the same spot. Later, merge the images together using photo-editing software and create a collage for an interesting effect. You could also try similar effects by experimenting with your camera’s multiple exposure settings or by simply combining different images together.

14. Focus on Patterns and Textures
Patterns are all around us, in both nature and our surrounding. Likewise, shadows too show patterns. Photographs of shadow patterns can make intriguing images. Textures are quite different from patterns. It is easier to capture a textured surface when light hits the surface obliquely, forming shadows and adding depth to a texture. Without shadows, textures would look flat. A strong shadow of a recognisable object falling on a texture makes it all the more interesting.

16. Blur Shadows with Long Exposures
Have you tried shooting waterfalls with long exposures? While the water blurs into a mist-like form, the surrounding rocks are perfectly sharp. Likewise, as the branches and leaves of trees catch the breeze, the shadows also move. A long exposure in this situation renders a soft tonality to the light and shade effect, while keeping any stationary objects in the frame perfectly sharp. You will need use a tripod, a low ISO setting and the smallest aperture affordable by your lens to get a long enough shutterspeed, especially in bright sunlight.

17. Shoot Out-of-focus Shadows
Break away from the norm of keeping everything in focus and blur out the shadows completely by using the manual focus option of your camera. You can selectively blur out a portion of the frame by controlling your depth-offield and carefully selecting your point of focus within the frame. For example, you can choose to keep the shadows in the foreground sharp and progressively blur the shadows in the background. Shooting an out of focus shadow lends a deeper sense of mystery to your photographs.

18. Shoot High Contrast Images
Contrast lends shape, form and strength in an image. A high contrast images is one where the dark and bright tones dominate over the middle tones. So look for dark shadows on brightly lit surfaces. High contrast pictures also look good in black and white. It is best to shoot in RAW in these situations. You can edit the image to your satisfaction later on.

19. Control Shadows with Reflectors
Reflectors are useful for portraits with a lot of shadow detail. Patches of shadow on the face can be evened out by using a small, portable reflector to fill in the darker areas. Reflectors also prove useful in other shadow photography situations, especially when you want a small part of your frame highlighted in low-key shots.

20. Shadows at Night
When the sun goes down, shadows deepen, become more dramatic and take on a life of their own. Shadows thrown by street lamps and moonlight will require longer exposures. So do not forget your tripod. For many of you who would like to explore the world of shadows, this may become your favourite time to shoot.

Minimise Shadows When They Are Not Wanted

This article originally appeared in the May 2010 issue of Better Photography. 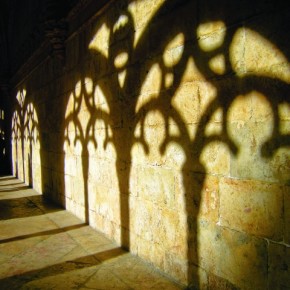 Arches, corridors and grills make great subjects for shadows. If the building is close by, it is worthwhile to keep visiting it through the year. Shadows change depending on the relative position of the sun. 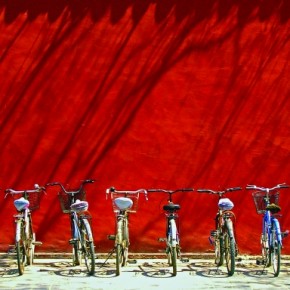 Shadows often add character to blank, negative spaces within a frame, improving the overall appeal of a photograph. 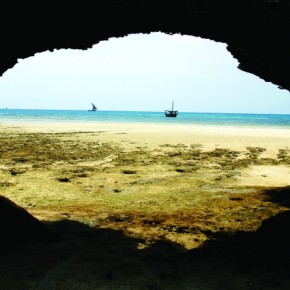 Using a foreground shadow to frame a scene makes the picture look more attractive. Almost any structure, through which you can view your subject, can be used to create a frame. 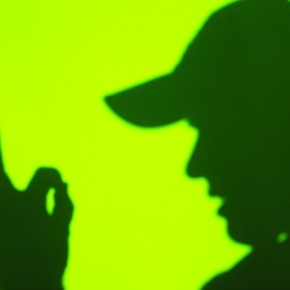 Sharp shadows are formed by small, bright light sources, like the sun. They can be used to create some very interesting self portraits against a plain, colourful background. 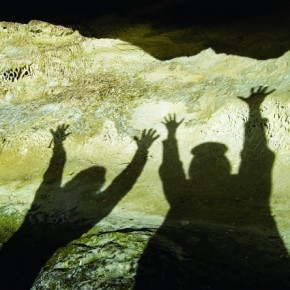 Shooting shadows can be a lot of fun, especially with friends. For this type of shot, you will have to mount the camera on a tripod. This will prevent its shadow from appearing in the frame as well. 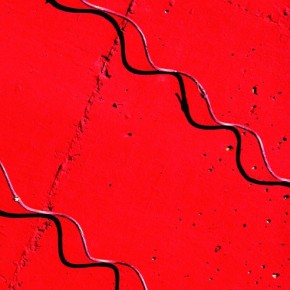 With shadows, the most striking compositions are usually very simple. Whe you shoot frames like these, the shadow must add graphic value to the overall image. 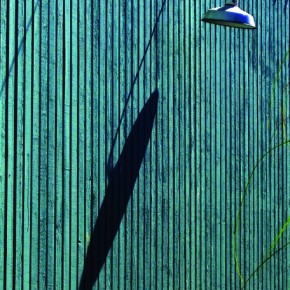 Midday sunlight can be harsh and unappealing for many shooting situations. But it is perfect for shadows and textures on walls. 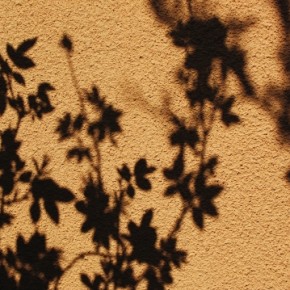 Even the delicate patterns created by the shadow of a tree on a wall can be appealing. Combine this with a good background texture or colour for effect. 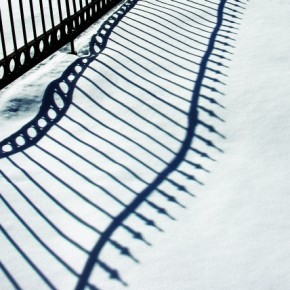 Shadows are affected by the characteristics of the place they fall on. If the ground is uneven, a straight shadow becomes wavy too. This can be used to make a picture more engaging. 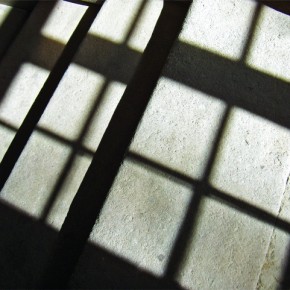 Shadows can form almost anywhere in the most fascinating ways. A single stairway can present you with dozens of great shots. 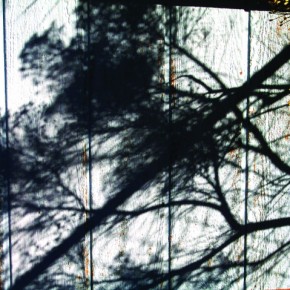 Including a bit of the tree in the frame with its shadow, especially if it has good colours and form, makes the image all the more attractive.