I have tried to look at the changes in my personal space as a transition from a bachelor’s life to the life of a family man. Photograph/Deepak John Mathew

Deepak John Mathew’s series explores his own personal space and how it is slowly being scribbled over by his children.

This series is titled Missing Interiors and it started as an accidental picture. Then I made a conscious decision to continue shooting for it over the years. I documented any change that took place in my house.

My Perspective
I was actually shooting something else, when I saw some scribbles made on the wall by my daughter. This led me to start a project about losing one’s personal space.
What my daughter did, is the exact same thing that we do with the borders of countries as well. We just declare that certain territory belongs to us. And we fight for it, though any place on the entire planet does not belong to anybody. Each inch of my house has been reinscribed by the children’s presence. Photograph/Deepak John Mathew

The Process
This is a personal project that requires a lot of time. I do not simulate the situation, everything has to happen naturally, and hence the long wait.
Since I live in the same space, the one problem that comes up is that I get used to seeing the same things on a daily basis. Sometimes, creating a new frame becomes impossible. But then, the drawings on the wall change almost every day. So, deciding when exactly to shoot becomes a problem.
Each incident and situation forms a special place in my heart. I remember, once I had gone to my room, and I found a sign that said, “Do not enter… Aastha’s room,” and that triggered the idea of territories. It was the same room that I used to consider my own as all my equipment is kept there!
Though I shoot the pictures at home, I am consciously looking for symbols. Many a times, the elements in the photographs work as metaphors. At other times, I chose the frames in such a way that there is some element of fun in the photograph. For me, this means that there should be some contrast in the way the elements in the frame interact with each other.
I shoot using a grey card, and correct the White Balance on the computer. I shoot in My children place their books, toys and other things where I used to keep my books and equipment. RAW and process the files for sharpness and contrast in Phocus and Photoshop. Since my frames are well calculated, extensive postprocessing is never a requirement.
Normally, I don’t even crop my frames. I make the decision to shoot whenever I see disorder and chaos. So, the images are composed quite consciously

My Equipment
I used a Hasselblad with 28mm and 80mm lenses for most of the pictures. I also used a Nikon D3x with 50mm and 24mm lenses. Since I use available light, some of these exposures last several seconds. Through this series, I have moved from the mundane and the generic to the larger implications of invasion and displacement. Photograph/Deepak John Mathew

Tips on Creating a Series of Photos at Home

To view more of Mathew’s work, you can visit www.djmphotography.in

This article originally appeared in the June 2013 issue of Better Photography. 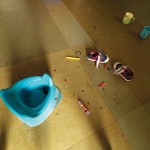 I do not know when my children started, but now that they are here, they have completely occupied all spaces. Photograph/Deepak John Mathew 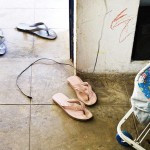 My children place their books, toys and other things where I used to keep my books and equipment. Photograph/Deepak John Mathew