The series portrays an objective perspective of the people that inhabit these spaces. Photograph/Menno Aden

Through a simple idea and an aerial perspective, Menno Aden captures portraits of the spaces that people occupy.

The series was born when I did a ‘photo diary’ of the food I ate as a kid. I would take pictures of the meals that I was eating by standing on a chair and shooting downwards. Essentially, I chose a perspective that was almost like that of a surveillance camera. Soon, I realised that the cups, plates and other cutlery combined with the food to form an unusual, abstract view of the table. I fell in love with this view from above and started moving my chair around and including the entire room in the image. The final image is like a flattened two dimensional model of the rooms, highlighting the geometry of the place. Photograph/Menno Aden

My Perspective
As an artist, I am greatly interested in the relationship between human beings and technology. I am also fascinated by the ways in which we are influenced by the architecture and industrial design that surrounds us.

I was impressed by the works of David Hockney where he arranged many pictures of one scene into a photo mosaic. The visual style of senior photographers like Andreas Gursky and Robbert Flick also impressed me.

The images are shot in such a way that there is no particular emphasis on any single subject. It avoids restricting the attention of the viewer. This was very important as I wanted to ensure that various elements within the frame got equal attention. By using a vantage point from the centre of the ceiling, I help the viewer inspect every object and movement in the frame. Photograph/Menno Aden

The Process
Choosing a room to photograph often depends on the feel of the room—the design, the colour of the walls, the floor material and the furniture. I look for grids, symmetries, micro and macro structures within the room and the order and disorder within the scene. It is only then that I pay attention to how the room has been lit. Usually, the light is enough to let me shoot using a narrow aperture for maximum depth.

When a room interests me, I start planning how I will be shooting it. I make multiple images of the room and stitch them together for the final portrait. Since I vary the angles, each image is prone to distortion. This is why I end up using only a small portion of each photo. Eventually, I merge and overlap multiple images while postprocessing the final picture. I follow an invisible grid and make around 100–150 pictures of different areas of the room. A boom stand or a monopod helps me shoot from multiple places. One room portrait takes anything between a week to a month to finish.

My images are artworks as well as documentary photographs of people’s lifestyles. Someday, I hope that these views of homes and public places will open up new dimensions and offer an insight into designs and lifestyles of the past. The lack of human occupants often makes it hard to gauge the size and scale of these spaces. Photograph/Menno Aden

My Equipment
I used a DSLR along with 24mm, 35mm and 50mm lenses. I also used a shutter release cable for remote shooting. Besides these, monopods, tripods and boom stands also helped me.

How to Make Your Own Room Portraits

To see more images from this series, visit www.mennoaden.com/room_portraits.html 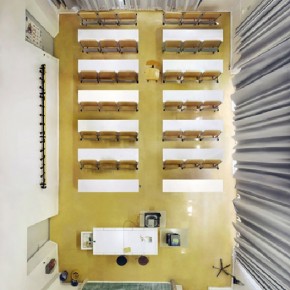 My images are all about changing the way we see the spaces and places we inhabit daily. Photograph/Menno Aden 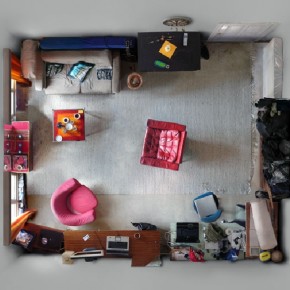 I use tight crops that highlight the inherent voyeuristic nature of mankind. Photograph/Menno Aden