To symbolise the Russian victory over Germany in WW II, the photographer made soldiers recreate the iconic image of US soldiers raising the flag at Iwo Jima, Japan. Photograph/Yevgeny Khaldei. Image Source: www.wikipedia.org

Aditya Nair studies images that symbolised wars and revolutions in an attempt to understand what makes them iconic.

The image of Jamyang Yeshi, a Tibetan youth running ablaze, haunted the Indian news media in March, this year. Yeshi immolated himself during a protest against the India visit of Chinese President Hu Jintao. The image brings to mind another image of Buddhist monk Thích Quang Đuc, who set himself on fire in Saigon, Vietnam, in protest of the oppressive policies of the Catholic regime at the time. Have you ever wondered what makes these photographs indelible? How do they achieve their iconic status? Why are they so difficult to forget?

Portraying Defining Moments
On 14 August 1947, Jawaharlal Nehru stood before a free India to give his first speech as the Prime Minister. The photograph of Nehru holding the Indian flag became the defining moment of India’s struggle.

Giving Us Our Heroes
Amongst the most popular photographs ever made is a portrait of Che Guevara by Alberto Korda. The image, titled Guerrillero Heroico, shows a sombre Che at a memorial service for victims of an explosion. The image attained iconic status, almost ten years later, when Irish artist Jim Fitzpatrick started circulating stylised posters of Korda’s image to protest Guevara’s death.

Recreating History
Images have often been made solely with the purpose of being symbols. In 1955, Rosa Parks, who later became the first lady of the American Civil Rights Movement,was ordered to give up her bus seat for white passengers. She was then arrested for refusing.
A year later, as a result of her protest, the US Supreme Court found the segregation of seats on buses in Montgomery to be illegal. The following day, United Press International (UPI) staged a photo op of Parks sitting in front of a white man. The purpose was to capture an image that would dramatise the movement.

Going Viral
Before social media evolved, however, the fame of an image still depended on how widely it was used. Jeff Widener of the Associated Press (AP), Charlie Cole from the Newsweek and Magnum photographer Stuart Franklin, each made nearly identical frames of what is now popularly referred to as Tank Man. The images show a rebel standing in front of a row of tanks in protest, after the Chinese army forcibly removed protestors from Tiananmen Square, Beijing.
Today, the most popular version is the one shot by Widener. He managed to get the image to the AP wires, thus making the front page of most European newspapers. Similarly, the 2011 uprising in Egypt saw the image of a rebel, with his protest banner raised, facing a line of armed guards. The act, reminiscent of Tank Man, was uploaded by an amateur photographer to the popular social news website, Reddit. Overnight, his image became the next day’s headline.

The Imitations
Most interestingly, photographers have tried to recreate iconic images to symbolise other events. A photograph titled, Raising the Flag on Iwo Jima, shows US armed forces raising their flag at Mount Suribachi, Japan during the World War II. The iconic nature of this image has sparked quite a few spin offs as well.
More recently, Thomas Franklin photographed three firefighters on 11 September 2001. It shows them raising the American flag amongst the rubble of the fallen Twin Towers in New York, USA.
It is unfortunate that such images are created as a result of horrific events. Wars and revolutions are the setting for their creation. Years after these events lay forgotten, they are recalled through the images that came to symbolise them.

I Have a Dream: This image shows Dr Martin Luther King Jr’s iconic speech ‘I Have a Dream’. Addressing over 2 lakh supporters, King called for an end to racial discrimination. The address is considered to be among the greatest speeches ever given and became the hallmark moment for the American Civil Rights Movement. Image Source: www.kingsacademy.com 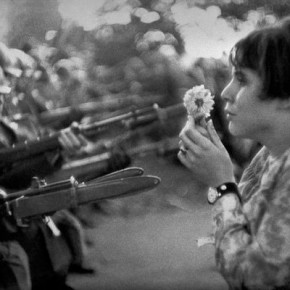 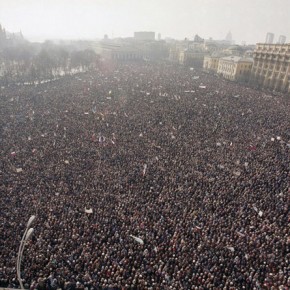 Fall of the Soviet Union: This image, made on 10 March 1991, shows a massive crowd of over 5 lakh protestors at Manezh Square. This ultimately resulted in the fall of the Soviet Union. More recently, the image began spreading via social networking sites as a protest against the rule of Prime Minister Vladimir Putin in February 2012. Photograph/Vitaly Armand. Image Source: www.imgur.com