Quote of the Week Ouka Leele 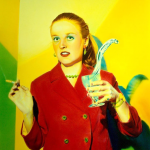 Barbara Allende Gil de Biedma, better known by her artist name Ouka Leele was a prominent Spanish photographer. Even though she wanted to be a painter, she discovered photography as a medium to express her natural and intensive artistic sensitivity. It is in the 1980s in Madrid during the nation’s ‘Movida’ movement when she demonstrated her interest in a variety of artistic disciplines such as drawing, serigraphy, painting and literature resulting in a series of photos labelled as ‘icons of her time’. In her photography, one recognises the references to ancient civilisations, mythological stories, literature and intimate worlds of family and friends placed in different settings including portraits and self-portraits. She was also best known for painting her black and white prints with watercolours, akin to the practice of painted prints of the late 19th and early 20th century (in Japan particularly). She was awarded the 2004 Culture Prize by the Community of Madrid and the 2005 National Photography Award and her works can be found in a number of collections including Collection Arco (Madrid), Foundation Cartier (Paris), Foundation La Caixa (Barcelona), Cervantes Institute (Lisbon), Museo Nacional Centro de Arte Reina Sofia (Madrid), Tabaco Gitanes (Paris).