Quote of the Week by Wim Wenders 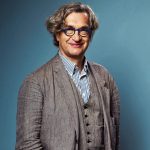 “Every photo, every ‘once’ in time is also the beginning of a story ‘once upon a time’. Every photo is the first frame of a movie.” —Wim Wenders (1945)

Wim Wenders is a German artist best known for his films Paris, Texas (1984) and Wings of Desire (1987). Wenders is also a prolific photographer, with many of his images coming from his travels and location-scouting for films. Born Ernst Wilhelm Wenders in Düsseldorf, Germany, he first became interested in film while studying painting and engraving with Johnny Friedlaender in Paris. Unable to get into a film school in France, he moved back to Germany and enrolled at the Hochschule für Fernsehen und Film in Munich during the late 1960s. Between 1986 and 1992, his show, “Written in the West,” toured throughout Europe and Miami. In addition to his narrative films, Wenders has had success in documentary filmmaking, with films such as Buena Vista Social Club (1999). He currently lives and works between Los Angeles, CA and Berlin, Germany. Today, his works are held in the collections of the J. Paul Getty Museum in Los Angeles, the Jewish Museum in New York, and the Modern Art Museum of Fort Worth, among others.