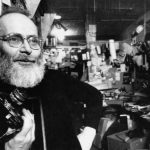 “Photography is a small voice, at best, but sometimes one photograph, or a group of them, can lure our sense of awareness.” —W Eugene Smith (1918-1978)