Quote of the Week by Seydou Keïta 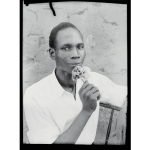 “It’s easy to take a photo, but what really made a difference was that I always knew how to find the right position, and I never was wrong. Their head slightly turned, a serious face, the position of the hands… I was capable of making someone look really good. The photos were always very good. That’s why I always say that it’s a real art.” —Seydou Keïta (1921-2001)

Seydou Keïta was a Malian photographer known for his black-and-white portraits of friends, family, and neighbors. Running a commercial portrait studio, the artist captured many idiosyncratic details of time and place, including the traditional patterned dresses of his female sitters. Born in Bamako, Mali, he worked as a carpenter with his father as a young man. Keïta first began taking photographs after receiving a Kodak Brownie camera as a gift from his uncle. By 1949, he had established a studio in a small courtyard nearby one of Bamako’s prisons. After having much of his equipment stolen over during the 1970s, the artist shuttered his studio space in 1977. In 1992, two French photographers Bernard Descamps and Françoise Huguier, traveled to Mali in search of Keïta, having seen his work in a recent show at the New Museum of Contemporary Art in New York. The Frenchmen and their gallerist subsequently introduced Keïta’s work to an international audience, leading to opportunities that included a photo campaign for Harper’s Bazaar during the mid-1990s. The artist died on November 22, 2001 in Paris, France. Today, his works are held in the collections of the Solomon R. Guggenheim Museum in New York, the Fotomuseum Winterthur in Switzerland, and the Hammer Museum in Los Angeles, among others.