Quote of the Week by Lynsey Addario 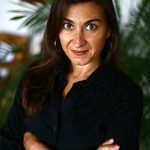 “He taught me to stand on a street corner or in a room for an hour—or two or three—waiting for that great epiphany of a moment, the wondrous combination of subject, light, and composition. And something else: the inexplicable magic that made the image dive right into your heart.” ―Lynsey Addario (1973)

Lynsey Addario is an American photojournalist who regularly works for The New York Times, National Geographic, and Time Magazine. Lynsey began photographing professionally for the Buenos Aires Herald in Argentina in1996 with no previous photographic training. In the late 1990s, she began freelancing in New York City for the Associated Press, where she worked consistently for three years before moving to New Delhi, India, to cover South Asia for the Chrstian Science Monitor, The Boston Globe, and Houston Chronicle. In 2000, Addario first traveled to Afghanistan to document life and oppression of women living under the Taliban, and made three separate trips to the country under Taliban rule before September 11, 2001. Over the past 15 years, Addario has covered every major conflict and humanitarian crises of her generation, including Afghanistan, Iraq, Darfur, Libya, Syria, Lebanon, South Sudan, Somalia, and Congo.  Addario has been the recipient of numerous international awards, including MacArthur Fellowship, Pulitzer Prize for International Reporting, and the Excellence in International Reporting Award amongst others.