Quote of the Week by John Berger

“All photographs are there to remind us of what we forget. In this -as in other ways- they are the opposite of paintings. Paintings record what the painter remembers. Because each one of us forgets different things, a photo more than a painting may change its meaning according to who is looking at it.” —John Berger (1926-2017) 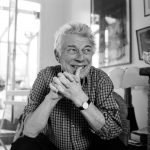 John Peter Berger was an English art critic, novelist, painter and poet. He started his career as a painter, and went on to become an acclaimed art critic. In 1972, he received the Man Booker Prize for his novel G., amongst various other prestigious awards. His deeply rooted political convictions are often considered undertones to some of his books. Understanding a Photograph is a compilation of his essays that probes into the works of Henri Cartier- Bresson, W Eugene Smith and other iconic photographers, and his images provide readers with a humanitarian and political perspective of the same.