Quote of the Week by Duane Michals 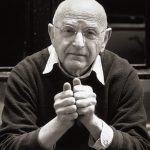 Duane Michals is an American photographer who creates narratives within a series of images. Blending images with text in a format similar to cinematic sequences, his hallmark process is evinced in a group of 9 photographs titled Things are Queer (1972). Born in McKeesport, PA, Michals received his BA from the University of Denver in 1953 before working as a photojournalist. Over the course of his career, he has taken portraits of influential artists such as Andy Warhol, René Magritte, and Marcel Duchamp, often marking his prints with poetic writings and observations about his subject. His first solo exhibition was held at The Museum of Modern Art in New York, in 1970, and Michals celebrated 50 years working as a photographer in 2008 with a retrospective at the Thessaloniki Museum of Photography in Greece and the Scavi Scaligeri in Italy. His works are included in the collections of the Art Institute of Chicago, The Museum of Modern Art in New York, and the Carnegie Museum of Art in Pittsburgh, among others.