Quote of the Week by Deborah Copaken

“When you learn to properly frame an image in the viewfinder of a camera, you start to frame and catalogue everything you see, whether you photograph it or not. And suddenly, memory has the shape of a rectangle. The vastness of a forest becomes twelve trees with a rock balancing out the foreground. A person becomes a close-up of the crow’s feet around his eyes. A war becomes red blood in white snow. Sometimes I feel like my brain has become nothing more than an overstuffed spiral notebook full of negatives, printed at will in a disorganized flurry by the slightest provocation.” —Deborah Copaken (1966) 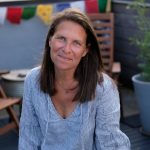 Deborah Copaken is the New York Times bestselling author of several books, including Shutterbabe, The Red Book, and Between Here and April, among others. A contributing writer at The Atlantic, she was also a TV writer on Emily in Paris, a performer (The Moth, etc.), and an Emmy Award–winning news producer and photojournalist. From 1988 to 1992, she worked as a war photographer, parachuting from conflict to conflict (Afghanistan, Israel, Romania, Zimbabwe, the USSR, etc.) Her photographs have appeared in Time, Newsweek, The New York Times, Géo, and Stern, amongst others. Her writing has appeared in The New Yorker, The New York Times, The Guardian, The Financial Times, Observer, The Wall Street Journal, The Nation, Slate, O, the Oprah Magazine, and Paris Match, among others. Her column “When Cupid Is a Prying Journalist” was adapted for the Modern Love streaming series. Her seventh book, Ladyparts, a memoir of bodily destruction and resurrection during marital rupture, was just published by Random House.