Quote of the Week by Andreas Feininger 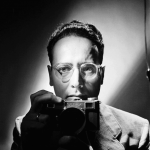 “It’s nothing but a matter of seeing, thinking, and interest. That’s what makes a good photograph. And then rejecting anything that would be bad for the picture. The wrong light, the wrong background, time and so on. Just don’t do it, not matter how beautiful the subject is.”—Andreas Feininger (1906-1999)

Andreas Feininger was a French-born American photographer known for his wide range of subject matter. In his photo Route 66, Arizona (1947), which was taken for LIFE magazine, Feininger visually conveyed the legend of the road’s infinite length. “What matters is not what you photograph, but why and how you photograph it,” he once explained. His father was the American-German painter Lyonel Feininger. He went on to study at the Weimar Bauhaus during the 1920s. Though he mainly studied architecture, Feininger developed an interest in photography after taking courses with a Bauhaus professor and friend of his father’s László Moholy-Nagy. In 1936, he abandoned his architecture studies, relocating to New York shortly before the advent of World War II. He began working for LIFE in 1943, where, over the next two decades, he completed 346 assignments. Feininger’s great love for New York, is seen in his numerous black-and-white photos from vantage points all over the city. Today, his works are held in the collections of the George Eastman Museum in Rochester, NY, The Museum of Modern Art in New York, and the Smithsonian American Art Museum in Washington, D.C., among others.