Natasha Desai shows you how to create mind boggling photographs that you can have fun with! Make sure that your subject’s head touches the surface of the water. Shoot and rotate the image for a surreal underwater portrait. Photograph/Natasha Desai

Ever thought of shooting a person walking on water? Or your favourite action figure floating in the air? Creating such images is simpler than it appears. No expensive gear, complicated techniques or extensive editing needed. All you have to do is position your subject in a certain way and rotate the image. With a little out-of-the-box thinking, you can leave people wondering how you did that!

Make Surreal Underwater Portraits
With the correct waterproof casing you can shoot beautiful, almost bizarre portraits. Have your subject go underwater fully clothed and stand perfectly still with only their head out of the water, and shoot. Another thing you can do is have them go entirely underwater and float up to the surface a little bit. Since your subject is wearing day-to-day clothes, this sort of a surreal image will confuse the viewer.

Climb Your Wall Like Spiderman
Here is your chance to shoot someone pulling off a gravity-defying stunt. Find an empty corner of a room and place a painting or picture frame on the floor. Have your subject stand beside it and pretend to walk. Shoot a vertical image and rotate it to make the floor look like the wall. Convince your friends to lie on the ground as you photograph them doing regular activities. The structures in the background will confuse your viewer. Photograph/Natasha Desai

Make it Float Up
You can easily make any object look like it is floating up to the ceiling. Ask someone to hold a string tied to an object, so that it is hanging upside down. Shoot to include the hand at the top of the frame. Rotate the image to make it look as though it is floating up like a helium balloon. Find an interesting vantage point of a water body. Shoot a reflection and rotate to make the water seem like the sky! Photograph/Christiaan Tiebaart

The Crazy House
Fool people into thinking you live in an area that is straight out of a German Impressionist film! Find a slope in your area and shoot with a building or house in the background. Make sure you compose the photograph in a way that there is enough room to crop without affecting the structure. In a software like Photoshop, use the Straighten Tool and align the ruler to the slope so that it becomes a horizontal line. Your image will instantly transform into a crazy town with the building jutting out at an odd angle. Have a person leaning backwards in your frame to add to the illusion. Shoot a slope and straighten it to a perfect horizontal line. Make the building look like it is jutting out weirdly! Photograph/Kevin Mao

The Stairwell Trap
Ask someone to stand with the camera on the steps behind and above your head. Lie down or sit at the corner of the stairs. Again, shoot and rotate! Ask someone to photograph you from above and behind your head as you lie on the corner of the staircase. Photograph/Andrew Cabamalan

Play The Daredevil
Being a daredevil is safe and east too! All you need is a balcony. Ask a friend to sit at the edge of the balcony and put their legs through the bars of the grill. Hold your camera carefully above their feet, shoot and rotate the image. Be very careful to have the strap around your wrist or neck lest you drop your camera. Ensure the balcony you are using has a sturdy grill. Shooting a friend’s feet through the grills of the balcony will create the illusion of a death defying stunt, without putting anyone in danger. Photograph/Natasha Desai

Scale Walls like Batman
The classic TV series Batman had an iconic scene where the masked superhero and his sidekick both climbed walls with ropes. Replicating this is easier than you think. Choose a space with a relatively plain background. Ask your subject to hold a rope at waist length. Tie the other end of the rope or have another person hold it. Have your subject grab hold of the rope and stand like they are in a tug-ofwar match. Shoot with the camera at the shoulder level of your subject. Be careful to not include the other person. Rotate the image and your subject is on their way up a wall without even breaking a sweat! A simple doorway is all you need to look like you are falling down an abyss of doors. Photograph/Sinuhe Jakousi Bravo Enriquez

Make your World Topsy Turvy!
What if your head was where your feet should be? All you need are willing friends and an interesting space with a wall. Include cars or trees and add to the deception. Ask your subject to lie down on the ground with their feet propped against the wall, as though they were sitting or standing with the wall as the ground. You will baffle everyone with a picture where the world behind is leaning to the side! Your imagination is the strongest tool you have to leave your viewers astonished. Push the boundaries see how far you can go with your imagination! 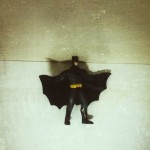 Make it Fly!: Place your object upside down against a plain background and floor. Shoot with your camera upside down and roatate the image. Photograph/Natasha Desai 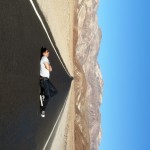 The Wonder on Road: When on the road, find one with stripes down the centre or sides and a picturesque background. Try rotating the camera or the image for a crazy feel. Photograph/Akshay Samarth 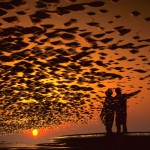 Astound With Reflections: Try shooting a person partially in any reflective surface for variation. It could be a glass table, a puddle or a TV screen and then simply rotate. Photograph/Rajesh Dhar