I used wood to create a connect in this image. It forms the background in both images in this diptych. Photograph/Jason Travis

Jason Travis sets out to capture the essentials that people carry daily and discovers how it portrays their unique identities.

People have always inspired me and my work, especially their individuality and distinct identity. Each day is new for people around the city. And with so many variegated personalities, one is bound to find endless fascinating subjects to photograph.

My Perspective
I have always been fascinated with why people tend to carry their whole world in their handbags. Traditionally, when people set out of their homes and head to their workplace, they always carry a bag with them. They carry what they deem to be the most essential needs—things not just for work but also for personal reasons. This, I believe, defines them to a large extent. Without intending to pry, I aim photograph every single item in my subject’s bag.
For me, creating diptychs of people and their belongings results in interesting portraits. My necessity to capture a portion of their lives in such detail adds more meaning to their portraits. In doing this project, I discovered that certain interesting similarities in what different people carry around can produce intriguing communal semblances. I have also come to realise the beauty of being the voyeur in identifying the various tokens people carry with them and their personalities. It allowed me to discover what ordinary objects mean to different people.

The Process
To begin with, I looked for people who I was already friends with. It meant that I would be able to capture their possessions with relative ease. I made sure they were comfortable as that would help me in understanding the relationship with the things they carried. I normally start by shooting a portrait of the person and only then begin to empty their bag. My subjects should be at ease so that their personality can show through the picture and ‘who they are’ can be understood. Eventually, that translates through the photograph of their belongings in their bag. I lug around a portable table and a white sheet on which I place the items from people’s bags. I do this to understand each object and how it can connect to the person and even to the rest of the things in the bag. After shuffling the articles around to find the most suitable placements, I finally arrange them in the way I would be shooting the scene. In some cases, achieving a symmetrical balance in the way I place the objects results in a well-composed picture. Sometimes, I also experiment with different patterns to break the monotony and create an interesting layout.
I then scout around for the most interesting background to showcase the objects on. It should not only complement the things but also speak about the person in its own subtle way. The background matters in terms of choosing the right perspective and colours. I have tried to remain consistent and yet I have continued to experiment with small factors. For me, trying different things is important because the best ideas can come on ordinary days and turn things around.
While shooting, I take more than one shot, which helps me select the best one at the editing stage. More options mean that I have scope to experiment and finalise the one that makes the most sense. I used minimal post-processing to keep the picture as real as I shot it. The most I do to the photographs is negligible airbrushing, to make people look their best. After that, I combine both the portrait and the picture of the elements that make up their bag to form a diptych. By creating this diptych, a relationship between the person and the details that prove to be essentials components of their daily requirements, is established. This series of photographs that I have now come to collect over the past three years is called ‘Persona’. These pictures tell true stories about the different personalities and identities I set out to discover every day.

My Equipment: I originally went about shooting them using a Nikon D40. I now shoot on a Nikon D90. I used to shoot with a 24–70mm f/2.8, but now almost always shoot the portraits with a 50mm f/1.4. Its feels more crisp and I enjoy the portraits shot with it. 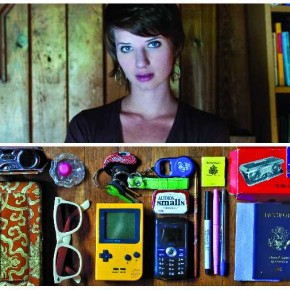 I used wood to create a connect in this image. It forms the background in both images in this diptych. Photograph/Jason Travis 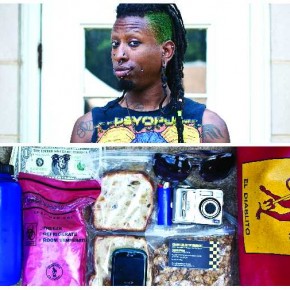 The placement of various objects is important and the frame must be balanced too. Photograph/Jason Travis 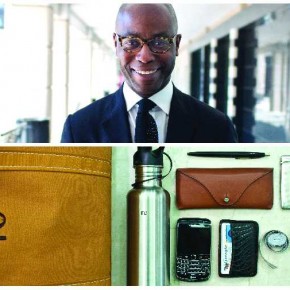 Since the number of items were less, I let the bag dominate half the frame here. Photograph/Jason Travis 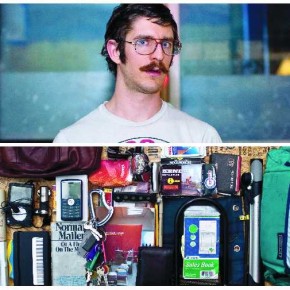 This portrait is interesting because it stands out from an ordinary smile, and captures his mood and personality. Photograph/Jason Travis 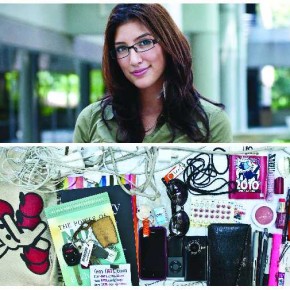 With several objects, I would use a plain white background to avoid distractions. Photograph/Jason Travis 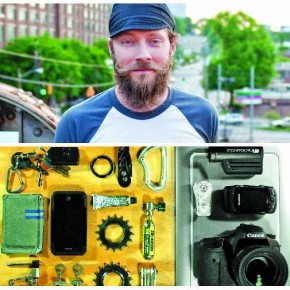 While shooting metal belongings, I decided to use a bright yellow background to complement the objects. Photograph/Jason Travis 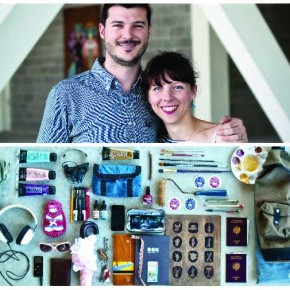 I used a white backdrop for these objects to complement the white planks behind the couple. Photograph/Jason Travis