The image highlights the Ganges delta, in Bangladesh and India. This image was created by combining three Envisat Advanced Synthetic Aperture Radar acquisitions made of the same area. The colours in the image result from variations in the surface that occurred between acquisitions. Image Courtesy: European Space Agency

Our insatiable hunger to explore has allowed us to cross through several frontiers. With advancements, we have also seen planet earth from space. Supriya Joshi takes a peek into the complexities and intricacies of the planet we call home.

The late astrophysicist Carl Sagan once wrote an iconic piece of work called Pale Blue Dot: A Vision of the Human Future in Space, inspired by the photograph of the same name. The photo was made in 1990 by the Voyager 1 space probe and it features the earth photographed from six billion kilometers away. Against the infinite space, planet earth features as a mere fraction of a pixel. The rolling hills of a farmland in the northwest United States are pictured here. The area is an agricultural zone and produces wheat and legumes, and the landscape has sometimes been compared to Tuscany in Italy. Image Courtesy: Korea Aerospace Research Institute / European Space Agency

But for this fraction of a pixel, Sagan said, “the aggregate of our joy and suffering, thousands of confident religions, ideologies, and economic doctrines, every hunter and forager, every hero and coward, every creator and destroyer of civilisation, every king and peasant, every young couple in love, every mother and father, hopeful child, inventor and explorer, every teacher of morals, every corrupt politician, every ‘superstar,’ every ‘supreme leader,’ every saint and sinner in the history of our species lived there—on a mote of dust suspended in a sunbeam.” The Kompsat-2 satellite captured this image of the sand seas of the Namib Desert. The blue and white area is the dry river bed of the Tsauchab. Image Courtesy: Korea Aerospace Research Institute / European Space Agency

However, if you take a closer look, you will realise how beautiful earth. Space agencies like European Space Agency (ESA) have been meticulously documenting planet earth. While the purpose of their study is scientific, for photography lovers, each image is a veritable treat. They get us that much closer to understanding the enigma that is our home, our planet earth. The golden curving patterns in this photo is Dasht-e Kavir, central northern Iran’s salt desert. Here, the clay and sand soil have a high surface salt content because of the concentration of minerals from high summer evaporation. Image Courtesy: European Space Imaging

View all the stunning images from ESA’s collection on http://bit.ly/1pZ8see 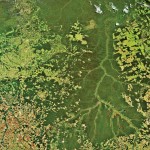 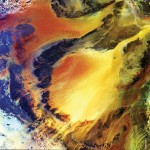 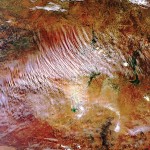 This image showcases the Lake Eyre Basin, one of the world’s largest internally draining systems, in the heart of Australia. The white cloud streaks juxtapose the vast amounts of crimson soil and sparse greenery. Image Courtesy: European Space Agency 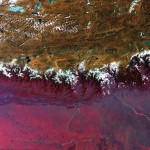 You are looking at the very top of the Himalayas. The mountain range also acts as a barrier between the peaks of the Tibetan Plateau and the plains of Nepal, Bhutan and India. The reds in the image symbolise lush green vegetation. Image Courtesy: European Space Agency 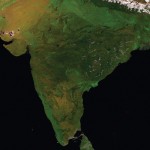 From the Himalayas all the way to Sri Lanka, this expanse of land contains the most unique and versatile ecosystems in the world. Image Courtesy: European Space Agency / VITO 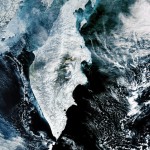 The unusual phenomenon of the simultaneous eruption of two stratovolcanoes, Kliuchevskoi and Shiveluch on Russia’s Kamchatka Peninsula is captured in this image. The lava from such eruptions tend to be explosive, but from space, the occurence has a strangely calming effect. Image Courtesy: European Space Agency 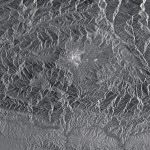 Pictured here is Kathmandu, Nepal’s capital city. It is almost surreal to imagine a city in such an abstract manner. However, this abstraction is, in fact, our reality. And in its own way, it dwarfs our inconsequential everyday worries. Image Courtesy: European Space Agency 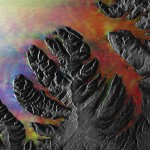 Shaped like a Christmas tree, seen here is the Westfjords peninsula in northwest Iceland. This image was created by combining three radar acquisitions between 2004 and 2008. Image Courtesy: European Space Agency