Two monks have been captured midway through their walk down a long, desolate road, effectively conveying the remoteness of the terrain and the length of the monks’ journey. Photograph/Ajay Jain

Ambarin Afsar tells you how to identify, emphasise and accurately place the star of your story to create compositions that immediately rivet the viewer’s attention.

Regardless of whether it is a romance, comedy, satire or even a tragedy, each movie has one constant character—the hero. The story is woven around and centred on this leading man. Similarly, a photograph needs to have its own star or main subject. Just as the hero pulls the audiences to the theatre, the main subject too, acts as a point of interest and draws the viewer into your picture. However, a bad placement can put the viewer off—if he cannot locate the main subject almost instantaneously, then the story fails to make an impact. The viewer’s eyes wander all over the frame as he cannot tell the protagonist from the supporting cast. It is much like spotting one person’s face from a huge crowd. So, here are a few tips to ensure that the hero of your story does not go unnoticed and that your story becomes a blockbuster.

Fill the Frame Dramatically
Theatrical close-ups used in television serials ensure that you do not miss the reaction of the protagonist. Similarly, when you get extremely close to your main subject, it fills the frame from edge to edge and cannot go unnoticed. Imagine a bold white sail against a background of dark water, the piercing face of an owl, crinkled lines on the hands of an old lady or even a soft orchid. A tight close-up of these subjects would create evocative, poignant images.

The World From Afar
You might think that stepping away into the distance might not really emphasise the hero of your story. However, a striking red lighthouse against the vast expanse of a deep blue sky creates a stark contrast. Similarly, a small figure in an empty playground would emphasise the isolation and the loneliness of the figure. A single frog peeping out from the glassy surface of a pond would rivet the viewer or even few farmers working in an open green patchwork of farms. Depending upon the mood you wish to create and the sense of scale and size you wish to convey, moving into the distance or filling the frame can considerably affect your photograph.

Step Up, Step Down
If most placements seem boring and dull, then simply try moving two steps forward or backwards. You see the frame changing instantly when certain elements, such as the pole behind your model’s head or an undesirable fence vanish by a tiny change in position.

Conversely, you might have ignored elements that create interest and add to the frame such as a quiet little bee hovering over a flower. By moving yourself just a little bit, you can include these minute aspects which would add to the beauty of your image.

Left, Right, Left
Move towards the left, the right and explore the subject from all sides. Do not stay frozen in one position because it will give you boring, static images. A flower can look completely different when shot from above, below and from the side. Similarly, if you are shooting someone at their workplace, then move them around in their cubicle to find a frame that conveys their workplace, their personality as well as their work culture.

Even the biggest of superstars and a great concept cannot help a story from failing at the box office. Therefore, the execution and placement of your subject plays an important role and cannot be ignored. However, do not give up hope if a particular position does not seem to work. Keep experimenting till you know that you have a hit on your hands. 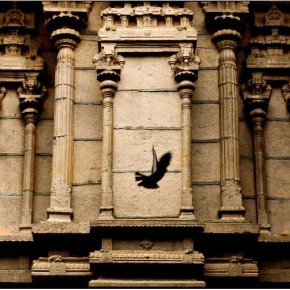 The pigeon captured in mid-flight framed by the ornate wall of a monument creates a point of interest in an otherwise oft-explored composition. Photograph/Arun Kumar E V 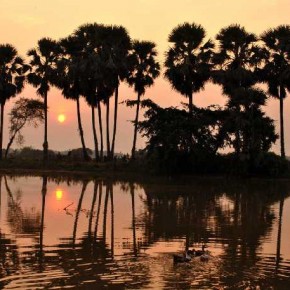 Reflections can seem incomplete without a defining subject. Here, the skillful inclusion of ducks in the lower half of the frame brings more meaning to the composition. Photograph/Gautam Sen 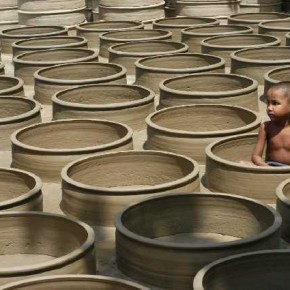 In this image, the off-centre placement of the child gives the viewer a sense of the surroundings. Also, the manner in which the child is sitting inside one of the pots conveys the innocence of childhood. Photograph/Subir Halder