The minds that planned the Tower of Babel cared nothing for the workers who built it. The hymns of praise of the few became the curses of the many. Photograph/ Francesco Romoli

Francesco Romoli tells us surreal stories in which ruined buildings, lost in some desert beyond reality, are only reflections of what used to be. The last building of a ruined city and his illusions. Photograph/ Francesco Romoli

Things that seem to be real but are not really so have always fascinated me. My goal was to build a city between reality and fantasy, on the border of the dream. Imaginary Towns depicts ruined buildings, lost in some desert beyond reality. They are reflections of what was, of characters living in houses that no longer exist. A world cast beyond the frontiers of our own, with the adventures of fragile beings. Beings for whom a thousand years will not be enough time to grow. An old lady waiting for it to end the night on a bench. Photograph/ Francesco Romoli

My Perspective
I love dioramas. They are always on the border between real and unreal, like all my works. In addition, I really like to build things and do something with my hands, as it is an added value to my project. Firstly, I plan my sessions of shooting and try to imagine what will come out. Sometimes, to get an idea of what will emerge, I make some pictures with a Polaroid camera. When I am satisfied with the photos, I start the postproduction. What can we really define real? Photograph/ Francesco Romoli

The Process
The most important thing is that the subject and the background lights have to be consistent and should not have differences in terms of brightness. That is when I cut out the subjects meticulously. Usually, I prefer to use the pen tool, although I need a lot of time. I use textures while processing. Experiment and play a lot with blending modes and opacity levels to get what you want.

Another important technique to show realism is the creation of shadows. Usually I create a new layer and I draw the shadow with a black brush with low opacity. The last step is to get a surreal look. I usually use the Nik Efex Pro filters.

My Equipment
I used a Canon EOS 600D with the Canon EF-S 17–55mm f/2.8 IS USM lens. The flash was a Canon 430EX II. To manage the external flash, I used a trigger. The trigger is essential; with TTL, I wouldn’t have been able to achieve the desired light. The software I used was Nik Efex Pro filters and Photoshop CS6.

The Journey Towards Making Imaginary Towns A Reality 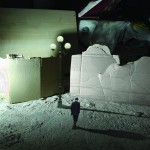 Lighting is the most important thing, from a technical point of view. Cut out the subject and accessories and paste them in the right place. Photograph/ Francesco Romoli 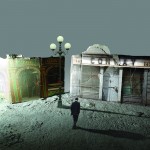 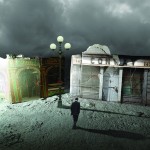 Add the sky and equalize the differences. A good software like Nik Efex Pro becomes a useful tool to save time. Photograph/ Francesco Romoli 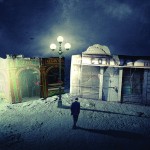 Adjust the contrast, hue, saturation and other parameters to give the photograph its final surreal look. Photograph/ Francesco Romoli

To view more of Francesco’s photographs, you can visit http://www.russelaid.com