I use my shadow and a pair of running shoes to express an absence within myself. Photograph/Pol Úbeda Hervàs

What happens when you separate the person from the shadow, the self from the whole? Pol Úbeda Hervàs explores this in a series of self portraits.

There was a point in my life where I hardly recognised myself. These pictures came to my mind naturally, as a means to reflect the way I feel about myself. The name, too, came in quite naturally because the real me was just not there. How do we accept that we are changing? How do we accept that we hardly recognise ourselves in certain situations? I am changing at this very moment of my life. I do not the react in the same way that I used to. I am surprised by this. Is this me? These pictures display the way I see myself now. My shadow is there, but I erase myself because I do not know who I am any longer. The shoes remain only to make sure that there is something more than… a shadow.

My Perspective
I was not really inspired by some other project or an accidental shot. The idea behind the images emerged just from a need to express myself. This series taught me that introspection can take various forms. Photograph/Pol Úbeda Hervàs

The Process
I always carry a camera along with me so that when I see a place that appeals to me, I shoot there immediately. It is important for a location to strike the right chord with me. All the locations where I make these pictures are not really spots I have scouted for previously. I just chance upon them on the go.
I am quite quick with each shoot. I simply make three or four pictures per location and then move on. I do not make a whole bunch of pictures simply because I do not need more. The reason behind this is that I began photography with an analog camera. The experience of shooting film makes one much more focused. You realise what you really want to achieve and how to go about it. In a way, it also makes you realise the true worth of every picture you make.
It is always hard for me to know where to stop making a series. So, in this case, I decided not to take more pictures till I felt the same way again. This may happen in a few days, a few years or maybe even never. It is important to think this way because while the series is easy to attempt, I do not want it to merely be reduced to an exercise. I do not want the photos to lose their significance for me.
As far as the technique goes, I will keep it a secret. However, I will just say this much, if you observe my pictures closely, and try making a couple of shots, you will hit upon the idea yourself.
It is quite simple, really—just think of it as removing yourself from your shadow. How would you go about achieving this in a software? Needless to say, this series was an enlightening experience for me, I found out a lot about myself and how people change. This is exactly what I needed when I started this project.

My Equipment
I usually use a Nikon D800 with a 24–70mm f/2.8 lens. When I am travelling, I use a Leica M8. However, the only thing you need is a reason to make pictures. Always keep this reason in your mind. The colour palette is important. The subtle pastels of the series further helped establish a certain kind of mood. Photograph/Pol Úbeda Hervàs

Tips on Creating a Series of Shadow Photos

This article originally appeared in the April 2013 issue of Better Photography.

To see more of Pol’s work, you can visit his Flickr page, www.flickr.com/photos/polubeda 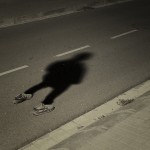 To me, this image conveys a sense of loneliness typical of urban areas. Photograph/Pol Úbeda Hervàs One of the things that this project taught me was how shadows change and lengthen during different times of the day. Photograph/Pol Úbeda Hervàs