If this photo had sound you would hear us roaring loudly at the top of our lungs. Photograph/Alex Neary

A two and a half-year-old takes charge of a photo project by choosing the poses and the locations, besides making his nanny, Alex Neary, copy him.

Besides being Henry’s nanny, I am also a portrait and wedding photographer. So, the little guy has had to pose for my camera every single day, for the past year and a half. One day while we were at the park in October, Henry turned to me and said, “Hey Alec! Take a photo of me like this!” He was lying down over top of a toy dump truck in the most bizarre way, but I thought it quite amusing, so I took his photo. He then said, “Ok, now you do that and I will take a photo of you.” So I showed him how to hold my iPhone and what icon to push. I was impressed by how quickly he got the hang of it!

My Perspective
I posted the images to Instagram and was shocked at how well received they were. People thought it was hilarious. Then, it kind of developed into an accidental happy little photo project. Every day after that on our walks to the park, he would tell me to stop because he wanted to strike a pose. I would be pushing him in his stroller and he would say, “STOP! STOP! I want to do a pose there!”

At first, Henry would want to pose every day, but after a few weeks his interest started to wane and he was not keen on it as often. Since I want this to remain fun for him, I don’t push him to do a pose if he doesn’t want to. I think he is learning to use his surroundings in a creative way and he is looking at the world in a new light. I am not sure we will ever know how or why he chooses a place or a pose. But, I guess that is the beauty of it. His direction for this photo was to slowly drop the pebbles in our hands onto our heads. He wouldn’t make my photo until I dropped at least one pebble. Photograph/Alex Neary

The Process
All of this is completely Henry’s choosing which continually amazes me because often, he has more creative ideas than I do. I typically use my phone as my point-and-shoot and it has worked for this project because of its light weight and small size. Getting the picture takes a few tries too, but it depends on the location. If it is outdoors with good light, then usually he gets it right in a couple of tries, but if the location is indoors then it might take up to 5 tries to get a decent image.

Since he is very young and his hands are so tiny, not to mention his limited motor control skills, the iPhone is very easy for him to control. He is still learning how to focus it (by tapping the screen. But it is a challenge that I am sure he will overcome with time, as he grows older. However, sometimes, it is hard to get a sharp image indoors especially because Henry has trouble holding the camera perfectly still.
I am finding a lot of joy in doing this project with him. To see a little kid use his creative imagination in a way like this brings me nothing but happiness.

My Equipment
Since Henry is so young, we use my iPhone for all of these images. The iPhone has a very simple button to press to make a picture, and Henry finds it easy to use.

This article originally appeared in the February 2014 issue of Better Photography. I love the texture of the peeling paint but I love his pose even more. It makes me truly wonder how his little mind creates something like this. Photograph/Alex Neary

Tips for Involving Children in Your Project

To view the rest of the photographs from this series, you can visit www.wildeyed.ca/henrysconcepts 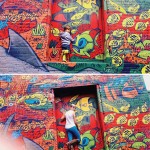 This one seemed to be a bit difficult for him to take. It took about 5 tries and I had to settle for this image with his finger partially over the lens. But, I like the beautiful imperfection of it. Photograph/Alex Neary 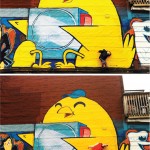 This was taken on Halloween and he is wearing fire engine pyjamas. These are the little details that make the shot even more fun! Photograph/Alex Neary 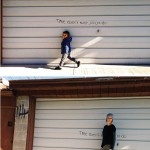 He asked me what the words on the garage door said and after I told him that it said “Time doesn’t exist, clocks do,” he said, “Yes, let’s do a pose there.” Photograph/Alex Neary