This is another of my favourites from the series and was shot at the beach, in the evening. The tilt of the horizon and mirrored images within the base image are what make this picture so fascinating. Photograph/Ambarin Afsar

Art, reality and the Fibonacci—Ambarin Afsar explores the bounds of perceived reality, through a combination of photo frames and spirals.

Taking inspiration from Frank Zappa’s quote, I set to work on a photography assignment that took an ordinary object, word, thought or a theory and reinterpreted it in as many ways possible. I chose art frames.

Conventions define how we interpret things. The more we are dominated by these conventions, the more these things are in danger of becoming cliché concepts. The key to re-interpret a concept. To find new meaning, a new perspective, a new view, to discard old clichés and innovate.

The Real world and Art have always been regarded as two separate but interdependent entities. Art imitates life to an extent. A photograph is the replication of actual objective reality and hence translates itself into perceived reality. The object within the frame doesn’t change, but the perception of it, does. What if the real world steps into the frame and the boundary between the Real world and Art no longer remains?

My Perspective
I was really fascinated by the Fibonacci sequence, and hence, spirals, as they draw you in when you look at them. I wanted my images to have a similar impact upon the viewer, and that is why I decided that I would try to merge the two concepts of frames and spirals for my assignment.

The Process
I used two frames – a black fibre frame and an old frame that was falling to pieces. The shoot and the processing of the pictures took one whole day.

Once I finished shooting the base images, I had to process them in Photoshop for them to look the way I had conceptualised.

My Equipment: I used a Canon PowerShot A710 IS and two photo frames. Choice of camera is not paramount, but a camera that allows you to manually control exposure is always better—be it a compact, or an SLR. 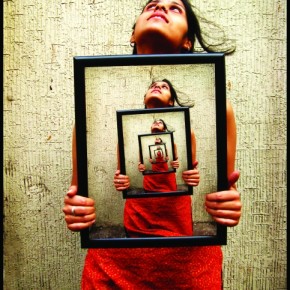 This was shot in one of the by-lanes of the Kala Ghoda area. I like the texture and colour of the wall. The stark colour contrast between the girl’s kurta and the wall lends itself to a stronger picture. Photograph/Ambarin Afsar 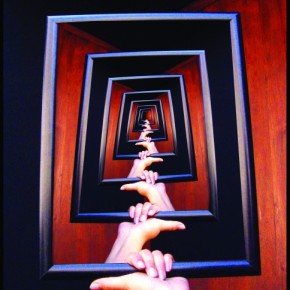 The picture was shot outside a closed store. I liked the clear duotone colours of the door and the doorframe. I flipped Layer 2 in this picture and kept alternating between flipping layers to achieve the final image. Photograph/Ambarin Afsar 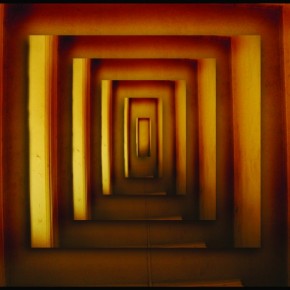 This is a photograph of the ceiling outside the Westside Store at Kalaghoda. It is a simple image and one of my favourites. Photograph/Ambarin Afsar 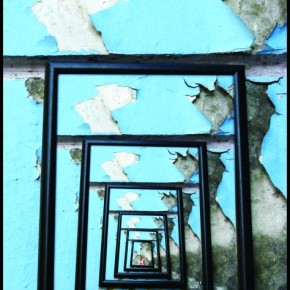 This was a photograph of a wall outside a Synagogue that had chipped, flaking paint and a rusted nail in the middle of it, upon which I hung the frame and placed an empty cigarette packet in the frame. Photograph/Ambarin Afsar