Areg Balayan shares a glimpse of his life as a soldier, and how he turned to photography in order to keep himself grounded around the chaos of his reality. 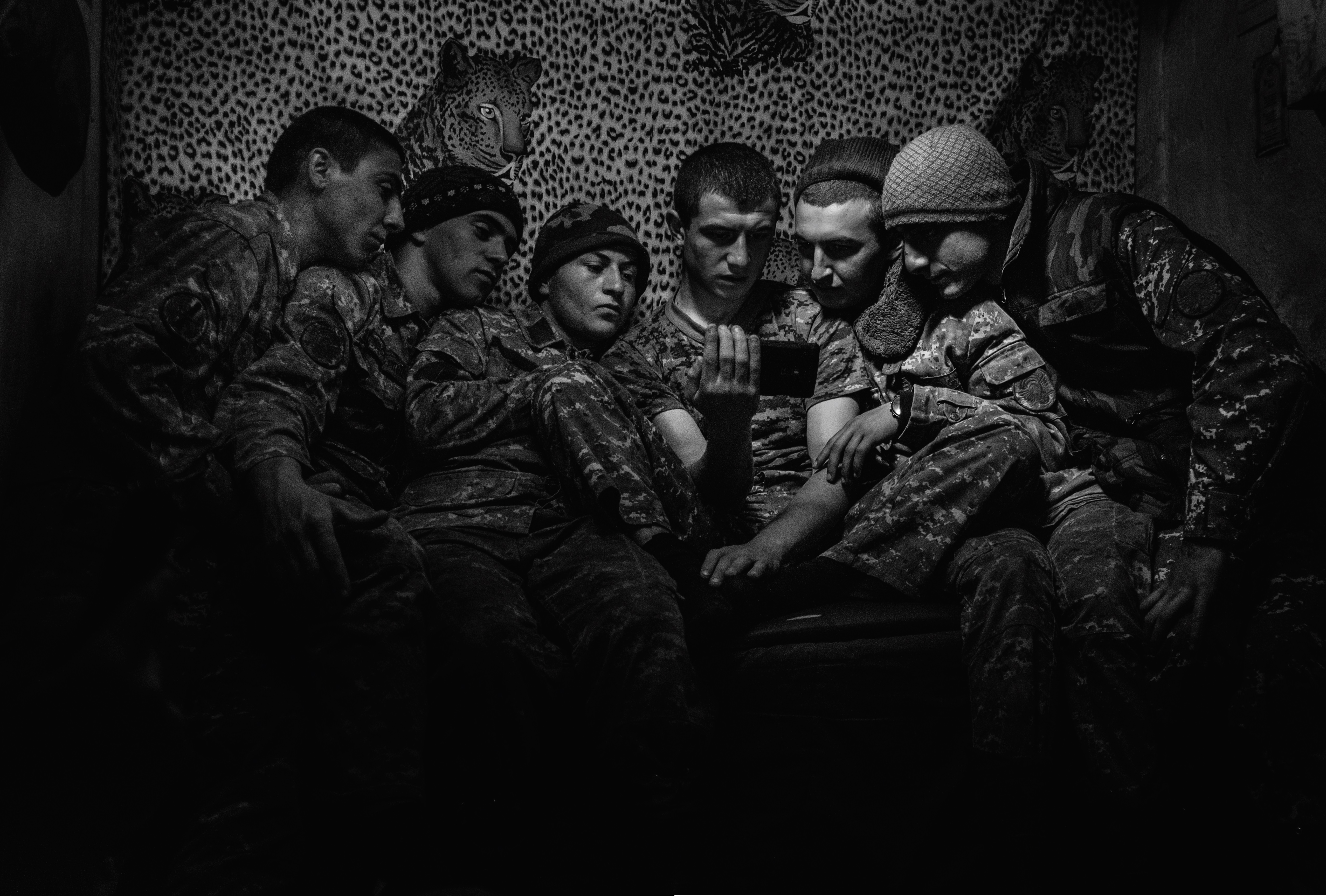 Lord of the Flies. I came back from one of my leaves with a video downloaded on my smartphone. It showed an Armenian mixed martial arts fighter beating an Azerbaijani rival and dedicating his victory to the soldiers, that is, these boys. Photograph/Areg Balayan 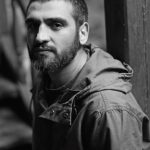 Our eyes awoke to a bright and sunny morning, but it became abundantly clear that the ongoing events had, indeed, already hit the proverbial fan. We were called and placed at the most distant border outpost. I was designated as a Private into the Karabakh Defense Army to fight the war that brought back a sense of liberation to the people of Nagorno- Karabakh Republic. Yet, on 2 April 2016, the day I got the call, I felt like I died.

Looking back at my tangled childhood in Yerevan, Armenia, my birthplace, I reminisce playing yard games and attending several hours of school, every day. I was fascinated by visual arts. Out of curiosity and for the experience of capturing the beauty that I saw, I started painting from an early age. Later, I turned to photography, as I continued my search for a different visual language. I had quite an impulsive childhood and youth. However, what defined the lives of my mates and I was the collapse of the Soviet Union in 1988. Its consequence—the war— which we still face, hardened our youth early on. 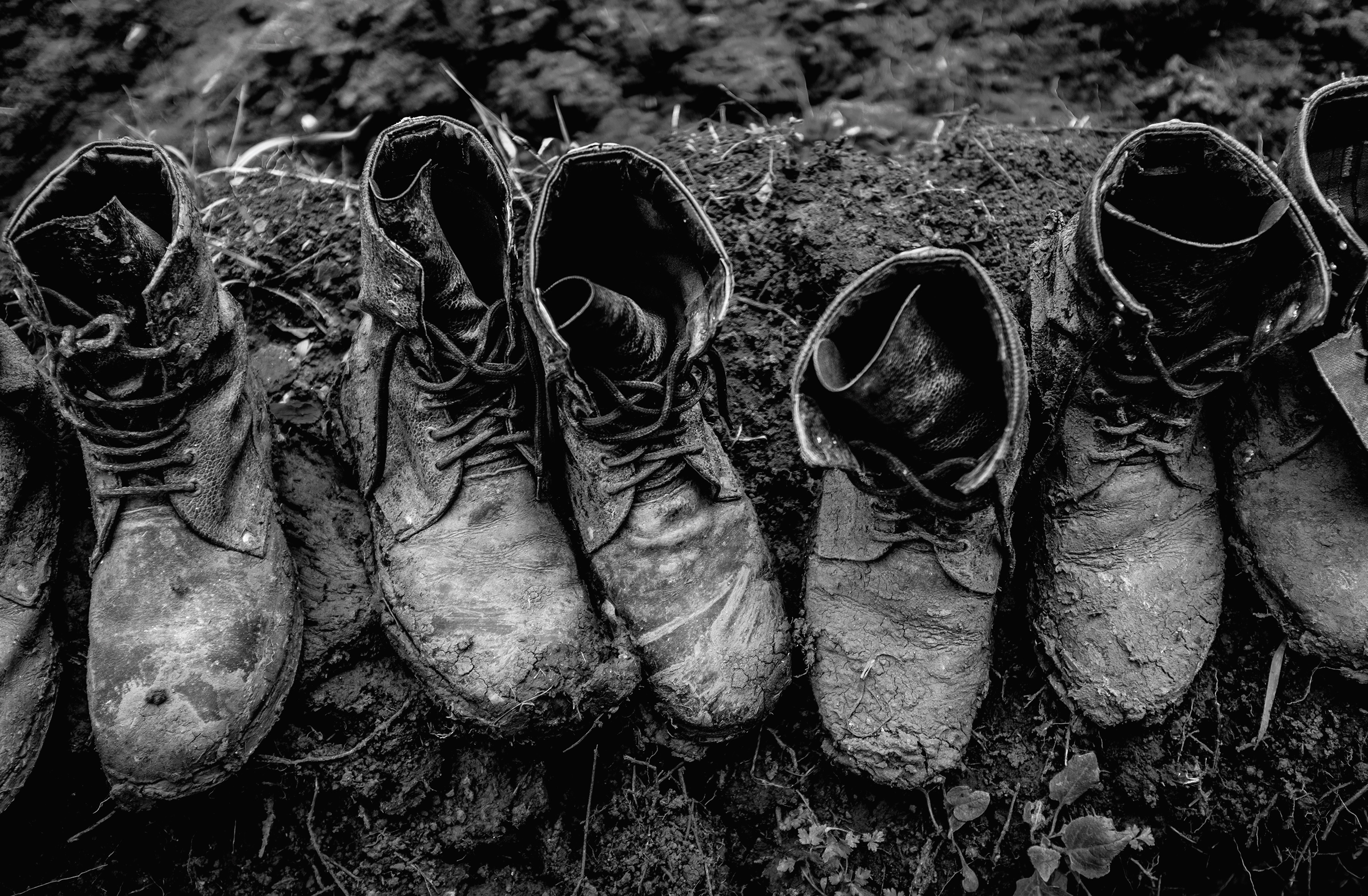 Winged Boots. An extension of feet—combat boots— eventually became indistinguishable from the feet themselves, a weird prolongation of human flesh. Photograph/Areg Balayan

Humanity hasn’t created anything more illogical than war. War is frightful. It’s a place where one is ready to kill somebody without knowing them. It’s a place where people live in extreme contrast. When I first received the call to report at our hub (called ‘mobilisation’), it was clear that we were being sent to the border for war, and there was a chance that we would not be coming back… that I would not see my wife and two children again.

It was not something new to me, as this was my second posting. I was younger then, but this time around, my comrades looked at me as a friend, an elder brother and sometimes, as a father figure. The boys just wanted a little warmth, especially since they were away from home. 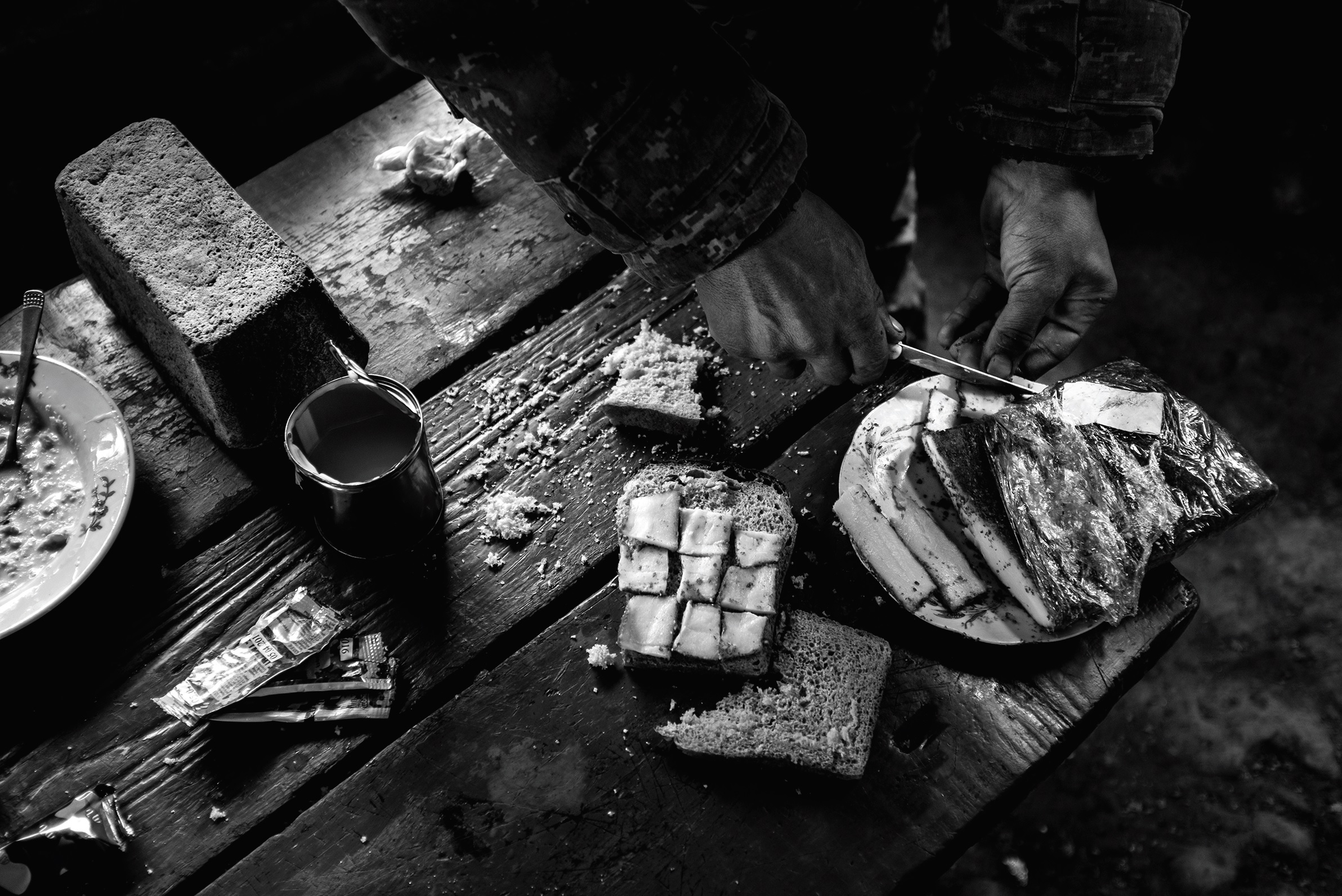 Our Daily Bread. I taught my younger brothers-in-arms how to cut the tinned, stewed meat into cubes, as it was the easiest way to get rid of extra sinew. Photograph/Areg Balayan

That is when I decided to shoot MOB (Military Mobilisation), Seen from the Inside. I did not take my camera then because it was very unlikely that we would make it back. The camera also posed a threat and a means of leverage with which I could be taken as a prisoner of war, and the photographs appear in the hands of the enemy. So I began sketching our day to day activities—our initial days at the mobilisation. At some point, I got a day off to go home, and that’s when I got my camera along, on my return to the hub. In retrospect, I think I got lucky. 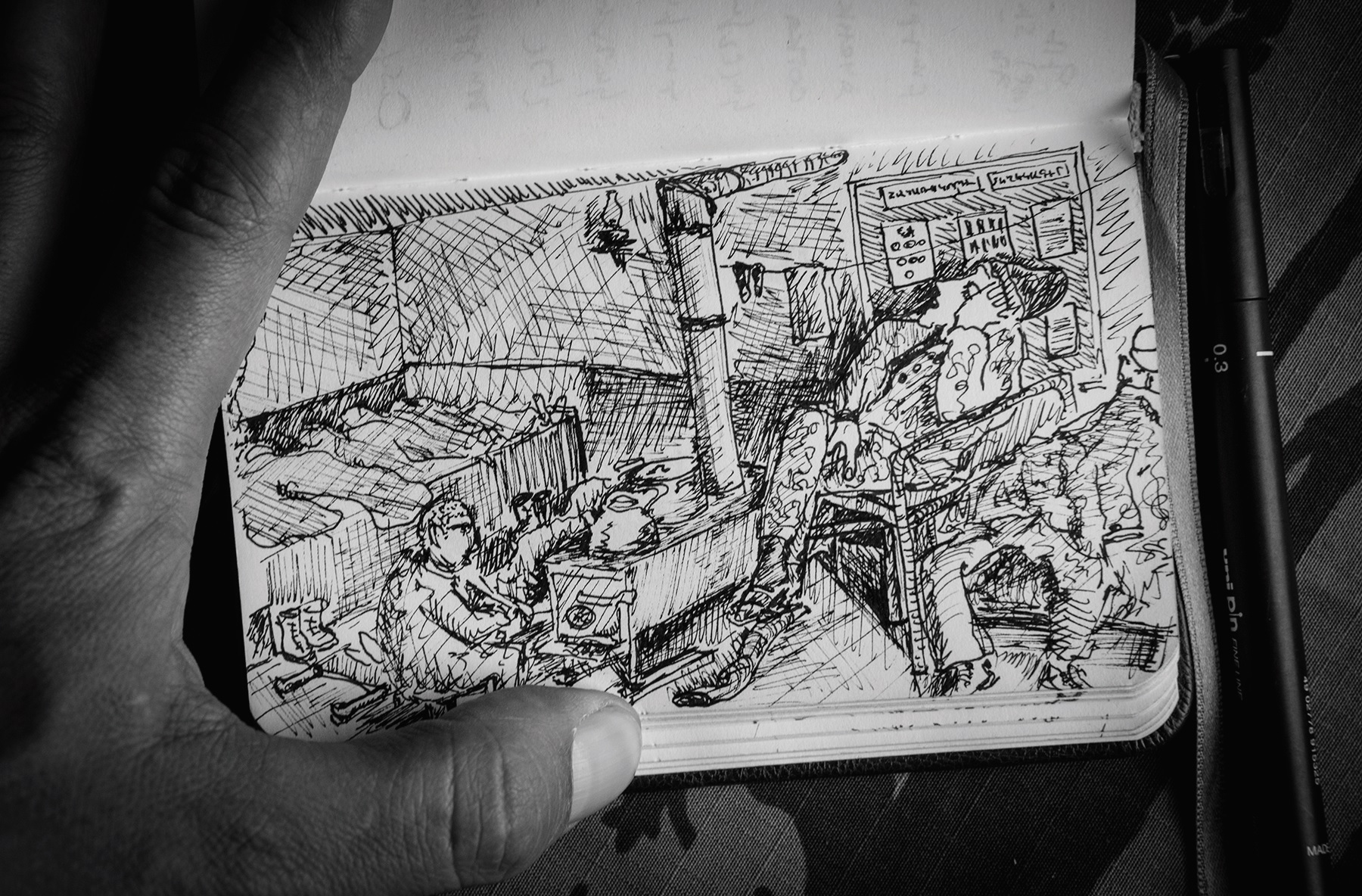 The fireplace was the only dream spot of our reality. There we were, all coming together to warm up, drink hot tea or a coffee, and most importantly, to get a couple of hours of sleep. Photograph/Areg Balayan

MOB (Military Mobilisation), Seen from the Inside is not a project for me, it was and is my reality. It is the story of when I was a soldier, armed and in the arena, every day, there to protect my brothers at war and more importantly, my family. I began photographing just to stay sane, and to step away from the madness that was happening right at my footsteps, day and night, for months on end. Photography became my prayer, something that rescued me from the war. I learned quite a few things… That when you look through the viewfinder of the camera, you realise new perspectives and question your surroundings from a different point of view. In order to find the answers, you understand a new reality. That viewfinder is a magical window because very different relations are being formed between yourself and the world. 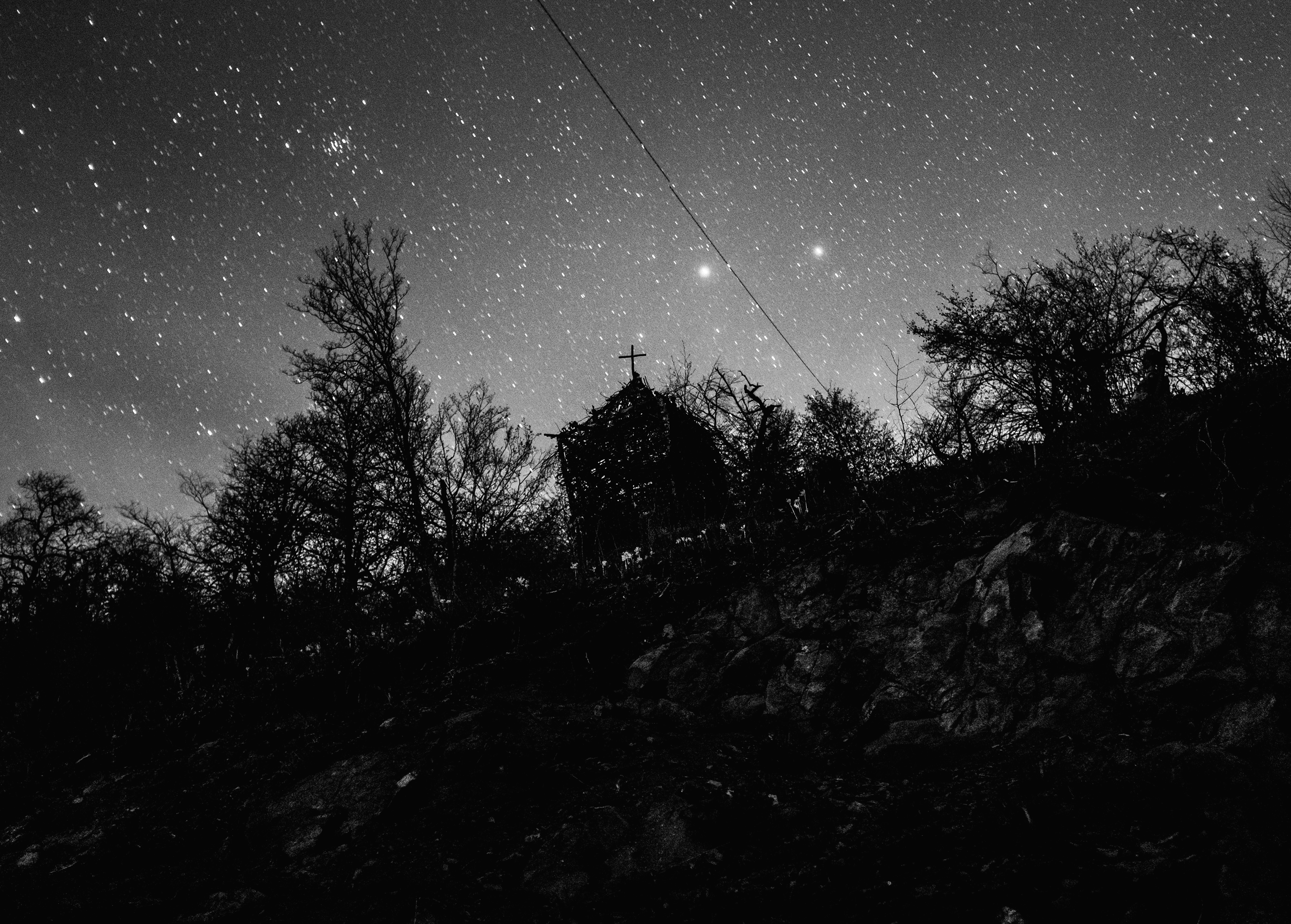 Night Landscape, with Chapel. The wooden chapel served as a guiding light for those wandering in the deserted mountains. Photograph/Areg Balayan

I loved my comrades and lived each and every moment with them, even if the camera did not capture it all. We were each others’ family, towards whom we had a bigger sense of responsibility than our own selves. War teaches you one of the most powerful lessons, but there is a condition. You need to stay alive.

—As told to Suhani Lakhotia

Areg Balayan is currently working on a project to show the relationship between the impact of war and human lives using contemporary arts. After 11 years, he has moved back to his childhood home—where he lives with his wife and children. 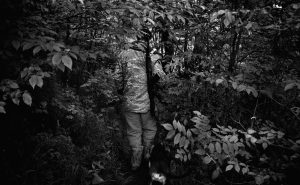 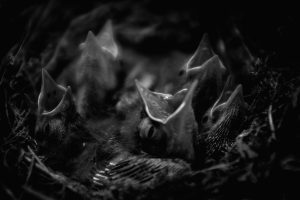 The Nestlings. The baby birds were the accurate metaphor for the life of the Privates that I saw every day. Photograph/Areg Balayan 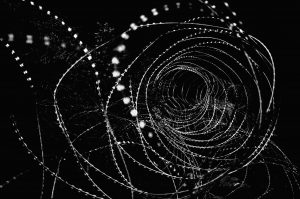 The Vortex. The barbed wire fence, a border strip defense, may eventually develop in a kind of funnel or a vortex. Photograph/Areg Balayan 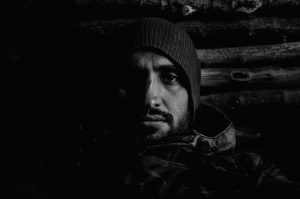 A Stranger. A self-portrait that is more of a portrait of a person I turned into during the war. Photograph/Areg Balayan 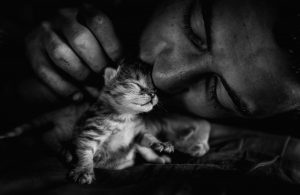 One to Protect. The families of the soldiers who they were to protect, were left behind. The helpless took solace and comfort in the animals. Photograph/Areg Balayan 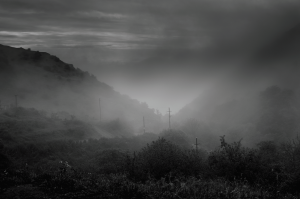 Tranquility, and Fog. Electric towers, covered with fog, reminiscent of the Calvary (where Jesus was crucified). Although they have nothing to do with death, they are traces of human activity on the surface of Earth. Photograph/Areg Balayan 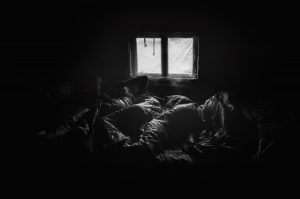 Canned Herring. Our outpost wasn’t spacious enough to provide every soldier with a bed, which was one of our favourite things to joke about—we liked, for examples, to compare ourselves to herrings in a can. Photograph/Areg Balayan 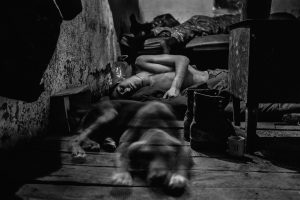 Finally, Some Rest. Street dogs and cats were frequent guests at the remote outpost. Photograph/Areg Balayan