Squares give you the opportunity to make simple yet striking photos. See how your eyes are immediately drawn to the vertical line in the centre of the image. Shot with: HTC One. Photograph/Ambarin Afsar

Have you felt that the square format is a little too restrictive? Read to find out why Conchita Fernandes thinks otherwise.

This story was originally published in April 2014.

Gone are the days when a medium format camera was the only way to shoot a square image. Now DLSRs, compacts and even cellphones, offer the option. Then Hipstamatic and Instagram entered the scene and presented us with a unique interface to look at a square photo. Yet, people tend to go wrong when shooting in this format. Here are a few tips to make your square picture-making process easier.

Locking Impact
Try out this exercise. Shoot a photo of your subject placed in the centre of a non-square format. Then shoot a similar image but in the square format. Now compare the two. The square image will definitely stand out more because of its equal ratios.

Pleasing to the Eye
Shapes and forms work better in a square image. Its 1:1 ratio makes it visually appealing to shoot geometrical or symmetrical subjects. For reference, take a look at photographs with a circular or triangular subject, embedded within the square.

Maintaining the Flow
Take a look at a rectangular framed photograph. Depending on the subject, your eyes will either move vertically or horizontally across the image. Now, look at a square image. Notice how your eyes move in a circular direction. Keep this point in mind, the next time you set out to compose a square photograph.

Using Squares for Diptychs and Triptychs
Square images always give a cleaner, linear and consistent look when combined to form diptychs or triptychs. They are also the easiest to put together to form a collage. Experiment with tight crops for interesting compositions. In this image, you are immediately drawn to the middle, thus highlighting the subject. Shot with: Google Nexus 5. Photograph/Namaah Kumar 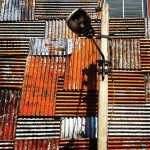 What makes this image stand out from the usual square compositions, is the use of contrasting elements. The textures too works well with the placement of the pole. Shot with: Samsung Galaxy Note 3. Photograph/Devansh Jhaveri 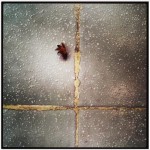 Hiding the Clutter
Squares give you the added advantage of highlighting the subjects of your choice, without any extra clutter. A rectangular frame may not be the best candidate for this.

Creating Dynamism
Diagonal lines and curves are a great way of adding dynamism to a square image. If you think about it, it provides a break to the stability of the square format.

Looking for Inspiration?
If you really want to have a visual of what the previous point means, head to David Alan Harvey’s Instagram profile @davidalanharvey. His square photographs are filled with the right amount of intimacy and vibrance. When it is required, a square does a very good job in filling up the image. In this photograph, the photographer has given the impression of a sky crowded with birds. In a rectangular format, this may not have necessarily translated in the same manner. Shot with: Apple iPhone 5s. Photograph/Nocco K