Faces of the Great Depression 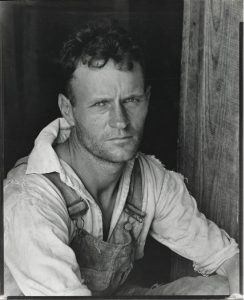 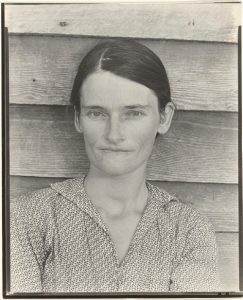 The Great Depression was photographed by some of the greatest photographers, one of them being Walker Evans, whose images captured a startling reality of the period. Commissioned by Fortune magazine, Evans and journalist James Agee, set out in the summer of 1936, to photograph the impact of the Great Depression amongst the sharecroppers in the South of the United States. Together, they spent several weeks with three tenant farmers and their families, observing their daily lives and activities. The two portraits above, titled Floyd Burroughs, a Cotton Sharecropper, Hale County Alabama, 1936 (left) and Allie Mae Burroughs, Wife of a Cotton Sharecropper, Hale County Alabama, 1936 (right) are considered to be some of the greatest photographs to have come out of the collaboration between Evans and Agee, and resulted in the publication of the book, Let Us Now Praise Famous Men (1941). The portrait of Floyd Burroughs’ undeviating gaze was even published on the cover of the book. On his part, Evans took an unrelenting approach towards the documentation of the sharecroppers and photographed everything from their clothing, to their sparse living spaces.

The Burroughs family lived in a four-room cabin. Nothing that the family possessed was theirs—the land, their home, mule or farm tools—everything was leased from their landlord. Being a cotton sharecropper, Floyd was expected to give half of his cotton and corn crop to his landlord, and with whatever remained, he paid of other debts that he incurred through the year on food, seed, medicine and fertiliser. In fact, the family were USD 12 in debt at the end of the year 1935. The portrait of Allie Mae, was a result of four exposures made by Evans, against the rear wall of the family’s cabin. Unlike Floyd, her expression is curt, resentful, even angry, conveyed through the “slight tilt of her head, the furrows around her eyes, (and) the angles of the pressed mouth,” as described by The Metropolitan Museum of Art.

This article originally appeared in the August 2021 issue of Better Photography.