I decided to completely eliminate the human element from the frame to create abstract forms. Photograph/Riddhi Parekh

Riddhi Parekh combines her penchant for stark, vivid colours with her love for a roadside cup of tea.

The first memory I have of drinking tea was in my college canteen. If you live in Mumbai, chai is bound to become a part of your daily life. Whether you are out with friends after college, going for a walk or returning home from a hard day’s work, you will stop for a cup of tea. Chai is synonymous with the city.

My Perspective
I have seen many people photographing tea stalls, mostly in black and white. They either capture portraits of the owner or those of the patrons in conversation. My challenge With the permission of the stall owner, I would move the glasses until the composition was exactly the way I wanted. was to find my own interpretation of the subject, which is why I decided to go for colour. With the permission of the stall owner, I would move the glasses until the composition was exactly the way I wanted. Photograph/Riddhi Parekh

The Process
The start of the project was impulsive. I just picked up my camera and walked to the nearest railway station, photographing all the tea stalls I could find on my way. Over the next three days, I spent a lot of time walking around different railway stations, interacting with stall owners.

I ended up drinking quite a bit of chai in the process! It was the only way they would let me hang around for hours. A few got suspicious that I was with the BMC (Brihanmumbai Municipal Corporation), carrying out spot health inspections, and so, they refused to let me shoot.

I have always loved the Pop Art movement for its bright colours that attract a viewer’s attention to the photograph. Since I wanted a similar look for this series, I had to compose my images in a manner that would complement the colour tones.

Contrasting colours and compositional elements like line and curves were extremely important. I was looking for patterns that were created by the position of glasses, kettle, shadows and other such elements that could be exploited to enhance the colours. I prefer subjects that had tea stains as they look very dynamic when the image is saturated. Photograph/Riddhi Parekh

For saturating colours, I used the Vibrance slider rather than the Saturation slider in Adobe Camera RAW. It produces similar results, but does not exaggerate the colour noise so much. Overall, it gives more pleasing results.
I would like to take this series of images further by shooting different tea stalls across India. It would be interesting to observe to see whether the tea habits of people change from state to state and in what way they do.

My Equipment: High-end equipment is not an essential. While I used a Nikon D90, the 18–55mm kit lens and a 55–200mm telephoto lens, even a basic compact camera is good enough. 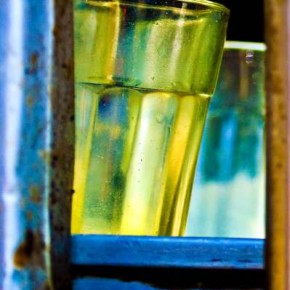 I was attracted to the way in which the light fell on the stained glass in this frame. Photograph/Riddhi Parekh 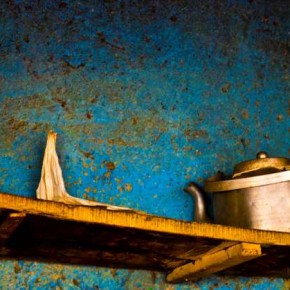 The walls and surroundings of the tapris are fascinating. I find them ideal for shooting urban decay. Photograph/Riddhi Parekh