I shoot anything colourful as it can make for a great graphical subject. Photograph/Nick Frank

Germany-based Nick Frank finds beauty in the symmetry and graphical colours of a shopping mall structure.

Being an Art Director in the advertising field, I have a knack for the strongly graphical and colourful. I like working with symmetry, geometrical shapes and lines. So when I saw came across Mira, a shopping center located in Dülferstrasse, Munich, Germany, I found the colourful facade layered and very interesting.

The shopping center stands in strong contrast to its immediate locality and surroundings. I really did not expect such formal and structured beauty in an urban habitat like that.

My Perspective
Since the images were about geometry, I chose to photograph in the square format. In my opinion, the pictures look much more balanced this way. In my work as an Art Director and a photographer, my approach is to reduce elements in a scene or a frame till the essence of what I want to show or capture, becomes visible.

I don’t like any distractions in my pictures. Therefore, I constantly make an effort to keep my compositions clean. My pictures do not show reality but my personal interpretation. Before making a picture, I always have an idea of what the finished image will look like. tried using the cloudless sky to my advantage. The blue of the sky creates its own symmetry here. Photograph/Nick Frank

The Process
At first, I was not able to photograph much. This is because the sunlight at 12 noon was really harsh. It burned out almost all the details and colours that I wanted to show in my pictures. So I decided to come back early on a Saturday morning at 8am. I made a few close-ups but then found a few cars to be blocking my perspective.

Hence, I came back the next day at the same time, hoping that my potential frame would be clear of any distractions. For these set of images, I kept moving near and far to capture close-ups and as well as a few wide angle shots. I constantly made sure that no cars, vehicles or people came into my frame.

While architectural photographers commonly use tripods for such pictures, I rarely use one and prefer to trust my handholding skills. I am also not a big fan of the Live View mode either. I prefer to trust what my eye is seeing. I believe that once you figure out what sort of images your camera gives you with a certain kind of exposure compensation, you don’t even have to check playback.
After shooting for two weeks, I processed the pictures in Adobe Photoshop CS6. First, I removed dirt and scratches from the facade and cleaned the sensor dust that was visible in the cloudless sky. I had forgotten to carry polarising filters. So I had to even edit out the reflections that were present on the mall facade.

The colours looked oversaturated, especially the red, yellow and purple tones. Therefore, I decided to add a colour gradient for a slight dreamy touch. I try to shoot as perfectly as I can. What I can’t control, I fix it in the software later on.

My Equipment
I used a Nikon D800E along with a PC-E 24mm f/3.5 and a 70–200 f/2.8 VR II lenses to photograph this series of images. I really like the D800E’s ability to show even finest and smallest details. The PC-E lens became crucial for me as it helped keep the vertical lines straight and avoid distortion. I kept the red columns as my main subject and included just the purple and yellow strips on the side. The grey road also adds some variation. Photograph/Nick Frank

Simple Rules to Photograph Geometry Around You

To see more of Nick Frank’s work, you can visit the website, www.iso72.de 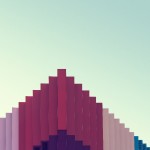 Here, I composed the shot such that the facade would be shaped in a triangle. The light sky allows the colours on the facade to pop. Photograph/Nick Frank 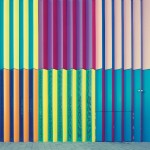 I kept moving a lot which let me visualise the same place from different perspectives. Photograph/Nick Frank