The greatest portraits of our time have been able to capture their subject’s personality. How can I do that with someone who I have just met?

As an example, imagine the pressure Yousuf  Karsh was under when he shot the iconic portrait of a scowling Winston Churchill sans his signature cigar? This was WWII, and Churchill was sending out a clear message to the Germans. Don’t mess with us! Also, what was going through Arnold Newman’s mind when he created the brilliant portrait of the music composer, Igor Stravinsky? The negative space has a silhouetted grand piano with an open lid that looks like a musical note. The maestro’s head and shoulders behind the instrument occupy only a small percentage of the frame. But that didn’t matter. It all came together, and Stravinsky liked the image so much that he was reported to have said that the photograph made him famous! It’s quite likely that both Karsh and Newman would have liked to have more time, but they found the essence in their subjects within the time that was available.

It’s abundantly clear that all professional photographers work with a proverbial gun to the head. There’s always a looming deadline. But, despite that, our responsibility is to deliver. The accompanying portrait of artist Anandajit is one such situation. I had travelled to Gujarat and was meeting him for the first time. He was in the midst of a new series for an impending show. I had less than an hour, so I had to think quickly and work fast. 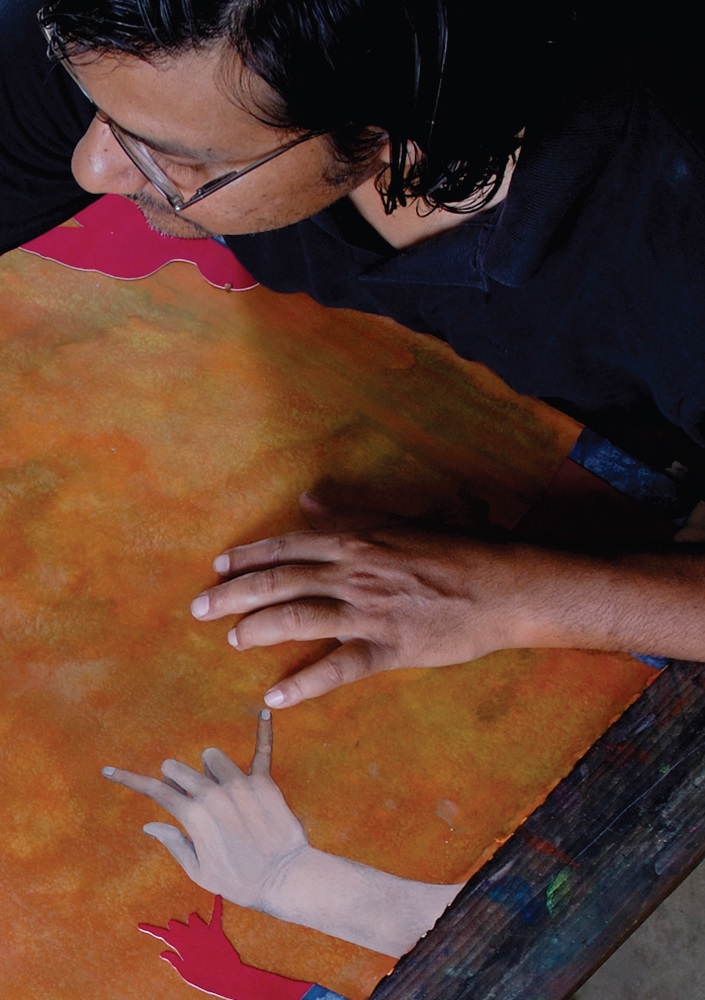 I bounced off the flash on a near wall, to light up the scene a little, because the light coming from the window wasn’t enough. I also liked his hand touching the hand in his painting.

At the top of the checklist was to make my subject feel comfortable. Then, my attention went to the space and the quality of light. Choice of lens, a good balance of ISO, shutterspeed and aperture, and finally, the right camera angle made a huge difference. Once those decisions were made, I felt confident enough to go ahead with the final shot. Most importantly, after completion, the artist in me has to be satisfied with the resulting narrative. All the above elements, along with a dash of luck, go into making a successful photograph.

In the image of Anandajit, I wanted to show the tactile connection between the creator and the work, which is why his little finger is connecting with the fingers in his painting. Showing his face clearly was not as vital as the intensity of the moment. Constructed photographs like this one are never random. You may not have as much time as you’d like, but you still have to put some thought into it.

The fact is that I can only perform under pressure when I have faith in my ability to execute. It’s a combination of thought and action. I’ve learnt through experience that though some stressful conditions can be extremely challenging, they can also be very rewarding.