Being displaced from the schools they were originally studying in, a number of children do not study here anymore. Photograph/ Akshay Mahajan

Akshay Mahajan captures the plight of those who have lost their homes in the name of development, and the rehabilitation woes that they face. “All you find is another slum, though of a concrete kind, one with far more dangerous social ramifications.” —Akshay Mahajan

This is the story of a 16-building cluster at Lallubhai Compound in Mankhurd, a far-flung suburb just within Mumbai’s city limits. The buildings rise ominously, each of them separated from the other by a space that can park only a single car. Dominoes in a hellish mass of concrete, only four of these buildings have access to direct sunlight. Housed in these rows of concrete are those who earlier lived in the slums. Welcome to Mumbai’s slum resettlement housing projects. No one moves to Lallubhai compound because they choose to. Their homes have been demolished under the claw of a bulldozer. The conditions in which they live over here are far from ideal. My photographs are an attempt to show how rehabilitation means very little. All you find is another slum, though of a concrete kind, one with far more dangerous social ramifications. After the supposed resettlement project, a sense of discontent has taken root amongst the people of the slums. Photograph/ Akshay Mahajan

Using a Wide Angle Lens to Portray a Story

About Akshay Mahajan
Akshay Mahajan is a photojournalist who discovered photography after a failed stint at engineering. He has been regularly shooting reportage and documentary assignments for a number of Indian and international publications and is also the co-founder of Blindboys.org, a community-driven photo space and website.

To see more of Akshay’s work, log on to www.akshayphoto.com 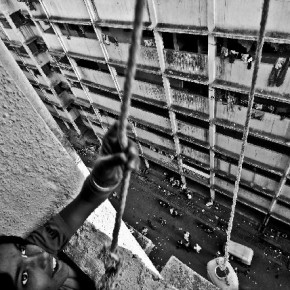 The buildings have no water supply, and the only option that the people have is to pull up water in tiny plastic cans. Photograph/Akshay Mahajan 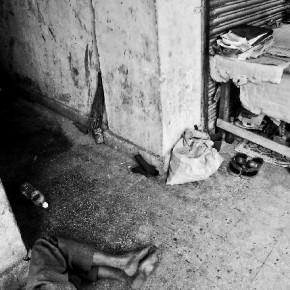 Unemployment is rife amongst the entire community. People have been moved far away from their original habitat and workplace. Photograph/Akshay Mahajan 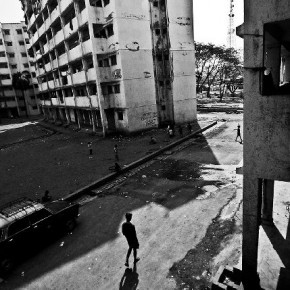 Not only is the rehabilitation area isolated, but is also a place that threatens to become a concrete slum in itself. Photograph/ Akshay Mahajan