Sanwariya, a danseuse performs a swirling movement during her performance. Photograph/Shobha Deepak Singh

Shobha Deepak Singh uses artistic blurs to bring the world of music and dance performances on to the photographic canvas.

With no formal training in the art of photography, my journey began around four decades ago. For over three decades, I have been the in-house photographer for the Shriram Bharatiya Kala Kendra. This opportunity allowed me to understand the varied textures of various dance performances. My eye was trained in the aesthetics of the visual as well as performing arts. Moreover, the opportunity let me develop an astute sense of photographing fleeting moments during dance performances.
One of my main objectives was to capture performers in movement. I wanted to capture their motion of dance, the way their bodies reacted to music and sometimes just their emotions.

My Perspective
I want my dance photographs to invoke a sense of oneness with the artist. My photographs record those whose art I value. As such, I always follow a traditional documentary approach that involves me being more observant and yet, unobtrusive.
I always look to make pictures that unveil and reveal other layers. For instance, a dancer becomes a devi or a devil with glistening fangs or when a waistband draws loose or the dupatta waltzes away or even when the veil tends to resemble wings.

The Process
For me, the performing arts are a very engrossing activity in themselves. They demand a lot of concentration and sometimes, it becomes hard to find that blissful moment which one can photograph.
Many a times, I become conscious of that second in which a particular dance movement and my potential image may disappear. In such moments, sometimes I just listen to the music and view the performer from the viewfinder.
But then, I don’t completely freeze the movement. I enjoy the effect caused by using slow shutterspeeds. It is the best way to showcase the emotion of the artist. Since I have spent over a lifetime with performing artistes of all kinds, from classical dancers, musicians to folk actors and troupes, photographs come naturally to me. What I photograph is both a documentary record of something that occurred, and a work of art in itself. More importantly, I don’t just make photographs. I enjoy the experience of watching such brilliant performances in front of me. I keep trying to make art out of what is already so stunning.

My Equipment
For these pictures, I used a Nikon film camera. I don’t believe in using a flash, tripod or a digital camera. To me, film is still the soul of photography. 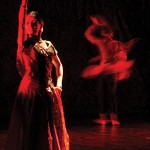 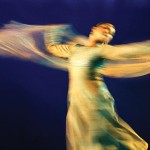