Make Your Birthday Pictures Stand Out Birthdays are filled with wishes, moments and loads of fun. Raj Lalwani lists a few simple tips on how you can capture the joy and excitement of the celebrations.

There is a birthday in the family and preparations are rushed. As you get ready for the celebrations, you try and recall whether everything is in place. Food, check. Cake, check. Invitations, check. But more importantly, make sure your camera is ‘checked’ too. Photography is indeed an integral part of all birthday celebrations. But while a number of birthday pictures tend to look similar, we do not realise that we can give such photographs a unique touch, using the most basic equipment. Keep these simple tips in mind to make your birthday pictures stand out.

Candid Moments are Sweeter
Birthdays are full of candid moments. The expressions of kids, the mood swings and interactions between them, the elders playing with the children, all make interesting subjects. To capture these, keep your camera ready at all times.
You can try catching their attention in different ways. Call out someone’s name and catch their expression as they look towards you. Alternatively, talk to them to capture their reaction. You can also shoot a number of frames of someone who is posing for you. They will wonder why you are taking so long to take one photograph and react in their own inimitable style. Inflatable castles with sea of colourful balls and balloons are quite popular in kids’ birthday parties. They make vibrant and lively pictures too, because of their candybright colours. Photograph/Cynthia Sapna

Capture People Bonding
Birthdays bring together family and friends. Establish relationships by shooting the way people, especially kids, interact with each other. Shoot in such a way that these interactions narrate great stories. Zoom in close on the two or three people you wish to capture, and let their smiles do the rest.

Shoot Before the Party
Capture the atmosphere at the venue, before the party has actually begun. The setting up of decorations and balloons, the hustle and bustle, the different moods and expressions of the birthday kid, are all scenes that make great birthday pictures.
Zoom in on the cake, streamers, or balloons. These are characteristic of each birthday, and their pictures will make your album complete. Besides the cake and the party decor, you can shoot a pile of gifts, or an array of food.

Have the Guests Arrived?
Every guest brings with them, their own personality to the party. Someone may walk in quietly, while another might choose to announce their arrival loudly. Have they got any gifts? Can you guess what the gift is by looking at the package? Catch the spontaneous reactions that occur at these times, especially those of the birthday kid. Images shot before the arrival of the guests help emphasise the pre-party preparations and can make your overall set of pictures more complete. Photograph/Ana Maria Santeiro

Time to Cut the Cake
This would be the most important part of any birthday. Shooting a photograph of the cake being cut can be quite challenging. Candle light by its very nature, lends a warm tone to a photograph. Avoid using flash unless absolutely necessary, so that you can capture that warmth. At this time, there are a lot of things you can shoot—the cake itself, the birthday kid making a wish, the candles being blown, the cake-cutting ceremony. People clapping and singing can also make good subjects. Capture expressions, especially during snacks. Use a shallow depth-offield to blur distractions in the background. Photograph/Ben Mcleod

Let us Play Games!
The games are usually the craziest and most fun-filled part of the birthday. It will also be the time when you will need to be most active, since you may have to go from one end of the room to the other to get a good photograph! To keep up with those enjoying the game and capture their joy, be a part of the revelry yourself, and shoot as many pictures as possible.
The continuous shooting mode of your camera will help you capture the essence of the action. It is usually better to enable the central focus point and select your focus rather than let the camera choose the focus for you. Experiment with different ends of the zoom. Include all the kids in the frame, and then try zooming in. Candles make great subjects too! Zoom in close and shade the lens with your hand to avoid flaring or ghosting. Photograph/Steve Woods

See Beyond the Poses
Posed shots can often be repetitive and mundane, so try to make them more interesting. Shoot pictures in which everyone has different expressions, or is looking in completely different directions. You could also pretend that you are done shooting, and then capture the moment when they ease out of their pose!

Make Everyone the Photographer
Never do the shooting alone. Pass the camera around to your friends and family members. Not only will you get to be part of the photographs, the others will bring their own style of shooting and may shoot subjects that you did not notice.
When giving the camera to others, who would be better to shoot the birthday than the birthday kid! So let the child record the birthday party in the manner he/she chooses to. Also, photographs from a kid’s perspective are often more dynamic, since things are seen from a different height. Learn from this while shooting yourself, and bend down to the eye level of a child. Use selective focusing to isolate expressions of children at the party. Creative framing and interesting compositions help enhance the mood in the picture. Photograph/Nurshaela

The Venue is Important too!
A child will always remember the place where he/she celebrated his/her birthday. So whether the venue is your house, a restaurant or a park, try to include the environment in some photographs to capture the feel of the party.
Once you are done shooting, you can arrange your pictures in the form of a collage, an album, or even an audio-visual. Towards the end of the party, connect the camera to a television and play the images so that everyone can look back at the fun. Undoubtedly, great photographs help make the special day a lot more memorable.

How to Avoid ‘Candle Ghosts’ in Your Photographs When you point your camera straight into a light source, ghost-like images of the light get formed in the image. This usually occurs in compact cameras and DSLRs with low-end lenses. This problem often comes up, especially when taking a photograph of the candles on a cake. You will, in fact, be able to notice a hint of the ghosting while looking through the viewfinder.

To get a ghost-free image, alter your position with respect to the candle flame. Shoot from a higher or lower angle to avoid ghosting. If this is not possible, use a lens hood or cup your lens with your hand. If nothing seems to work and the ghosting continues to occur, ensure that the ‘candle ghosts’ are in a part of the frame that does not distract, and they do not block someone’s face.

This article originally appeared in the March 2009 issue of Better Photography. 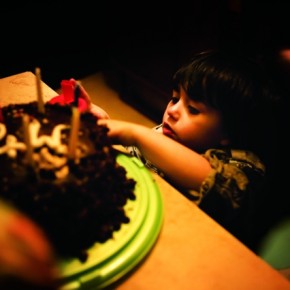 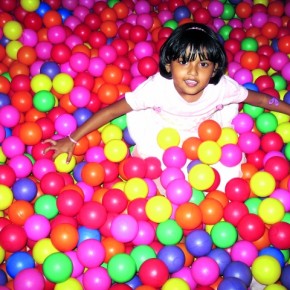 Inflatable castles with sea of colourful balls and balloons are quite popular in kids’ birthday parties. They make vibrant and lively pictures too, because of their candybright colours. Photograph/Cynthia Sapna 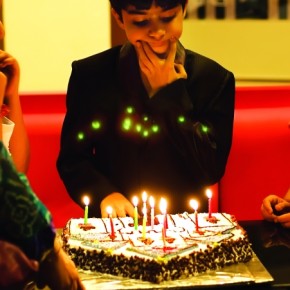 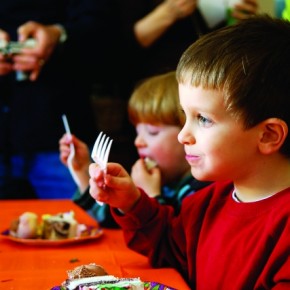 Capture expressions, especially during snacks. Use a shallow depth-offield to blur distractions in the background. Photograph/Ben Mcleod 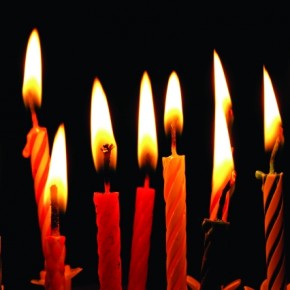 Candles make great subjects too! Zoom in close and shade the lens with your hand to avoid flaring or ghosting. Photograph/Steve Woods 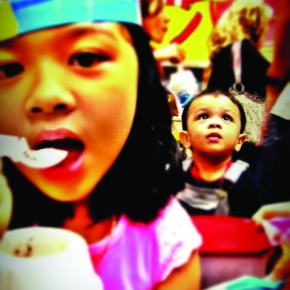 Use selective focusing to isolate expressions of children at the party. Creative framing and interesting compositions help enhance the mood in the picture. Photograph/Nurshaela 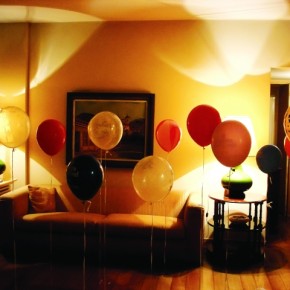 Images shot before the arrival of the guests help emphasise the pre-party preparations and can make your overall set of pictures more complete. Photograph/Ana Maria Santeiro