This is a Garden Lizard, which can be easily found in the parks or gardens. This image was shot while this male was chasing a female for mating. Photograph/Amol Patwardhan

Neha Mutreja breaks the myth that wildlife photos can be made only in the wild, by reintroducing you to the animals that have been living with you all along, within the city.

How often have we travelled to far-off sanctuaries and forests to capture wildlife within our cameras? However, we tend to ignore the common species that can be found in our very own city. Even the most common and less exotic species can offer many spectacular photographic opportunities. Essentially, you need to keep your eyes peeled, notice the tiny creatures around you and treat this quest as a treasure hunt. You will be amazed by the kind of urban wildlife around you that tend to go unnoticed.

The Search Begins at Home!
The first step towards exploring photographic opportunities is to approach creatures that are accustomed to people. To do this, you can begin observing the insect or animal life that is attracted to the garden in your backyard or the potted plants in your balcony. You do not even need to venture out of your house to take a safari!

Dig into Your Backyard
When was the last time you took a stroll down your lane and observed sparrows frolicking around, or even seen a frog croaking merrily in a park? Worry not; you can fix this by visiting a garden near your home. You can even visit nature parks or reserves located a few kilometres out of your city. Not only would these visits be enjoyable outings, they would also be a great way to train your eyes to spot the natural species that reside in these places.

Bury Your Nose in Books
Besides spending time observing creatures, you can pore into research books about your town or city and get relevant information on the species you want to photograph. This research will tell you whether the city is visited by migratory birds or whether there is any specific place that is famous for its animal or bird sightings such as a particular lake, marshland or seafront. It will also help you understand the behaviour of the creature and help you capture its defining characteristics. For instance, ants have entire colonies that are very well-structured—they have definite work processes for gathering food, transporting larvae and so on. Once you know their various activities, you can shoot them making their way around the plants in your house or even large anthills found in large grounds.

Breakfast, Lunch-time and Supper
Getting up early in the morning and staying back after sunset can help you observe different species going about their day in a busy city. Make it a practice to observe all animal activities during this time period. Most birds and animals venture out at sunrise to hunt for food and return homewards at sundown, while nocturnal animals like owls and bats hunt at night. Even butterflies visit flowers at a particular time after they have bloomed. The light at different times of the day makes a difference too. Mornings and late evenings can get you great silhouettes. Such observation will help you understand the behaviour of your subject better.

Squeeze Yourself into Nooks and Crannies

Though there are a whole range of subjects which can be easily spotted in the city, you need to dedicatedly pursue them and plan ahead to get great results. Riverfronts, lakefronts and sea fronts can attract seafaring birds like sea gulls and albatrosses. You can even find sea shells, mussels, hermit crabs and other such tiny creatures on beaches.
In parks or gardens around you, you can spot squirrels, bees, chameleons, mynahs, cuckoos and parrots frisking around. If you move in closer to the plants, you can notice spiders spinning their webs, caterpillars feeding on leaves, and ladybirds feeding on pollen. You can also find tadpoles, dragonflies and tiny crabs near ponds and other water bodies. Lift a rock and you can find earthworms or even centipedes and millipedes that have made it their home.

Familiarity with Predators
Creatures like rodents and big predatory birds can also make for magnificent pictures. In order to spot scavenging birds like crows and vultures, look for them near waste dumps and slaughter houses. You can usually find them perched on trees close to their food-providing areas. Also, fruit bats can be easily spotted hanging upside down in trees, or nesting inside buildings. Indian cities are the best places for kites to breed and hunt. These large birds of prey eat carcasses and can be seen hovering in large circles or gliding high above concrete roads. You might spot them swooping down to grab their prey.

Changing with the Seasons
Changing seasons bring along a whole range of animals. Winters attract migratory birds like cranes and flamingos to water bodies while spring welcomes hummingbirds, chipmunks, dragonflies, frogs and more. Monsoons can also coax some creatures like grass snakes, snails, earthworms and others to make an appearance. Finding out more about the preferred season of your subject can help you take great images.

Plants are a Creature’s Best Friend
Besides prowling in your locality or city, you can also make your garden a lot more wildlife friendly. Insects and other tiny creatures are attracted to plants, so you can keep pots of flowering plants that bear nectar. You can also grow shrubs, fruit plants, trees in your garden. However, do not spray pesticides on your plants as they can harm these visiting creatures.
Another way to attract birds and insects is to make a small pond or keep a bowl of water. Thirsty animals will visit this cool respite, allowing you to take a candid, yet riveting picture. You can even place a bird feeder as this will also attract squirrels and small birds.
Research, observation and exploration of urban wildlife is unending. All one needs to do is make some time to go out and explore this fabulous world. You will find that perfect animal picture just outside your house or just outside your city. Start with the tiniest of creatures and eventually you will find that each nook and corner of a city is alive and breathing with all forms of wildlife. 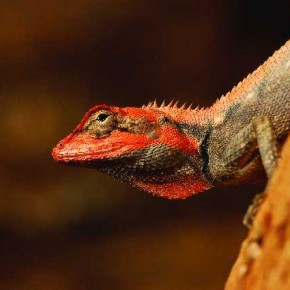 This is a Garden Lizard, which can be easily found in the parks or gardens. This image was shot while this male was chasing a female for mating. Photograph/Amol Patwardhan 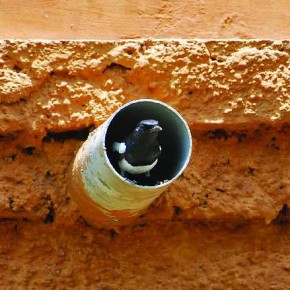 Observe and spot birds that commonly visit your house, just like this Magpie Robin, which was nesting in a terrace drain pipe. Photograph/Shyam Ghate 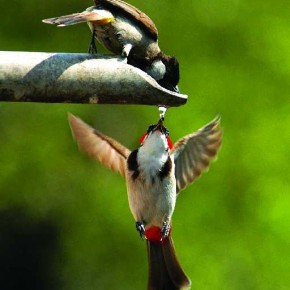 Going to the right location is half the task, as seen in this image shot near a creek in Mumbai. Photograph/Kedar Bhat 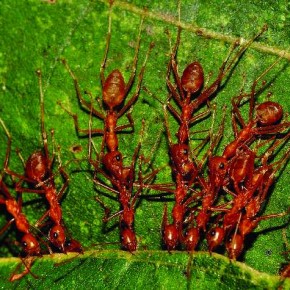 These are fire ants or weaver ants, commonly found in the city. They build nests on trees by pulling leaves together. If provoked, they can even attack a human being. Photograph/Yuwaraj Gurjar 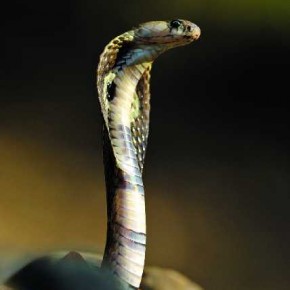 Cobras are commonly found in undergrowths in urban areas. Snakes must only be photographed in controlled conditions. Like this one, some are highly venomous. Photograph/Kedar Bhat 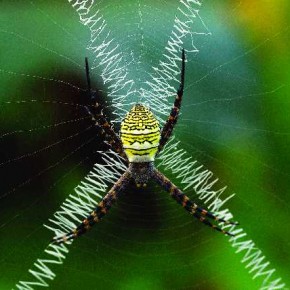 This is a signature spider. It is named so, because of the peculiar white strokes in the web which is its signature. Photograph/Kedar Bhat 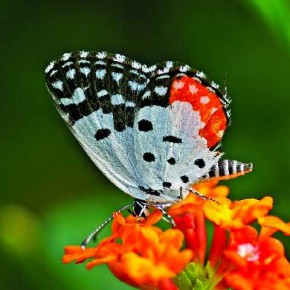 This is an image of a Red Pierrot butterfly commonly found in gardens. It generally sits on short plants and food sources and has slow fluttering speed, which makes it slightly easy to photograph. Photograph/Girish Vaze 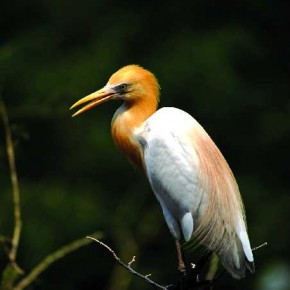 Easily found all over the city, Egrets can usually be seen nesting in colonies. This particular image was shot in Thane, Mumbai. Photograph/Kedar Bhat