Beauty in Abstraction and Intimidation 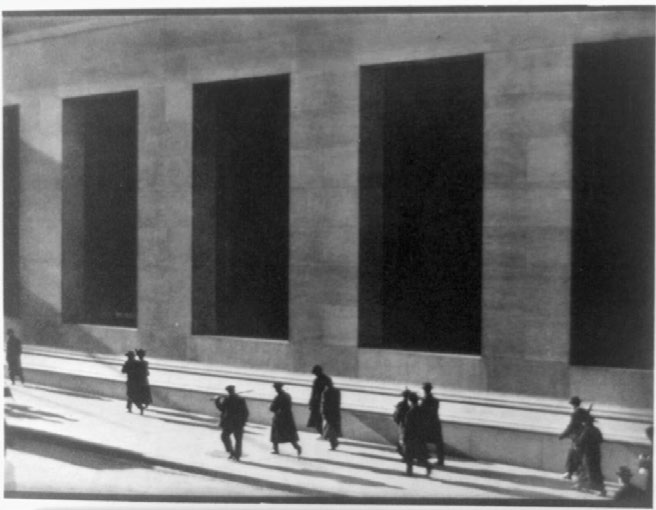 The photograph above, titled New York (Wall Street), is one of Paul Strand’s most famous and widely produced images. Its eminence originates from Strand’s departure from pictorialism to straight photography, the latter defined by the sharp focus and detail maintained in the image. Shot in 1916, the photograph was made in the morning, from the steps of the New York Federal Hall, during rush hour. The people depicted in the image are workers walking past the J. P. Morgan and Co. building on Wall Street, one of the most expensive areas of real estate in New York City. The image elicits beauty in abstraction in the way that the shadows are projected in the image. At the same time, the picture also projects a kind of warning with the dwarfed shadows of the individuals against the menacing walls of the building, attesting to the cutthroat business of finance vis-à-vis capitalism. The picture encapsulates Strand’s directness as well as his attention to detail.

Strand’s photograph has been hailed as an icon of modernism and the image that redefined the art of photography. In 1917, Alfred Stieglitz described Strand’s photography as “brutally direct. Devoid of all film-flam; devoid of trickery and of any ‘ism’.” Milton W. Brown, a critic, had said that Strand’s image “did much to lead American photography toward sharp focus realism as well as abstraction, toward urban subjects and the machine aesthetic.”