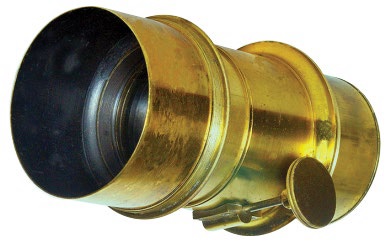 The invention of the daguerreotype was followed by a great interest by many to further develop optic work, and to reduce exposure time. Charles Chevalier, a French optician and microscope maker designed two lenses, the first with an aperture of f/15, and the second with f/5.6. Besides still being slow, the devices lacked sharpness. Meanwhile, in Vienna, Joseph Petzval laboured over complex calculations to present improved lenses for both portrait and landscape photography. The Petzval Porträtobjektiv was a double achromatic objective lens which contained four lenses in three groups. It had a focal length of 160mm, an aperture of f/3.6, and produced close to no distortion. The resulting images were sharp at the centre, with noticeable field curvature and vignetting. It was the first lens made on the basis of scientific calculation, and the characteristics are still considered appealing for portraiture.