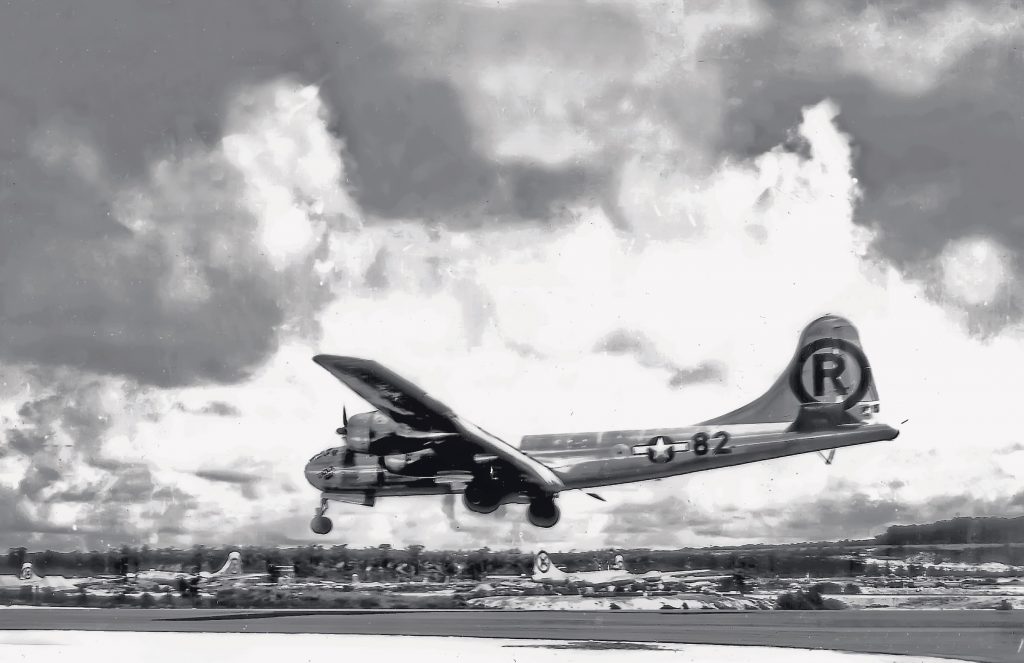 History has a peculiar way of carving connections. While some events seem inevitable, or possess logical progression, others can be downright eerie. Sample Mary Ridenbaugh’s Enola; or, Her Fatal Mistake (1886), and its opening lines, “Oh, fatal day–oh, day of sorrow; It was no trouble she could borrow; But in the future she could see; The clouds of infelicity.” The aircraft in this photograph is the Boeing B-29 Superfortress that carried Little Boy, the world’s first combat atomic bomb. Here, it is seen safely touching base on Tinian, in the Northern Mariana Islands, right after unleashing its devastating cargo upon the people of Hiroshima, in 1945. And the aircraft’s name—Enola Gay—seemed a sinister augur for what was to happen to the city.

Almost immediately after landing from this twelve-hour journey, pilot and U.S. Air Force Colonel Paul W. Tibbets, Jr. was awarded the Distinguished Service Cross for a textbookperfect mission. He had named the bomber—which Tibbets personally selected during manufacturing—after his mother, Enola Gay Tibbets. And Mrs. Tibbets, it turns out, had been named after Ridenbaugh’s book.

Part of the 509th Composite Division, the Enola Gay bore two different tail markings. While the 509th B-29s originally featured a forward-pointing arrow in a circle, the Enola Gay was given the symbol of the 6th Bomb Group, 313th Wing at Tinian to confuse prowling eyes—it is the same black, circle-R seen in this photograph. Days after the photograph was taken, the Enola Gay flew as an advance weather reconnaissance aircraft for the bombing of Nagasaki. Maintained by the Smithsonian Institute, this notorious airship now stands at the Steven F. Udvar-Hazy Center in Chantilly, Virginia.