I prefer shooting these photographs in my balcony because it is secluded from the rest of the house. This means that I can work in peace and I can quickly get inside the house if it gets too cold. Photograph/Alexey Kljatov

Alexey Kljatov loves to photograph snow in a way not usually seen by the naked eye. Here is a look at his delicate world of beautiful snow crystals.

Ever since I purchased my first digital camera, I became fascinated with macro photography. I did not think that it was possible to capture such tiny worlds using the Macro mode of a compact camera. Like most beginners, I immediately took to making photographs of flowers and ladybugs, until I accidentally discovered snowflakes.

I was casually browsing through different websites when I came across images of beautifully photographed snow crystals. This was when I decided to begin my very own snowflake project.

My Perspective
To be honest, I wasn’t quite successful during my first few trials of shooting the tiny crystalline beauties. But even through these unsuccessful attempts, I could make out the shape and pattern of the snow crystals amidst all the noise and camera shake from my 12MP compact camera. This was encouraging. From then on, I went about experimenting with different setups and lighting conditions, until I figured out a simple macro setup. This helped me achieve a whole new level of precision in my photographs. When I first started the project, I converted a plastic bottle into a makeshift tripod to shoot vertical images of the snow crystals placed on the glass. Photograph/Alexey Kljatov

The Process
My images may look complicated, but they are quite easy to create. One method that I use to shoot snow crystals is, placing an old woolen sweater on a stool and waiting for snow to fall on it. After this, I spot meter from where the snow crystal is located.

I also enjoy photographing backlit transparent crystals. I do this by placing a large slab of glass on the legs of an upside down stool. Then, I set the camera over the area I want to shoot, at a timer of around 2–3 seconds, in order to avoid camera shake.

Whenever I shoot for this project, I end up making a lot of photographs. So, the editing process keeps me more or less occupied most of the times. However, I enjoy other kinds of photography like light painting and creating HDR photos of the beautiful night cityscape in Moscow, Russia, as well.

My Equipment: I used a Canon PowerShot A650 with a Helios 44M-5 58mm f/2 lens. I reverse mounted the lens onto the original lens of the A650. All of this was attached to a 30cm wooden board. In case I was photographing an overhead shot of the crystal on glass, I attached three extension rings to the lens. This helped in keeping the lens at an optimal focusing distance from the glass that held the crystals.

Tips to Keep in Mind When Making Macros of Snow

— As told to Conchita Fernandes
To view more images by Alexey, you can visit www.chaoticmind75.blogspot.in

This article originally appeared in the April 2016 issue of Better Photography. 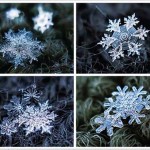 I shoot several identical photos of the same snow crystal. Later, I combine them to retrieve more detail and reduce noise in the overall image. Photograph/Alexey Kljatov 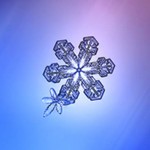 There is always a minimum distance of 1–3 cm between the lens attached to the camera and the snow crystal. Photograph/Alexey Kljatov 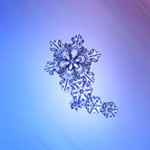 My photographs involve a good amount of postprocessing. This includes removing dust and ice debris. In the images with the woollen background, I try to add a blueish tinge to the sweater. Photograph/Alexey Kljatov There were a lot of trial and errors in the project, but I have learned from them. From shooting in dark corners of my house to the camera’s shadow covering the crystal, I have done it all. Photograph/Alexey Kljatov