31 exposures shot at f/11, were stacked to show the 10–11pm outbound crunch at the San Francisco International Airport. Photograph/Terence Chang

Terence Chang discusses photographing light trails made by airplanes and falling in love with their powerful flights.

One night, I was photographing boats at a marina or a small dock. Since the marina was near an airport, each photograph had trails of light made by planes, in the background. So, I tried shooting a plane moving across the sky, reflected in the water. I could see some poetry in the photo, and I decided to explore these fascinating light trails further.

My Perspective
While photographing this series, I realised that I enjoyed watching planes take off. There is a sense of romance to jet travel and a drama to the entire process. When I was manually controlling the shutter, I would try to judge when the planes would move out of the frame or fade from view. At other times, this project was just a matter of waiting and contemplating.

To estimate the final exposure, I make some test shots at 30 seconds and f/5. Then, I use a remote release and shoot an exposure of about two minutes. Alternatively, I make several shorter exposures to record the flight of each plane, which I combine using a process called stacking. If the amount of light pollution in the frame suddenly seems to increase, I stop the exposure.

After this, the image needs to be fine tuned on Photoshop. I sometimes use Layer Masks and HDR techniques to minimise glare and ensure that the background is exposed properly.

My Equipment: I made these photos with a Canon EOS 50D and a 17–55mm lens and a 70–200mm f/4L lens. You do not need special equipment, just some patience and the right location.

To view more of Terence’s photographs, you can visit http://www.flickr.com/photos/exxonvaldez 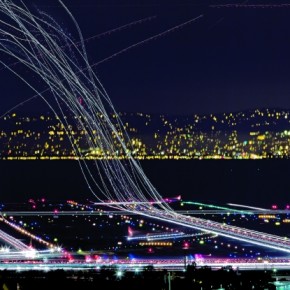 31 exposures shot at f/11, were stacked to show the 10–11pm outbound crunch at the San Francisco International Airport. Photograph/Terence Chang 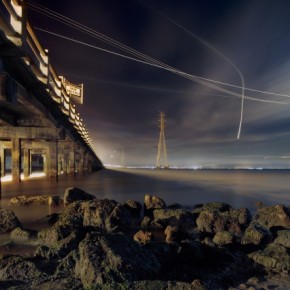 An HDR image and a composite of several exposures made at f/11, this photo shows planes headed for the airport, descending past a bridge. Photograph/Terence Chang 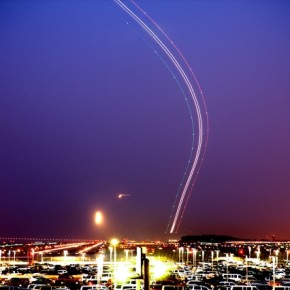 An exposure of 26sec, this high contrast image shows a plane taking off during twilight. Photograph/Terence Chang

Made out of four exposures that were shot at f/18, this is a head on view of several takeoffs. Photograph/Terence Chang 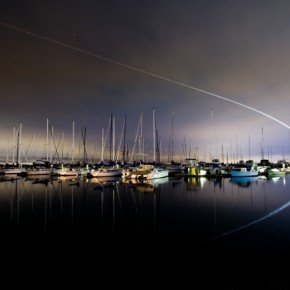 This image of a plane taking off and going over a marina was an 80sec long exposure, made at f/5. Photograph/Terence Chang