A Window in the Sky You can compose a frame by including the airplane window as well as the clouds outside. This creates a feeling of actually peeping through a window in the heavens. Exposure: 1/1250sec at f/4. Photograph/Bhaskar Dutta

When Bhaskar Dutta shot an image of the outside view from inside an airplane, he was surprised at the unique perspective. He shares these stunning vistas.

While making frequent airplane journeys, it occurred to me that shooting pictures from the plane would give me a unique vantage point as well as unusual vistas. Usually, I have a camera in my hand baggage during the flight. Once, I acted on an impulse and took a few pictures from my window seat. I was stunned by the outcome and when I viewed the final results on a computer, I felt inspired enough to do a series of photographs from my ‘window in the sky’.

My Perspective
The world looks completely different when seen from an aerial perspective. Everything seems minimised to scale models—entire cities, rivers, forests and even mountains look amazingly miniature from that height. I was awestruck by what I was seeing. In a way, it is challenging to take good photographs from the window of an airplane. Most professional aerial photographers hire a helicopter or their private aerial vehicle to make stunning photographs. Of course, they face a different set of challenges.

However, I discovered that the right settings and some practice could help me make a beautiful record of my journey as well as the world around me.

The Process
For me, the picture-making process started right at the seat-booking stage. I always insisted on a window seat. But I avoided ones that were not located behind a wing of the aircraft, as it would block most of the view. At some point, I also learned that photos made from these seats could get blurred by the engine’s exhaust. To avoid glare, I booked a seat on the side of the aircraft that faced away from the sun. Eventually, I found that the first and last window seats usually provide the best photo opportunities.

From my seat, I would look for a point of interest that could bring my shots to life. My subject could b e a meandering river, a nice cloud formation, a coastline, an island or even a city with various buildings and skyscrapers. While trying to capture a distinct aspect of each of my subjects, I realised that wide-angle shots are better than zoomed-in ones. This way, I could crop the picture as per my requirements. Also, I did not discard an otherwise wonderful shot, just because a part of the window is visible. Sometimes, this adds to the picture. Alternatively, it can always be removed.

Another thing I did was to keep my camera close to the window to minimise reflections from within the airplane. Mostly, I used manual focus if I was using a DSLR and a fast enough shutterspeed, especially at low altitudes. This was to prevent the vibration of the plane from ruining my photographs. Also, I used the highest ISO values at which I could achieve clean images. Once I settled on the subject and the frame, after considering the settings, all I would need to do is release the shutter!

While shooting from the airplane, I realised that there are far too many scenes that look amazing. However, I found that some of these captures would look washed-out and would lack a certain richness of colour. So, I post-processed my images in Photoshop Elements 7 to bring back vibrant colours and to recover lost detail.

The world is a beautiful place and there is a stunning scene to capture in every journey. Of course, these scenes may be hard to capture because of the speed of the airplane, a blocked view from the window or any other reason. At such times, I discovered that it was best to simply sit back and enjoy the view from the heavens.

My Equipment: I have used a Nikon D5000 along with the 18–55mm kit lens. I also used a compact camera, Canon PowerShot S3, for this assignment.

Get Fabulous Pictures from Within an Airplane 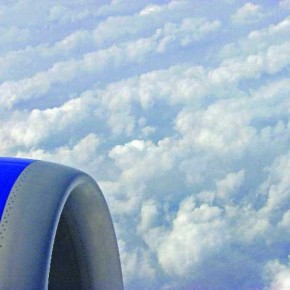 Sometimes, the fluffy white clouds make one feel that there is a bed of cotton in the sky. Exposure: 1/1600sec at f/4.5. Photograph/Bhaskar Dutta 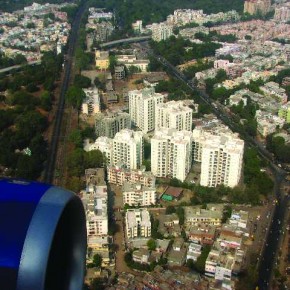 Here, one can see a bird’s eye view of a city with multi-storeyed buildings. Exposure: 1/800sec at f/4. Photograph/Bhaskar Dutta 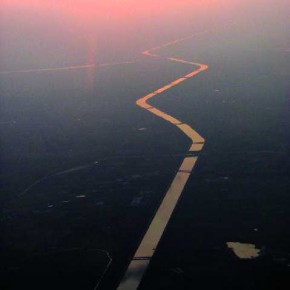 This is a canal that looks like a zigzag line with golden light reflecting off its surface. Exposure: 1/125sec at f/3.5. Photograph/Bhaskar Dutta 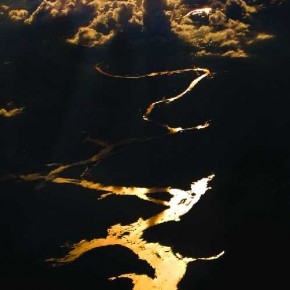 In this image, I tried to capture the rays of the setting sun falling on a river from, appearing from behind the cloud. Exposure: 1/1000sec at f/4. Photograph/Bhaskar Dutta 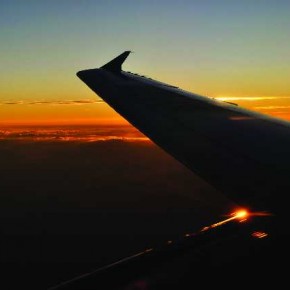 You can even explore sunsets and sunrises as they cast a wonderful glow over the horizon. Exposure: 1/200sec at f/7.1. Photograph/Bhaskar Dutta