In his hometown of Lucknow, Taha Ahmad makes a compelling story about the artisans practising mukaish work in dwindling numbers. 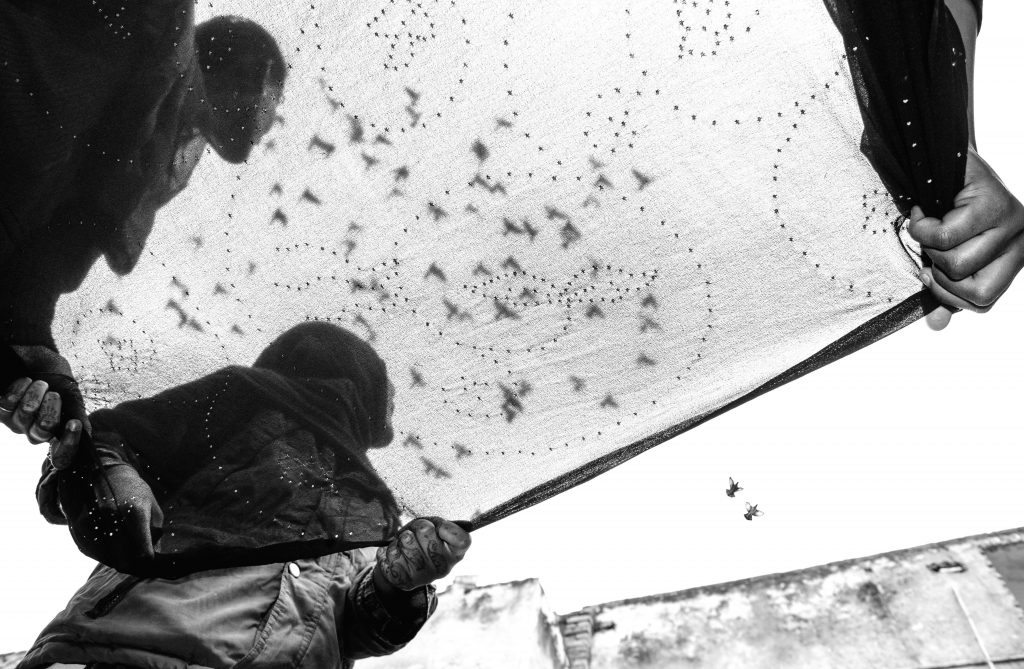 Children and grandchildren of one of the badlas straighten a fabric after it was washed. Photograph/Taha Ahmad 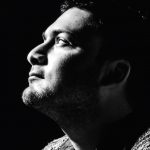 Playing in the narrow lanes of Old Lucknow as a child, I was no stranger to the karkhanas or warehouses where artisans would practice mukaish work. An elaborate embroidery form, it arrived in Lucknow centuries ago, and was made with gold and silver threads for the ruling classes. The craftsmen or badlas, would weave and twist the metallic threads through the cloth to create intricate designs. Over time, other famous crafts of Lucknow, like chikankari spread far and wide, but mukaish was relegated to the narrow gallis of the city, the badlas waning in numbers. 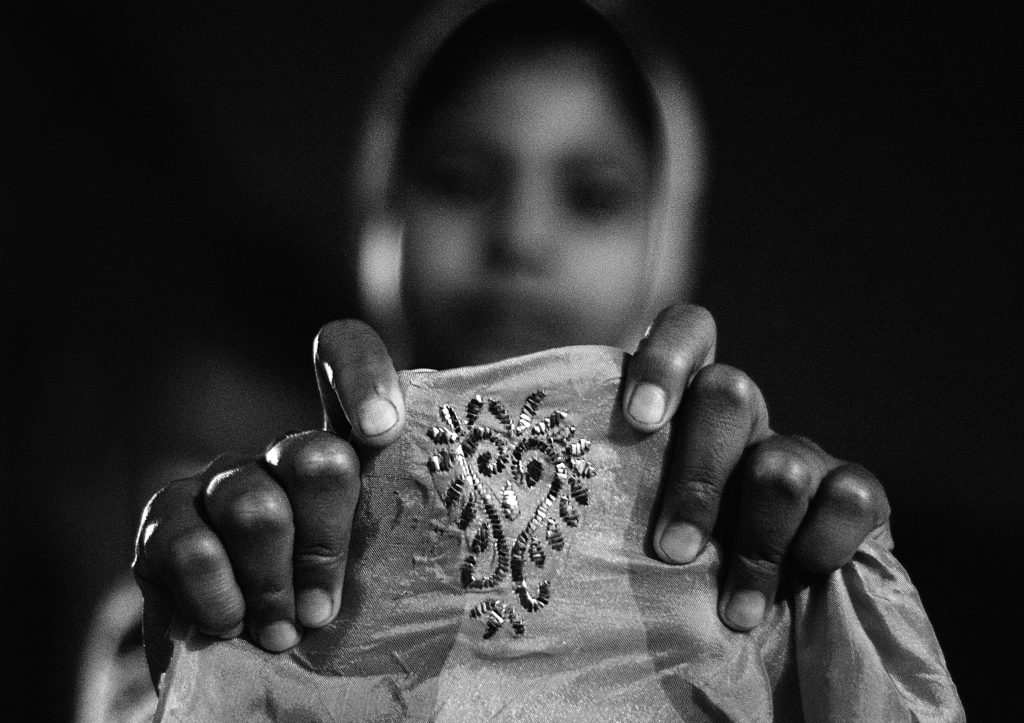 Through my photographs, I am trying to tell the story of these artisans—the story of their struggle, survival and downfall. Incredibly demanding and labour intensive, the art form is dying in Lucknow. Where the city once flourished with over 3000 excellent craftsmen, there are only about 20-25 left, all of them aged 65 and above. The badlas and their families work in warehouses that are small, dingy claustrophobic spaces. 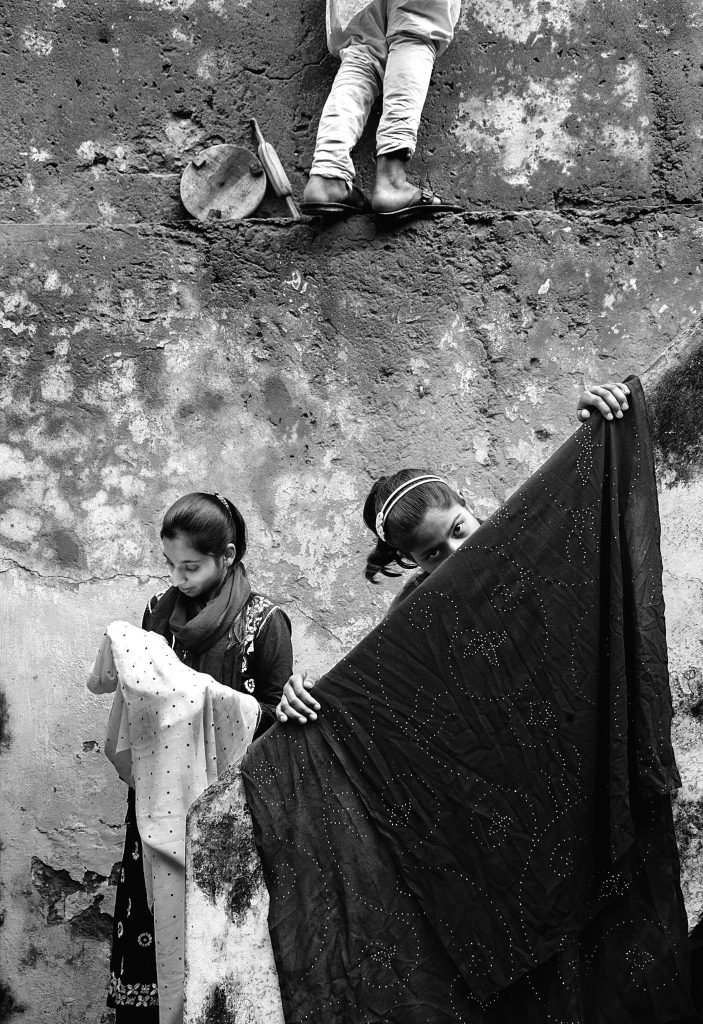 Ruqsana, peeps from behind a mukaish work fabric hung in the yard of her house. Her sister Farheen, inspects a mark on a dress that was caused by ink powder, used during the printing process. Photograph/Taha Ahmed

Gaining the trust of the artisans to allow me to photograph them was a complicated process. They were disturbed and angry because of the apathy of the government and the production owners. This made them wary of an outsider trying to photograph them. The women were sceptical too, as they were veiled and uncomfortable with the camera. But I persisted and over two weeks I was able to get them to open up their lives to me. It’s been over 9 months and I still go back to shoot the badlas and their community, hoping to cast a light on their plight.

Taha Ahmad is a documentary photographer based in Delhi, who feels photography has a strong influence in creating and developing discourse for the future. Currently, Taha is pursuing his Masters in Fine Arts from Jamia Milllia Islamia and is being mentored by Delhi based photographer, Sandeep Biswas.

This project was initiated under the aegis of the Neel Dongre Awards/Grants for Excellence in Photography 2016-17. The theme was Life as Beauty: The Vanishing Crafts of India and the awards organised by the India Photo Archive Foundation, under the guidance of Parthiv Shah and Aditya Arya. 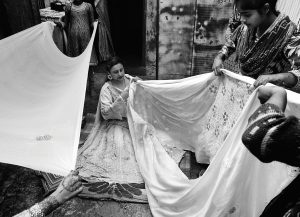 Zeenat unfolds the mukaish work fabric made of actual gold and silver wires, kept as an archive of the royal craft. Photograph/Taha Ahmad 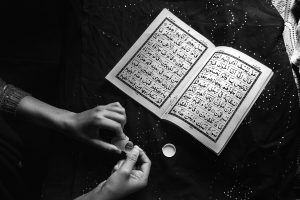 The badlas are Muslims of the Hussainabad and Sa-adatganj area of Old Luknow. Every morning, they recite verses from the Quran before beginning their work. Photograph/Taha Ahmad 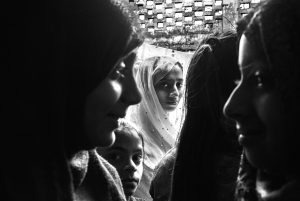 Farheen wears a real silver mukaish work dupatta made by her father, who is a 65-year-old artisan. Photograph/Taha Ahamd 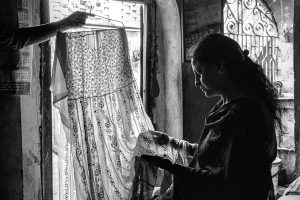 A dress with mukaish work being inspected. Photograph/Taha Ahmad 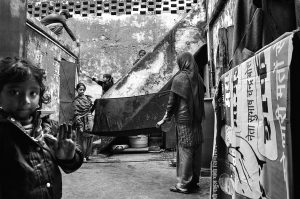 Young family members of a badla fold the cloth after ironing, which will later be packaged. Photograph/Taha Ahmad 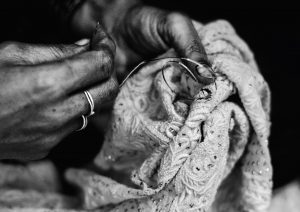 The wife of a badla practises takaayi, an embroidery technique in the mukaish work, in her spare time. Photograph/Taha Ahmad 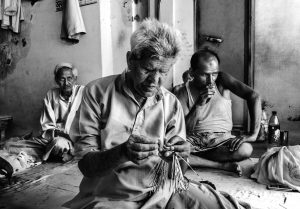 The last remaining craftsmen are seen in their workshop. Photograph/Taha Ahmad 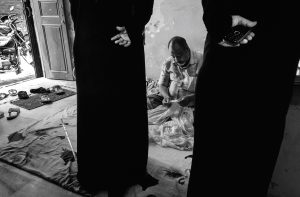 Two woman observe Mr. Bobby, owner of the Sa-datganj workshop, as he inspects the quality of a finished fabric. Photograph/Taha Ahmad 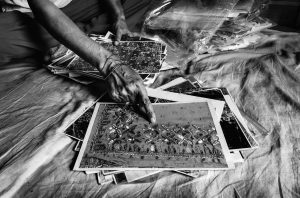 Badlas show the handmade paper designs which were used for the reference at the defunct Chowdhary Garaiyya Workshop in Old Lucknow. Photograph/Taha Ahmad 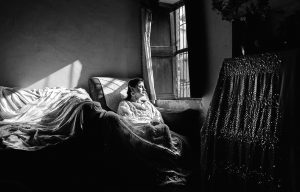 Zeenat wears a mukaish work dress crafted in the 18th century, a time when Nawabs ruled the land. Photograph/Taha Ahmad