A Taste of the Wild East 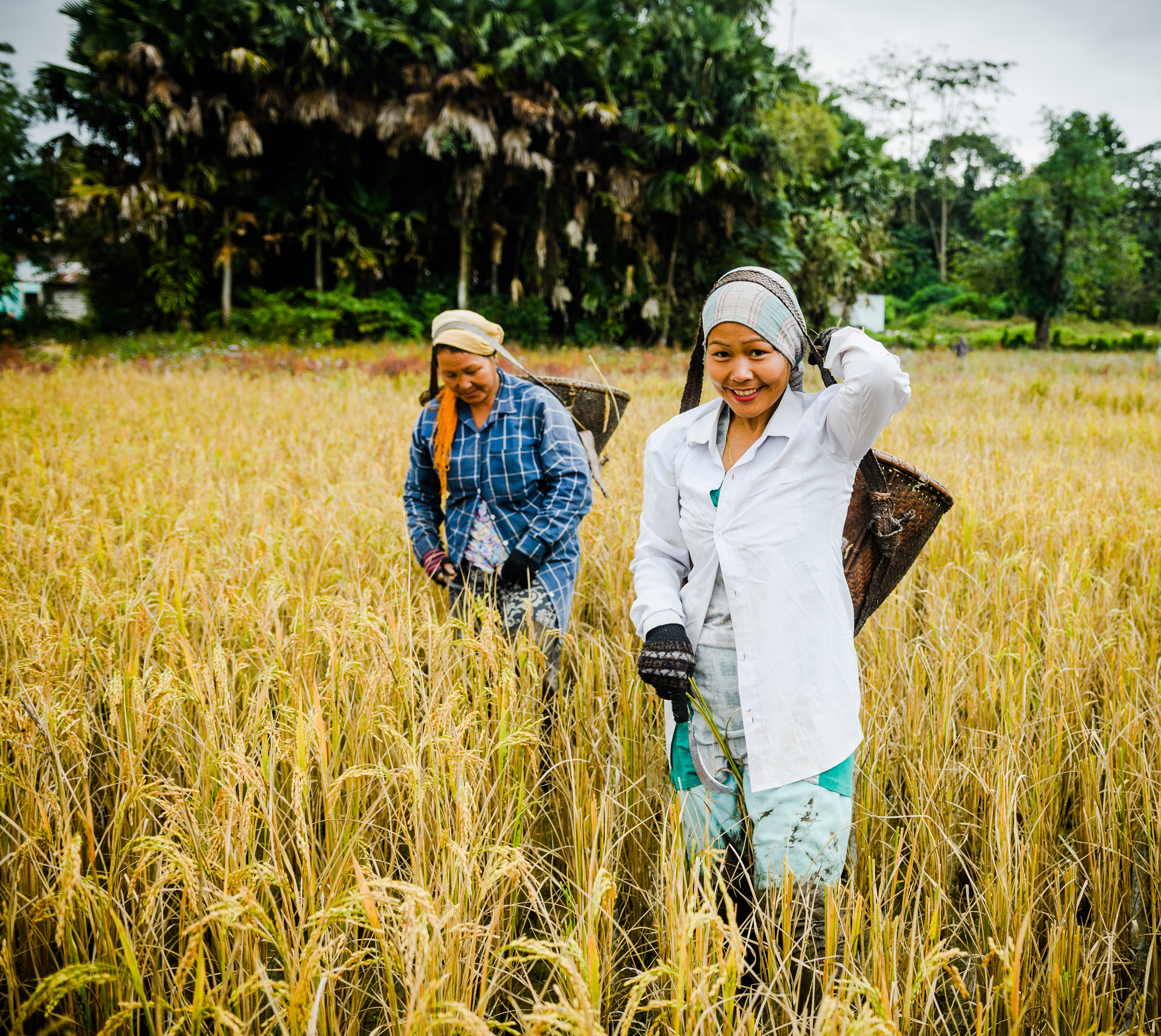 Women from Galo tribe harvesting rice in Basar. Most households here organically grow their own rice. 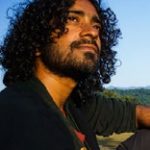 Six years ago, while I was working on a feature for a travel magazine on Arunachal Pradesh, I met some of the most warm and welcoming indigenous people. Their culture, uncomplicated ways and joyful coexistence with nature impressed me. At some point, I found myself naturally shifting course, and getting more involved with the community—an attachment that led me to work on a photography-centered book that would highlight the indigenous way of life, told through food and the various traditions around it. Food is perhaps the most accessible and easiest to relate to, since eating is universal to all beings, and our approach to food shapes us. After all, we are what we eat. And so, I chose tribal food as a way in. The hearth, fire and kitchen are also the physical and cultural centre, in some ways, a ‘living room’ of the traditional tribal home. It’s a place where not just cooking, but also social life and rituals take place.

There are 26 officially recognised indigenous tribes in Arunachal with their own identity and cuisine. What a community traditionally eats is defined by what’s available around them, which again depends on the landscape. Factors such as forest foods, or the kind of livestock or cultivation that a terrain allows, and where each tribe has historically migrated from also strongly influences their choice of food. For instance, the Tai Khamtis and Tangsas, who migrated from modern day Myanmar and beyond, prepare food that is quite similar to Thai-Burmese cuisine. In other places like Tawang, which is influenced more by Tibetan Tantric Buddhism, the local Monpa community consume yak cheese and butter in their stews as a dominant flavour. 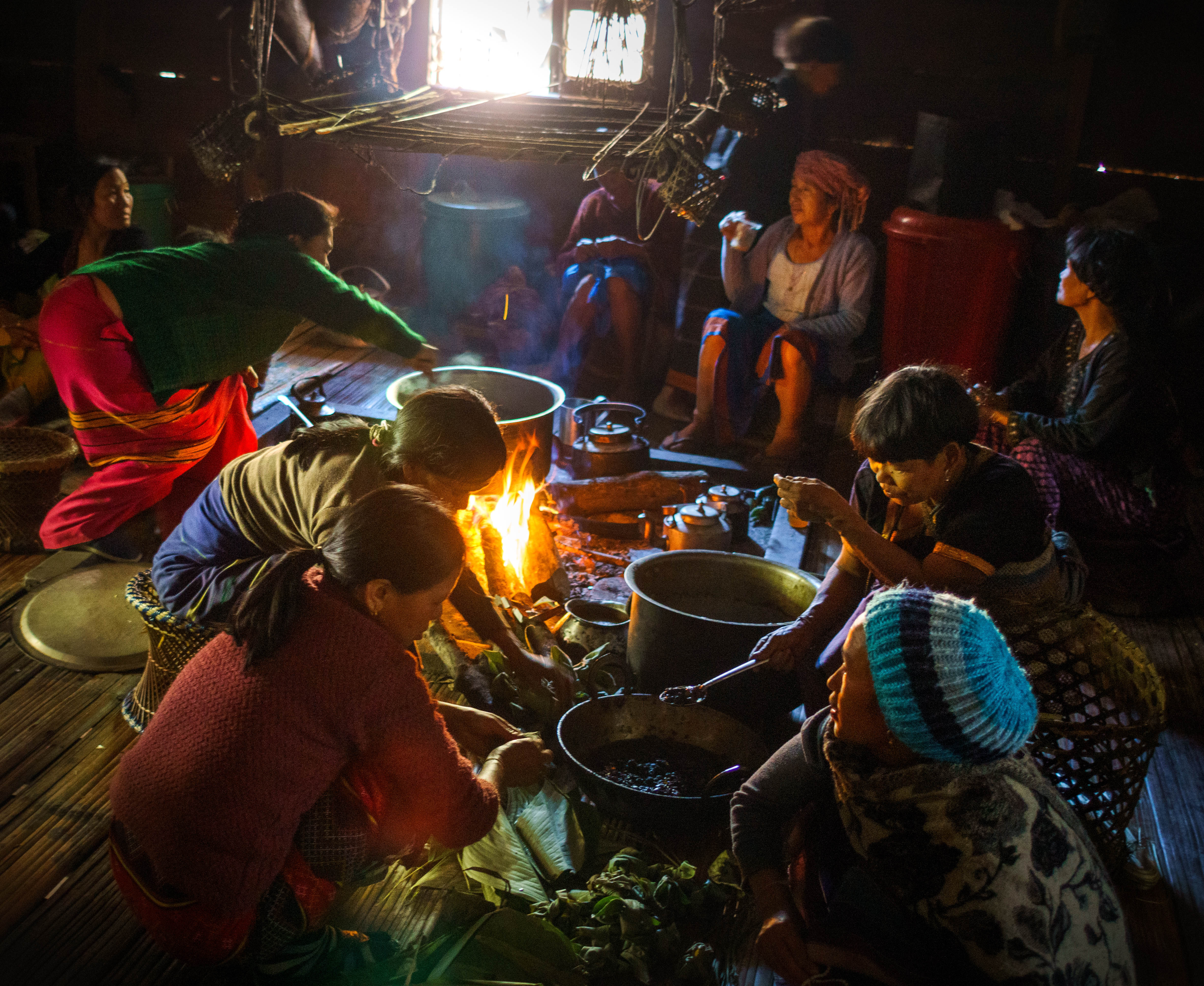 Women from the Adi tribe prepare a feast together for a wedding.

The more I familiarised myself with the food and the rituals, local socio-cultural structures, economics, and their way of life surrounding eating, the more natural it felt to use food as a pretext to immerse myself into other diverse aspects of animist and Buddhist cultures here.

This is where my bond with the locals became very helpful. Since they were aware of the kind of photographs I wanted to make, they invited me to various festivities and gatherings. I also learned how their society works—the gender roles, sustainable food practices, sources of income, and even their aspirations. I was also made aware of contemporary threats to their delicate balance. 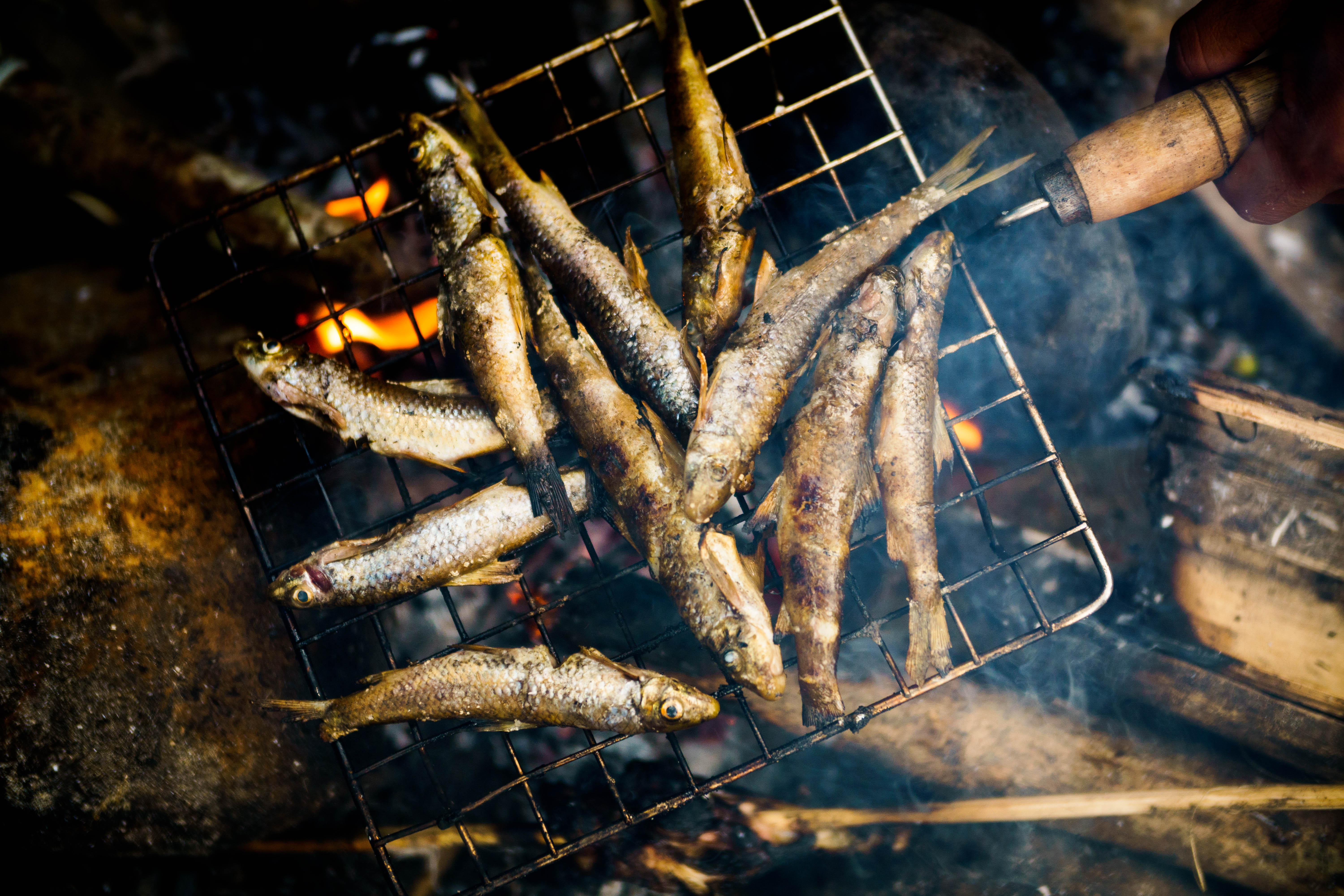 Due to deforestation and sudden, haphazard urbanisation, some communities are losing their vital contact with both wild foods and forest resources that their traditionally sustainable way of life depends on. Their aspirations of finding better job opportunities in the cities are taking them away from their roots and towards unhealthy food and volatile values. The fact that folks from urban ’mainstream’ areas neither know or value the positive aspects of tribal communities doesn’t help either. As a result, many youngsters are turning towards consumerism, easy money, and ‘development’ aspirations of urban origin, thus losing their traditional knowledge. They are also unaware that it is in fact the city dwellers who are the ‘underprivileged’ ones. Unlike tribals, we have to pay extra to procure toxin-free food, and are expected to leave our cities to be around nature.

Through this ongoing work, in addition to documenting food, I am trying to weave together a holistic, intimate portrait of the indigenous tribes. I aim to raise empathy for these delicately balanced indigenous cultures, their traditional ecological knowledge and bond with nature, while also gifting the local tribes a community mirror.

Sanjiv Valsan closely works with the indigenous people of Arunachal Pradesh and Aarey forest in Mumbai. His documentary Rewilding Aarey recently won the Megacities Short Doc award. You can find his work on Instagram (@sanjiv.valsan). As part of Mumbai’s Save Aarey Forest movement, Sanjiv is working with the local forest tribes to conserve the forest. He, along with other environmentalists, have also been working on rewilding this threatened forest and conducting tribal food and culture awareness workshops here. 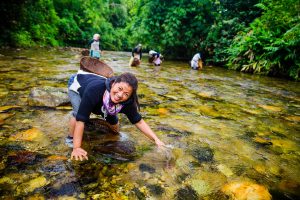 A group of women from the Galo tribe catch fish employing Tahum Kunam, a traditional fishing technique. They use a conical basket to collect small fish, crabs or prawns. At the end of the day, they share their collective catch. 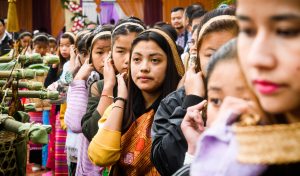 Women of the Tai Khamti indigenous tribe offering food (dry fish) as gifts for a traditional wedding ritual. Carrying food or wine as presents on foot in this manner is a custom in many tribes of this region. 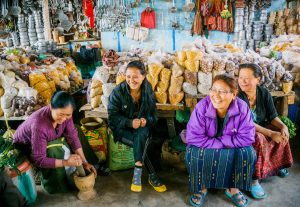 Women from the Monpa tribe preparing chutney for lunch, as well as selling traditional ingredients at the Bomdilla market. 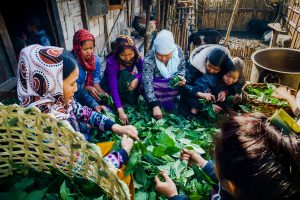 Women sorting ahona leaves for Reh, a ritual of the Idu Mishmi tribe. 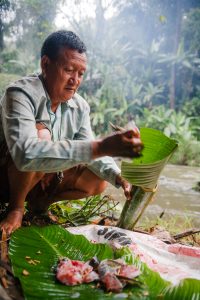 A man from the Galo tribe stuffs fish into a bamboo hollow for roasting. 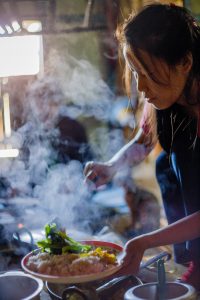 Laipatta greens are the staple food of many tribes. 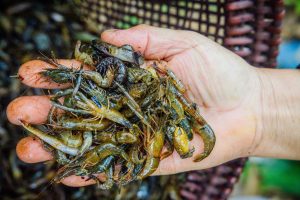 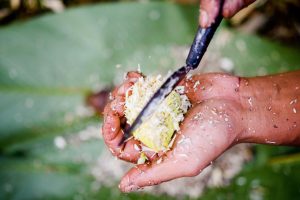 Banana flowers are an important food source in Arunachal Pradesh. 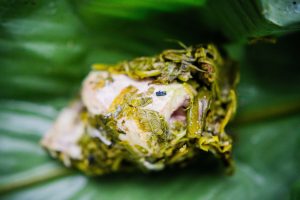 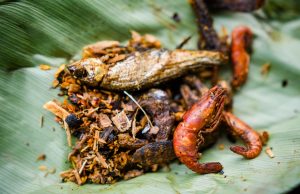 Small fish and prawns are served as a snack with poca, a homemade rice wine. 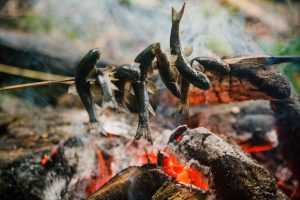 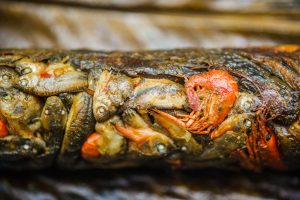 This dish, where small fish and prawns are mixed together, is prepared by the Adi tribe at Jenging, in upper Siang. 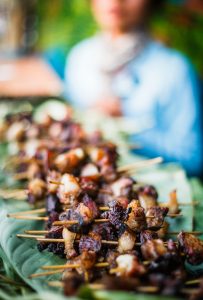 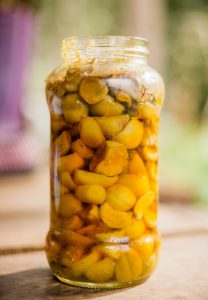 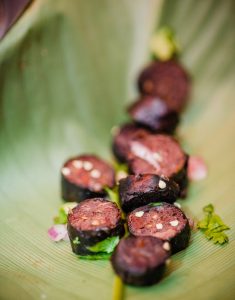 Apuwee, a spicy blood sausage of the Idu Mishmi tribe of the Dibang Valley, is cooked in bamboo hollow. 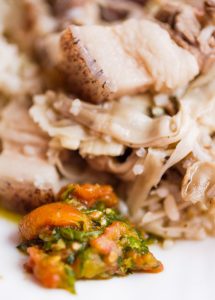 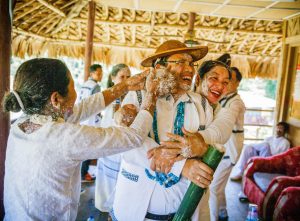 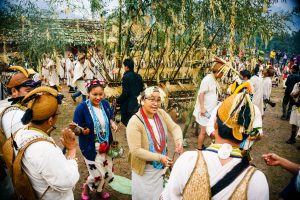 The Nyishi tribe, donning their traditional attire, offer their rituals and millet wine to the forest spirits during Nyokum 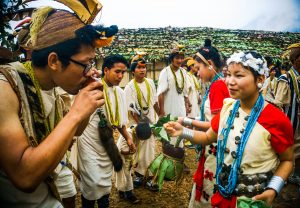 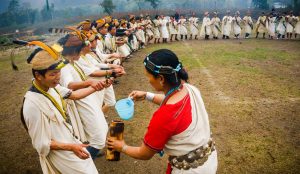 A woman from Nyishi tribe offers sweet millet wine to everyone during the Nyokum festival. 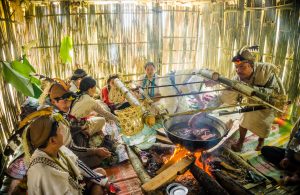 A Nyibu (shaman) of the Nyishi tribe, along with his assistants, prepare sacrificial meat on a separate hearth during the period of the Nyokum ritual chanting.